Barton Bryan is the host of The Mindset Forge Podcast, a show designed to help people achieve the mental and physical fitness they need to perform at their best.

Camp Gladiator Director for almost 10 years, Barton oversees teams of leaders and trainers who deliver the company’s outdoor group fitness programs in the Austin market. He also has an online personal training business and a very full life.

“I have personal goals, which include getting into bodybuilding and spending as much time as I can with my wife and seven-year-old son, Jack, who keeps me busy.”

Barton has always had a growth mindset and love for learning new things. He became fascinated with podcasting during quarantine. While the family was taking a road trip, his wife, Val, was raving about a particular show. When Barton listened to host Ed Mylett’s interview with Olympian snowboarder Shaun White, he was blown away.

This was the genesis of Barton’s fascination with the medium. “I realized that a podcast is a brilliant way to share ideas and engage with an audience. As I started listening to podcasts while I was working out, driving around, or doing stuff around the house, I fell in love with the format, which allows you to consume content as you please.”

Barton decided to start a podcast that would turn the focus from reps to mindset as a means of achieving peak performance—a twist one might expect from an extraordinary guy. 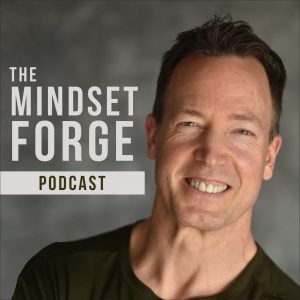 “As my acting coach used to say, ‘You’ve got to jump off the cliff.’ That’s what you have to do when you dive into starting a podcast. Embrace the chaos, which can be both scary and exhilarating.”

The 47-year-old’s approach to life is the sum of his experiences. “We grew up in Davis, California. My dad’s parents were in the foreign service, and in 1949, my grandfather contracted polio while living in the Philippines. He was 12 years old, and he never walked again. This was before a vaccine had been developed. Although he spent the rest of his life as a quadriplegic, he was the strongest man I ever knew. He did amazing things at the University of California, Davis to help other people with disabilities. That informs who I am and my thoughts on leadership and inner strength.

“My world view also changed dramatically as a result of spending two years as a Peace Corps volunteer in West Africa, in a village situated in Mauritania near the borders shared with Mali and northern Senegal. I had been to Morocco a couple of times, but I wanted to be more than a visitor. I wanted to live within a community that could shape my understanding of the world outside America.

“If I were ever to go in a new direction with another podcast, I would explore conversations about life beyond American society.”

Barton seems to be wired to thrive in situations that would intimidate most people. “In my 20s, I hitchhiked all over Europe and Morocco with nothing more than a backpack and a big smile on my face.

“I prefer to see things as an adventure, whether traveling or starting a business or podcast. Instead of stressing out over all the details, I find the adventure and excitement in unfamiliar situations. That’s one of my secrets to showing up at my best.”

He went on to explain, “I designed the The Mindset Forge Podcast to be about transformation, helping people get one percent better every day in whatever they’re doing.

“The first season is a potpourri of extraordinary people from different backgrounds who shared their failures, successes, and the lessons they’ve learned. My guests in that season included Quad Rugby Gold Medalist Mark Zupan and Dr. Colette Pierce Burnette, the president of Huston Tillotson University, a historically Black college in Austin, Texas. Dr. Pierce Burnette’s powerfully moving story helped to fuel my passion for this podcast.”

During the show’s first season, Barton hired Kevin Chemidlin, a podcast growth expert. “He challenged me to stay in one lane with my interviews and describe my podcast in 10 words.

“I thought about my background in athletics and as a singer and actor in New York. It dawned on me that when I thought of the athletes and artists among my Season 1 guests, there isn’t much difference in how they prepare and quiet their bodies, whether they are gearing up for an MMA fight or singing an aria on stage.”

Merging the performance mindsets of the athletic and performing arts worlds became the focus of the podcast from Season 2 onward.

“There’s a ton of universality in the two perspectives. Even if you’re not a performer or athlete, everyone wants to be better in life. Maybe it’s about showing up better for your kids, or a conversation with your boss, or a sales presentation. If you use some of the performance habits and preparation techniques that artists and athletes use, you’ll find ways to prepare to be at your best.”

Barton aims to make the podcast even better, too.

“I take pauses to reflect, get feedback, and listen to my heart.

“I recently decided to take a deeper look at the ways in which people can improve their body for performance, whether they’re athletes or not, using breathing techniques, for example.”

Ever focused on helping people move the needle, Barton had some parting words of advice to get the most out of the podcast right away:

“I encourage anyone who listens to my podcast for the first time to listen to one episode with a performer and another with an athlete, and prepare to be intrigued by the differences and similarities.”

Do you want to be better? If you do, The Mindset Forge Podcast is there to help. Take a listen today.