“Genealogy is a combination of skill and luck.” – Drew Smith

Have you ever wondered where you come from? Who “your people ” are? How they got here? In this ever-changing world, one uniting factor amongst human beings is that we all have ancestors. We may not know who they are, but they existed on this planet before us.

Genealogy—the study of our heritage—is one of the most practiced hobbies worldwide second only to gardening. Meetups, societies, conferences, and industries have all sprung from the study of our heritage. And, it’s not just blue-haired retired men and women finding their roots. Young and old alike tromp through cemeteries in search of elusive gravesites, road tripping their way through history.

“Cemetery visits are what genealogists do for fun,” says Drew Smith, host of The Genealogy Guys and The Genealogy Connections podcasts alongside George Morgan. These co-hosts share a healthy love of heritage and are well-respected in the field of genealogy.

Another love they share? Cats! In fact, one of their beloved cats, Fletcher, was considered a co-host of the podcasts and had his very own following. Often interrupting the shows with his own meows and musings, he even received his own fan mail!

Drew was a professor of Library Science at the University of South Florida in Tampa, FL, when he first embarked on his podcasting journey. At the time, online courses were becoming more popular for distance students, but the lack of personal relationships that often come with virtual reality tended to result in students leaving a poor rating for those types of classes. Drew discovered the fledgling podcast world in an attempt to reach and better connect with his online students. Utilizing early technology to broadcast his teachings live so his students could interact with him, Drew was able to improve class ratings. 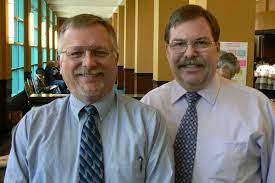 Combining the technology with their love of genealogy, Drew and George started The Genealogy Guys podcast in 2005, less than a year after Libsyn made its podcasting debut. This makes George and Drew the OG’s of Podcasting—or should we say the ‘OP’s’ (Original Podcasters)?

Choosing to model their format after the banter between Click and Clack—Tom and Ray Magliozzi of Car Talk—each episode features news, reader emails, a book review, and finally, a short interview. However, this format doesn’t for allow in-depth interviews, so they launched The Genealogy Connection podcast in 2016.

Dedicated to providing the background story of their guests, it’s clear in listening in that the pair establishes a relationship with their interviewees. Meeting their guests—a virtual “who’s who” in the genealogy world consisting of librarians to educators to technology developers—at conventions, shows, and society meetings, Drew says, “We’ve been in the industry for so long, we know just about everyone. We want our listeners to feel like they are eavesdropping on two friends chatting.”

Between the two podcasts, there are over 430 episodes, and they rank in the top seven percent with podcast listeners. They’ve also created Genealogy Guys Learn, a program for beginners to those interested in more serious genealogy-related research, to support individuals in the process of tracing their lineage.

It’s not all smooth sailing, though.

The study of genealogy is not without controversy. “One of the biggest discussions we tend to stay neutral on is whether to make a family tree public or private,” said Drew. Often dividing genealogists and families alike, Drew continues, “Having an open family tree does help research, but it also invites misinformation.”

Recent technologies have also been a hot topic of discussion in the genealogy communities. In the past, DNA testing took months to complete, whereas now, it can be done with a kit in the privacy of the home. The Genealogy Guys podcast shares with listeners the pros and cons of this home testing, as well as cautioning what to “watch out for” in terms of the results. “Who is using the tests and for what is of concern to the community, and is often a topic on the podcasts,” Drew says.

As partners in podcasting, genealogy, and life for years, George and Drew undoubtedly have that “Click and Clack” chemistry they so admire in Tom and Ray. And that extends far beyond podcasting.

Drew is a bit of a science geek—he loves the research of evolution, mathematics, and physics. He’s also recently taken up cooking and baking, even offering his listeners a recipe for a Key Lime Pound Cake on one of his episodes! His favorite podcasts are ones that involve lore and ghost stories, which he finds very entertaining. He also enjoys listening to Helen Zaltzman’s The Allusionist and Radiotopia. George is fascinated by anything and everything Pompeii, and spends a great deal of time reading and researching it.

Whether you are already an expert in the field or a weekend cemetery visitor, The Genealogy Guys and The Genealogy Connection podcasts will expand your horizons. Who knows… you might be the long-lost third cousin of George Washington or Queen Elizabeth! Listen in to learn more!