Steve Kramer was enjoying life as a morning radio personality in San Diego. That is, until 2018, when life as he knew it began to change.

The first whisper occurred when his beloved dog passed away in March. Then, one month later, the thump: his wife left him. And later that year, Steve was diagnosed with hyperacusis, a very rare hearing condition where certain frequencies can become intolerable—the brick upside the head.

“Things that were normal volume sounded way super loud to me and would cause physical pain. Obviously, with me working in audio, it was a real challenge.”

In January 2020, just after the new year, Steve’s brick wall came down when, after five years of hosting his successful morning show, he was let go. Steve recounts:

“So I was sitting there, kind of in the depths of my despair, thinking oh, no… what am I going to do now? I didn’t have any real skills. I had created a life dependent on sharing my thoughts daily. I talked about pop culture for 15 years! And suddenly, I was in a weird place of questioning what’s next. What would the next chapter of my life be like?”

As Steve contemplated his next steps, he felt like “fate was guiding me into a new project.” His network of radio hosts included Jeff Dauler, host of The Upside podcast.

“I thought about my buddy, Jeff, who was also let go from his radio job six months earlier. Jeff and his wife Callie had started their podcast, and I remembered watching his audience migrate from the radio over to their podcast. I texted him before I made the announcement about being let go and suggested we catch up. I wanted to talk about podcasting and see if it might be something that would work for me.”

Steve and Jeff brainstormed ideas for Steve’s podcast, including taking a “personal inventory.”

“I’m not an expert in anything,” Steve reflects. “I don’t have a skill or a hobby. I can’t talk about The Bachelor—there’s already 50,000 podcasts doing that. I can’t talk about sports. I don’t know anything. I kept asking myself what is different about me. And I specifically remember sitting at my kitchen table when the epiphany came—I could do a podcast with my mom!”

Steve has always had a close relationship with his mom, Nancy. During Steve’s divorce process, Nancy sent him a daily inspirational quote for upliftment, and he would in turn post those quotes on his social media.

Nancy, grounded in spirituality, is a deacon in the Episcopal Church near Atlanta. Steve believed she would have universal appeal with his audience.

“Now the problem was that my mom had no background in broadcasting. She had no public speaking skills. She had no microphone or any idea how to do a show or podcast. So when I called her in late January, I was like, ‘Mom, go with me here. If I wanted to start a podcast with you, would you be interested in doing it?’”

Nancy’s reply? “Yes! What does that mean?”

“I had retired, and COVID-19 was spreading,” Nancy says. “So I had lots of time. I figured why not learn something new that allowed me to spend more time with my son?”

And that’s how Certified Mama’s Boy was born.

Within one month, Steve and Nancy went from zero to launching the podcast. Nancy laughingly says she “managed to learn new technology with a lot of frustration from Kramer! 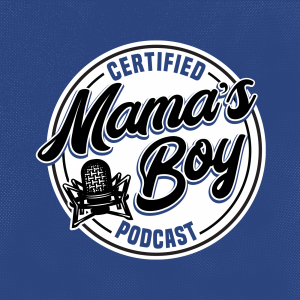 “There was lots of facetiming. ‘Mom, let me see your screen. Okay, plug this in here. Plug this in there. Hit this, hit that.’ There was frustration for sure, but we made it,” Nancy says.

And while Steve was modeling his friend Jeff’s podcasting strategy, “I wasn’t really ready to invest, because I wasn’t sure the podcast was going to work,” he says. “So I decided to go bare bones. I already had a Yeti microphone, and my mom borrowed a microphone from one of her friends for the first two months. The first episodes were done over Skype. We quickly learned that it was not a lasting solution. Then when we heard about Zencaster, and we decided to hop on there. We were trying to figure it out as we went along. Even Jeff wasn’t quite sure how to sync up two people who live across the country and make that work. Initially, it was really a mess. The first 20 episodes were for sure!”

Undeterred, mom and son persisted, and now, they are over 200 episodes strong. They record five days a week and have started a Facebook group. Certified Mama’s Boy quickly gained popularity. In fact, it’s landed the #2 spot on Podcast Magazine’s Hot 50 list for seven consecutive months!

“What we have now—the daily show—wasn’t necessarily the plan, per se. It became a lifesaver for me, as did my audience. In those dark moments, having an audience come to listen five days a week kept me on my mental game. It was such a blessing; it continues to be such a blessing. We have built a community. And I’m so appreciative of every single person in it from all over the country. They’ve either found me from radio shows, or from other podcasts, or through social media. There’s even a woman in the Netherlands who just happened to see a post of mine on Instagram and sought out the podcast from there. We’ve just become this really cool community. I didn’t know I could do that.”

Originally, Steve’s plan was to have his mother provide a quote and be on air for no more than two minutes. Slowly, however, Steve realized that Nancy had become a full-fledged co-host. Nancy remembers:

“Steve said, ‘Just have a quote ready every day.’ Oh, okay, I thought. That’s easy enough. I can bring a quote. Well, it became a little more than that. We share our lives with people. And whatever is happening in the moment, that’s what we talk about. Because that’s what life is—it’s lived in the present. And it’s been a lot of fun. Steve has the gift of gab, so I never know from one minute to the next what’s coming up.”

Steve’s father and sister have also been podcast guests and have special episode topics, as well.

“I think many podcasters don’t realize that their audience is genuinely invested in their life,” Steve says. “They want to know more. They want to get a peek at what’s really going on behind the scenes. I’ve shared my life for 15 years, so some people are pretty invested with what’s going on with me already. I brought my dramatic sister Maggie on the show, and listeners kept asking for more stories about her upcoming wedding, so we kept bringing her back on. And then my dad, nicknamed Jimmy Mack, came on to talk about totally random stuff, like getting screwed over by the phone company—old man stuff. The audience loved it, so I turned that into a segment called ‘What would Jimmy Mack do?’ If people feel like they’re getting screwed over, they can write in, and my dad will give them that ‘old man advice’ for ‘getting back at the man.’

“I think as podcasters, we have to remember that we are living in a time when people have a desire to feel connected to others. And by letting them in, we’re inviting them to grow attached to us, and vice versa.”

In September, Steve was hired by a Baltimore radio station to host the Kramer and Jess morning show. In order to capitalize on Steve’s existing fans, the station simultaneously launched a podcast, Kramer and Jess Uncensored on Radio.com. That show has been voted #3 on the Podcast Magazine Hot 50 list for three months in a row, as well.

Authenticity and warmth are hallmarks of the Certified Mama’s Boy podcast, which goes hand in hand with the following inspiration they wanted to share with our readers:

“Always look on the bright side, no matter how dark times seem. There’s always good in everything—you just have to look for it.” – Nancy

“When I thought my life had collapsed, I experienced the ‘dark night of the soul.’ I went through some of the worst things within just two years. I thought my radio job was the last thing I had that felt normal. When that was gone, I was so completely lost. And this podcast has been the bright side of my new life. I think it’s a testament to the medium, and I hope to use my show as a method for telling my story to anybody who feels like they don’t see hope for tomorrow. They don’t see where the next step is going to be. I didn’t know where my life was going to take me. And I’ve wanted to share my message that no matter what, you have to keep going. Mine has been an interesting journey, but I’ve made it with my mom’s positivity and support.” – Steve