But what makes a story funny? Or, better yet, ‘story worthy’?

Christine Blackburn, the host and producer of Story Worthy, knows. She has produced over 700 episodes of the podcast and had countless conversations with comedians and personalities around the world, from Kevin Nealon to Larry King.

“What makes a good story is change,” answered Christine in a recent interview with Podcast Magazine®. “When something happens, that is what makes a good story. It’s not demonstrative, like, ‘Oh yeah, I went to the store today.’ It’s more than that: ‘I went to the store because I was out of toilet paper. And then, this cashier offered to give me her toilet paper. It was the sweetest moment in the world. And that’s how I got toilet paper.’”

The majority of Christine’s guests are comedians, but she does make exceptions. “I like people who understand brevity and can tell a story in a concise way,” she added. “People who come on my show may share a tragic story, but they are not going to tell it in a slow and sad way. It’s more of a quick conversation between two comedians just hanging out.

“I think you can tell a lot about people by the story they choose to share,” Christine continued. “Most people have five to ten good stories in them… so why did they choose the one they did, specifically?”

Many times, true stories are much more hilarious than those fabricated. With literally hundreds of episodes to choose from, Story Worthy offers a number of funny tales.

“If you think of any famous comedian, you probably know his or her story,” Christine reflected. “You could probably explain who the person is, because s/he comes from a truthful place. That’s one of the things I love about Story Worthy. When you ask people to bring a true story to the table, they’re probably going to bring a good one.”

Christine also reflected on the accomplishment of passing the 700-episode mark. “I’ve never missed a week. In fact, back in 2014, I set a goal of doing two shows a week for five months. What I didn’t realize is that I was asking for another hour of people’s time. So, people ended up choosing one of the two to watch, and I didn’t really grow the audience. The downloads didn’t really change. This strategy didn’t pay off, so I went back to doing one show a week. 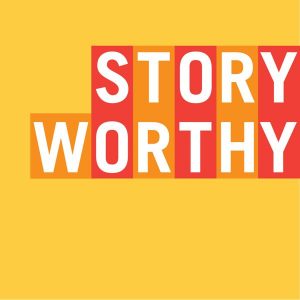 “Podcasting is an art. There’s no right or wrong. Do what you want to do, whether that’s podcasting from the basement, bedroom, closet, or studio. It doesn’t matter. But what does matter are your expectations. What do you want to do? Do you want to grow an audience? If you do, remember that you are asking for somebody’s time. Some people haven’t even gotten through Ozark yet! So, an hour is a lot,” Christine said smiling.

Although there hasn’t been a new episode of Ozark—Christine’s favorite Netflix show—in well over a year, she is excited about the upcoming new season. She is also enthusiastic about the future of her podcast and the podcasting industry as a whole.

“We’re still in the infancy stage. There’s so much room to grow! We’re only going up. The whole podcasting industry is so exciting. You have to hang onto your hat, because while podcasting has gotten a lot better, it’s also become very corporate. It’s very hard for indie podcasters, like myself, to stay relevant. Where I used to get 60,000 downloads an episode, I now get 5,000. That’s a big drop! It’s hard, because all the stars have come into the space now. So when Conan O’Brien comes into picture, what do I do? Dax Shepard, Katie Couric, all these people come in with existing massive audiences. That’s why I don’t do this for the money. It has to be the art first. You have to love it. Story Worthy is always in my world, and I DO absolutely love it! That’s the most important thing. I’m super happy about the show. I love talking to all sorts of people.”

Christine has certainly grown the show—publicists continually reach out to her. And with over a decade of podcasting under her belt, she has earned the right to be selective and chooses her guests wisely. Some of the request for appearances are funny stories in and of themselves.

“I have one right now! This guy keeps hounding me to put on his ‘mind-healer expert’ who has discovered the fifth dimension,” she explained in a very animated and humorous manner, complete with hand gestures and a funny face. “I’m like, ‘Dude, that’s so far out of my wheelhouse.’ I don’t find that particular topic interesting.”

Comedy is definitely in her wheelhouse, however. “I interview comedians because they entertain me,” Christine admitted.

In fact, it was a comedian who sparked her interest in creating what eventually became Story Worthy. “I was a huge fan of Adam Carolla,” Christine reminisced. “He was on a radio station out here in LA. Then, the format of the station changed to Latin music, or salsa, or something… and everybody lost their job at the same time. Nobody saw it coming. Every show, including Adam Carolla’s, gone. It was a big deal. That was 2009, I think.

“And then, Adam got a podcast. Boom! That was eye-opening to me. I understood why it was successful,” Christine said with enthusiasm. It also piqued her interest, and she began listening to other podcasts.

Her other major influence was The Moth. “I was going to The Moth, a storytelling show out of New York, a lot. It’s been around a long time, and now, there are Moths in all different cities. It’s a nonprofit where people tell true stories,” detailed Christine.

She also explained how her experience at The Moth was inspiring but also irritating. “People would tell a five-minute story, and then they were gone. That was so frustrating, because I always had questions. ‘Wait, wait, wait! I have a question over here!’” she mimicked.

“I’d chase them to their cars, going ‘Excuse me! What happened next?!’” Christine yelled, re-enacting her parking lot chase.

Fortunately, nothing negative resulted from Christine’s pursual of the storytellers. But she did subsequently win at The Moth three times for her own storytelling skills.

The concepts of The Moth and The Adam Carolla Show collided in her mind, and the seed for Story Worthy was planted. Apparently, that seed sprouted during a conversation in Big Bear, CA:

“I was up in Big Bear with my ex-husband. One day at breakfast, I said, ‘Here’s what I’m going to do—I’m going to start a podcast and interview comedians. They’re going to tell me true stories, and the stories will be the names of the episodes.’”

Sometimes, stating a plan out loud to another person, or even yourself, is the very impetus needed to put that plan in motion. Such was the case here, and having that accountability led to over 700 episodes. Christine also credits her ex-husband with developing the name, Story Worthy.

The most important question for this veteran podcaster at this stage may very well be “What are you going to do for episode 1,000?”

“Maybe I’ll try to get Adam Carolla back,” Christine answered without hesitation.

After a bit of contemplation, she added, “I’ll look for the biggest people I can find. There are still several comedians I would really like to have on.”

So, if you’re a comedian who not only stars in some of the biggest movies and arenas, but who also loves to tell stories, go ahead and put in your request to be in the spotlight for Christine’s 1,000th episode of Story Worthy now. It’s a good bet that the podcast will be around well beyond that, too.