“Welcome, friend. Have a seat by the fire. Make yourself… comfortable.”

The sound of a crackling fire. The yellow and orange lights flickering over the faces of your companions sitting across from you. The scent of wood smoke, roasting marshmallows, and damp, decaying leaves. The squeak of an animal scurrying through the undergrowth.

And, of course, the pièce de ré·sis·tance: a chilling ghost story to give you just a bit of a scare before you turn in for the night.

Welcome to Campfire Radio Theater, a horror audio drama podcast that harkens back to the days of summer camp, when swapping ghost stories over a late-night fire was a rite of passage.

“I’ve had people compare it to sort of a cross between Tales From the Crypt and The Twilight Zone,” said John Ballentine, creator of the podcast.

Campfire Radio Theater is an anthology of self-contained 30-minutes stories (rarely do they carry over to the next episode). It’s very similar to a traditional radio drama with a full cast of voice actors and a variety of sound effects. Ballentine emphasizes, however, that it does have a more modern spin to it as it is in stereo—better to listen to with a good set of headphones.

“We try and create something that sounds pretty slick and professional as much as we can,” he said.

“The sound design is there to paint a picture that’s kind of gory, yes,” said Ballentine. “But my focus is more on the story that will creep into your brain and maybe scare you without all the blood or guts.”

Ballentine’s love of radio drama started early. In the 80s, he used to listen to it on NPR. “It was like old-time radio,” he said. “Like the movie soundtrack with the projector bulb turned off.” 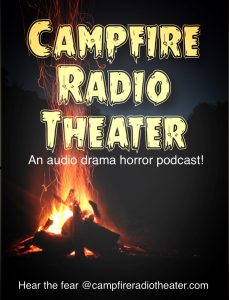 Some of his favorites back then were Star Wars radio dramas, Hitchhiker’s Guild to the Galaxy from the BBC, and a radio drama series called Nightfall, which was produced by CBC Radio and ended up being his “primary inspiration.”

Ballentine had always wanted to do a radio drama like Nightfall, but for years, he wasn’t sure if it was even possible. “I wondered, does anyone even listen to radio anymore? But then, when podcasting started to come around, I thought maybe there was a possibility there.”

Ballentine started Campfire Radio Theater in 2011. With a background in analog radio, he described modern digital production completely differently: “Now, you can sit at the computer and do all of this so easily.”

In addition, he also liked writing stories, so rather than letting them collect dust on his shelf, he created the podcast as an avenue to combine his love of storytelling with his audio background.

He produced the first two episodes without even having his own feed. But a friend of his, who had a feed showcasing other audio dramas, liked what he heard, consequently publishing Campfire Radio Theater.

Eventually, the podcast grew, and Ballentine got his own feed. He remains the main storyteller and audio designer.

“While we do pull a lot of sound from sound libraries, a lot of this is just me sitting with a digital recorder trying to figure out if I can make a twig snap sound like a bomb crack, or digging around in a can of dog food sound like an alien autopsy. It’s playing around with a lot of different sounds trying to create something that often resembles something that has no bearing to what the sound actually is. You want to create a sound that sounds like what folks think it sounds like. That’s a lot of fun.”

His quest for crafting the perfect sound has led to all sorts of adventures, including recording an entire podcast out in the woods.

That particular episode, titled Hungry Hollow, is about a witch who seduces a group of guys on a camping trip. As he didn’t want to ask a girl to come with them, he had one of the guys play her character and dubbed in her voice later, which ended up working “better than you might expect.”

Currently, Ballentine gets inspiration from other horror audio dramas such as Knifepoint Horror and Video Palace. And his love of “listening to movies with the projector light turned off” continues with The Soundtrack Show podcast.

Campfire Radio Theater is completely non-profit (no ads, no Patreon account, no merchandizing), so there is no set schedule for new episodes. You can find it on Apple Podcasts, Stitcher, and other podcast apps.