In his book, The Life of Reason, philosopher George Santayana wrote, “Those who cannot remember the past are condemned to repeat it.”

The history of the mafia in the United States is complex. Some accounts of it, via movies, books, and even documentaries, have been accused of “glorifying” the mob.

If the goal of the viewer, reader, or, in our case, listener, is to learn about the complexities of that history, learning about (not celebrating) the who, what, why, where, and how of the mafia can be quite intriguing and interesting, whether from the perspective of law enforcement or that of a mobster himself.

For Celia Aniskovich, the New York-based director and host, writer, and producer of the podcast Mafia Tapes, it was the latter. Her program dives into the story of the DeMeo Crew and their associate Dominick Montiglio. The eight-part series recounts much of Dominick’s life, the majority of which comes straight from his own mouth… including from discussions Celia had with him herself during interviews just before he died.

Podcast Magazine® recently had a chance to talk with Celia about her experience in not only producing a documentary about a member of the mafia, but in having one-on-one interactions with him.

The first, and possibly most obvious, question is, “Why?” What was her motivation to tell this particular story?

“I have to be honest—originally, I was not motivated,” laughed Celia. “I heard about Dominick’s story and thought, ‘I don’t want to tell another mafia story.’”

Celia is no stranger to true-crime and mob stories. She was involved in the highly popular Netflix documentaries titled Fear City: New York vs The Mafia as well as How to Fix a Drug Scandal, to name a couple.

So, she was very aware of the occasional glorification of, and granting of celebrity status to, some mobsters. “I have been sort of disheartened by a lot of the mafia stories out there,” Celia admitted. “Even some of the great movies. There’s sort of a glamorization that happens. As someone who’s done a lot of work in the true-crime space, I’m very careful about not glamorizing crime and criminals.” 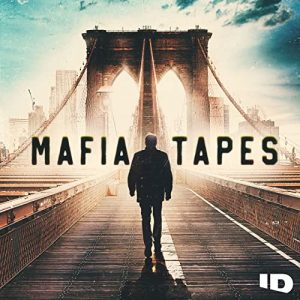 Celia made it clear that the mafia doesn’t get a pass for hurting and killing people because “there’s a code” or some type of “false honor” in what they do/did. “I wanted to be sure that the story I was going to tell would be different.”

Indeed, Mafia Tapes IS different. The podcast certainly covers the facts without glorification… or judgement, for that matter. It also utilizes different angles—many of which you won’t see in most movies, even those based on true stories. Mafia Tapes details Dominick’s relationships, including with his family members, and how they were affected by “mafia life.” It also provides perspectives from family members of those killed by the mafia, some of whom were killed accidentally or mistakenly. While the mafia may have thought of it as “collateral damage,” the tragedy was real for those families.

Celia spoke specifically to that aspect of Mafia Tapes. “Our team consisted mostly of women. That was really important to me, because I wanted to focus on victims. I wanted to hear from family members of mobsters—kids, spouses, friends… people you don’t normally hear from. I wanted to make sure that it was honest and unique, not just another ‘old mob’ story.”

As the name of the podcast implies, the genesis of this documentary came from a series of old recordings. “I became really excited when I got to hear the tapes that Dominick’s friend, Ross Brodar, gave me,” Celia admitted. “That was really kind of the jumping-off point for me. Listening to them gave me an overwhelming feeling that there was something missing to the story, and that set me on a path of figuring out what it was. I also wanted to give a voice back to those people.”

“I like to tell people, ‘Listen to Mafia Tapes even if you’re not a mafia fan,’” Celia said. “There’s a lot more to this story. It is much more about being a human being than the mafia.”

There’s a lot to unwrap in those eight episodes, for sure. Listeners will definitely get more out of this podcast than most TV documentaries on the mob. Simply put, it digs into more—and deeper—aspects of the story. It also captures the ripple effect of negativity that even one mafia-based action has on families and relationships.

To dig that deeply into how numerous lives were affected can have an effect on those doing the digging. “It was both difficult and very simple at the same time,” Celia quipped. “The simplicity comes from the fact that we share the reality that we are all the sum of our choices. Lives are the sum of the choices we make and those we don’t. That’s something we talked a lot about in Mafia Tapes, including Dominick’s.”

Some of the difficulty was not as one might think—re., the psychological effects. Rather, it was around surface-level obstacles common to creating this type of documentary. “Not everyone would talk to me,” Celia smiled. “I wasn’t surprised, but I needed to be sure that I was telling the story as truthfully as I could.

“It was also difficult to balance the different interpretations of the story. Dominick himself said that the people who knew him the last twenty years of his life would likely declare, ‘I love that guy!’ But if you knew him earlier in his life, like his daughter, who grew up with him, maybe not so much. Dominick was a lot of things to a lot of people. So, trying to parse who this person really was wasn’t easy. It’s why I wanted to get Dominick’s perspective as much as possible, for the universality of the story.”

Hearing from Dominick’s daughter, Camarie Montiglio, is one of the highlights of the podcast. It’s not often you hear about the aftermath the child of a mobster is subjected to in his or her life. “So much of the story is also about the intergenerational nature of mafia stories and family,” Celia pointed out. “It was important to me to hear from the kids… from the perspective of a child, in addition to that of the father’s.”

There were certainly a number of layers to Dominick other than being a father, and one might imagine it would be at least a little uneasy to be in the same room as a mobster. “Certainly, visiting Dominick was nerve-racking,” Celia laughed. “It’s documented in one of our episodes. It’s a little bit of a peek behind the curtain of what we do and how we do it that I wanted to incorporate into the series. It is the reality of our job.”

Clearly, this wasn’t Celia’s first rodeo, per se, and she reflected on that for a bit. “Maybe this is overly optimistic. Maybe this is naive. If you’re my mother, maybe it’s just reckless. But I believe that most people are good, and I mostly trust others. I also trust my gut. I had to put myself in a lot of unique and potentially dangerous situations over the course of my career, but I think if you approach people with humanity and respect, they tend to give that back to you. I try to approach people in that way. So, did I show up to Dominick’s house and see a gun on the table and get a little worried? Yes! I wasn’t supposed to know where Dominick lived, but thanks to a crazy series of events that you’ll hear all about on the podcast, I ended up having to find out.”

Gladly, Celia came out of that meeting not only unscathed, but also with an additional valuable perspective most listeners will enjoy. Having examined Dominick’s life so closely, what does Celia think of the man himself?

“I met Dominick at the very end of his life, when he was a shell of his former self. He wasn’t well. He had a hard time remembering things. There even are things I chose to exclude from the podcast that, journalistically, I could have put in, but I knew that he was misremembering. I knew he just wasn’t making sense of what had actually happened. As a journalist, my responsibility is to be able to step back from personal opinion and allow others to share their stories. I also think I did not know Dominick well enough to have a personal opinion. I learned so much about him from his friends and family, but I don’t feel that it’s my place to have an opinion.”

In the end, Dominick Montiglio was a lot of things, and Celia does an admirable job of poignantly and philosophically sharing his life story.

“Dominick is a good reminder to me that there is always something in your life to be proud of and something to be ashamed of. You hope to wake up every day and do more of the things to be proud of. Dominick was a flawed human being, just like the rest of us.”

As a podcast listener, whether you are interested in hearing about a unique and complex life or some intriguing aspects of mob history, Mafia Tapes is worth your time. It’s not a glorification, but a very interesting and introspective account of the sum of Dominick’s choices.