“This is Stella Thomas. She doesn’t know it yet, but she is about to discover that nothing she has ever known was real. What will become of her in a cold, uncaring universe? Apparently, it involves pistachios, arson, and a horse.”

So what do you do when you’re about to graduate from college and start your brand-new life in a career you’ve dreamed about since you were a child… except suddenly, the entire industry implodes in a manner no one could have possibly seen coming?

Well, if you’re Alex Kingsley, you pivot and create podcasts, instead. Specifically, an audio drama podcast called The Stench of Adventure.

“The Stench of Adventure is a sci-fi comedy,” said Kingsley, who writes, directs, sound edits, scores, and voices one of the minor characters. “It follows the adventures of Stella Thomas, who is a human who only recently found out that the entire Earth was a simulation. The other humans are dead, so she is the only human left. She has to figure out what life means now that nothing she ever defined herself by matters anymore. And she kind of finds herself in this existential haze swept up by a con woman who gets her to work on an intergalactic garbage-collection ship. The show is about Stella’s growth and the relationship between her and this completely alien crew.” 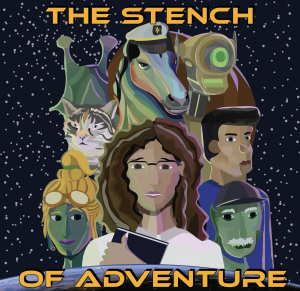 The inspiration for The Stench of Adventure came from a playwriting seminar Kingsley took with the playwriter Adriano Shaplin. “The prompt was to write a scene that is both a comedy and tragedy. And this is where my mind went. Oddly enough, when I turned in the scene, he said, ‘Okay, this is good. This is a comedy. This is not a tragedy. This made us laugh, but it’s not a tragedy.’ And I was like, ‘Okay, challenge accepted. Let me take this and expand it into something that is both.’ It is kind of ironic that it sounds like a tragic concept. And yet somehow, I succeeded in the comedic but not the tragic, with that first attempt. Still, I like to think that it uses a sense of existential dread and meaninglessness. It’s not, ‘Oh, God, what is life all about?’ But more of a, ‘We don’t know, so it doesn’t matter.’ And that’s very liberating.

“It was just this one scene for years. And then, the pandemic happened.”

When the pandemic first erupted in 2020, Kingsley and Grace Griego, who produces The Stench of Adventure and is the lead actress, were theater majors about to graduate and start their careers. Instead, as theaters across the world shut down, they found themselves no longer able to do the thing they went to school for.

“I was kind of burned into my own existential crisis. Grace and I were both kind of in this place of questioning—what does our art mean now? What can we do right now that is at all helpful or useful, when we can’t do what we’ve studied and now just feels obsolete? I became really interested in the idea of audio drama. And I got back into fiction podcasts, starting every day of my quarantine by listening to podcast after podcast after podcast. It not only became a comfort, but also a huge inspiration. I also was lucky enough to get hired to voice act on a fantasy podcast coming out shortly called Whisperling. I got to work really closely with that crew, and they talked to me a lot about the process. I was like, ‘Oh, I could do this! This is a way that I can reinvent what I do.’ And I had this idea that I put away years ago that was so exciting to me. I decided to pull that back out, and then, I wrote to Grace, asking if she wanted to do the show with me. Grace is the best person in the world, and she said ‘yes.’”

Griego’s role, along with voicing Stella, is coordinating with the really big cast. “This was definitely the most difficult part of the process, because we were managing three different time zones, which was my job as producer. I had to find times that worked in Pacific Standard Time, Eastern Standard Time, and also in Spain.”

They recorded it using a program called Zencastr, which allows everyone to record at the same time in real time.

Production has begun for season two of The Stench of Adventure, and additional fiction podcasts are in the works, as well.

UTR: The Mindfulness and Grief Podcast