When I was seven years old, I was reading books, playing outside, and watching cartoons. But I wasn’t living in a global shutdown due to a pandemic, and the Internet didn’t exist.

Thanks to modern technology, children today have incredible opportunities to connect and share their gifts.

While living in the UK, seven-year-old Siyona was introduced to children’s podcasts. In the fall of 2019, she told her mother she wanted to create one for children. Siyona remembers:

“I felt it would be more enjoyable listening to another child rather than an adult. But the tricky part was deciding what I would talk about. I figured out that there were science and story podcasts, but there weren’t any that actually discussed reality—like news about things that matter to kids. I decided to podcast about news and other topics that interest me and possibly interview other kids.”

“I was a bit taken aback, but I knew she was capable of doing it. Plus, there is a lot of bickering that goes on at home with a really talkative child like Siyona—her nickname at school was ‘chatterbox’! So I loved the idea of her channeling her energy more usefully and helping other kids, as well. I began learning everything I could about podcasting, including the editing. I wanted to help her achieve what she wanted.”

In line with Siyona’s initial plan for an interview-style podcast, she named her show Little Mind Chats. She soon changed her mind, though, because she felt that “no difference will be made in the world if only children speak. But we are aiming the topics at an audience of children. Children know what other children are thinking, but they don’t know what adults are thinking. So, by interviewing adults, I thought it would be more helpful.”

While Siyona was ready to launch her podcast at the beginning of 2020, the family was busy relocating from the UK to Bangalore, India. Siyona was excited to be moving to a new country and eager for all the adventures she was going to have. But before she could begin those adventures, the entire country of India went into lockdown in March of 2020. Siyona says:

“It felt a bit weird, because I was hoping to come to India to have lots of adventures. That’s what my family had always told me… India is one place where you have lots and lots of adventures! And because of Coronavirus, we sadly couldn’t go on any.”

Not only that, but Siyona had also been excited about attending a new school. “I thought wow, school is going to be so exciting! I’m going to make so many friends!” 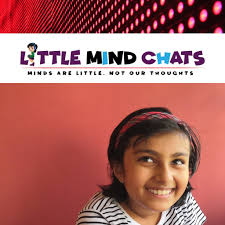 Siyona talked candidly about her feelings around lockdown:

“I was excited about everything. I was going to wear the school uniform and eat ‘mouthwatering’ lunches! But with Coronavirus, we really couldn’t do much about going to school. And I couldn’t make friends. I don’t know when they’ll ever open school back up, but I’m getting quite bored at home. Because of the shortened learning periods, we aren’t getting through many things in class. So there’s more homework to do. We have lots of down time, which is another reason I wanted to start my podcast—I was concerned about what other children were doing during all this time.”

This empathy was partly due to Siyona’s own situation—because of the time difference, she isn’t often able to connect with her friends back in the UK. She has made friends with some children in her neighborhood, but she hasn’t been able to “play” with them. So she knows how it feels to miss being able to connect with other kids. Fortunately, Siyona has a three-and-a-half-year-old brother to play with (he has even spoken on her podcast!).

Siyona says the upside of the lockdown was that she “found peace and quiet” to start Little Mind Chats, which she launched on April 24, 2020.

Inspired by world news events and children’s news programs like BBC’s Newsround, Siyona takes news-related notes and then shares them on her podcast.

In fact, she and her mother “curate the news together.” One of the many benefits of this partnership is that mother and daughter are developing a great relationship while working together. Gita openly shares her feelings about her daughter:

“When I was working, I questioned if I was doing enough for my children. I was actually wondering if I could help Siyona reach for more… beyond what she was doing at school. When she was a toddler, I nurtured her love of learning with flashcards and things like that. At three years old, she was already so bright—she was familiar with the 90 countries of the world and could point them out on the world map.

“So I was feeling a bit guilty that I might not be nurturing her talents as much as I wanted to when she began thinking about podcasting. After I quit my job in December 2019, I got completely behind helping her realize her podcasting dream. Since then, it has been magical! It has also made both of us very organized. And she feels happy knowing that I’m here to support her.”

Siyona’s classmates and friends are also supportive of her podcasting endeavor—she has even mentioned some of her teachers in her episodes.

Originally, Siyona was dropping her episodes every Sunday, but she has since changed to Saturday releases. “We were like, if we take all the stress on the weekdays, and then release episodes on Saturdays, then we’d have the whole weekend off.”

Another topic important to Siyona is health. In fact, the first season of her podcast is devoted to it. She interviewed a dentist, an eye doctor, and a psychiatrist—all three of whom discussed health in a mentally digestible way for children to easily understand. Those episodes have resulted in young listeners sending messages to Siyona about their plans to take better care of their teeth and eat more vegetables.

In some ways, Siyona is a typical nine-year-old girl. She loves gardening and reading and has pet fish. During our interview, she even took a break to enjoy a swing while I chatted with Gita.

Unlike other children her age, though, this young podcast host has also written six chapters of her first book! She has a collection of poetry she has written, as well.

“The kind of poems I write aren’t just one genre,” Siyona explains. “I wrote a poem about a river on New Year’s. I write because I want to write. I also don’t want to lose the thoughts. When I was younger, I used to do the same thing, but orally. I would make up a song on the spot… but now, they’re all literally lost. The only one we still remember is about rainbows.”

“I am certainly passionate about environmental news. Because I care for the world and the home we live in.

“For example, I came across an invention of solar cells that can be printed with an inkjet. The solar cell is a matchbox-sized device that converts wasted electricity into electricity that can be reused again, so there will be no wasted heat at homes and offices. How cool would that be??”

“We have to think about these kinds of things. I mean, would you like it if ants invaded your house and started to eat up the walls and roof, and all the rainwater would just come in? You would not feel like being there. And that is exactly what we are doing to our planet.

“If we want to give Gen Z and Gen Alpha a better planet to live on, we must start now.”