Like any comic book hero origin story, Shane “Hurricane Helms”—considered by many as “the funniest man in pro wrestling”—has hit all the marks to become a superhero inside and outside of the ring.

Born and raised in Smithfield, North Carolina, Shane’s “first memory of wrestling is watching it with my dad,” he mused. From there, he began his journey to WWE stardom by refereeing at a local promotion to help pay for his training. At the age of sixteen, he caught his first break and match when a talent didn’t show up. Little did he know that almost a decade later, he would take the world by storm… or rather, hurricane.

In the meantime, he underwent various “reincarnations,” from boy-band parody heartthrob to a championship resume that even Clark Kent would envy.

Helms began wrestling in WCW—World Champion Wrestling—in 1999. He earned individual titles as a solo competitor, but was equally impressive in tag team competition. “I was a part of a lot of big events, and pretty well-known as the last guy to beat The Rock,” Shane proudly reminisced.

He is also the longest-reigning WWE Cruiserweight Champion to date, having held the title for 385 days. Despite his many accolades, “It’s the little moments in your career that you remember most,” Shane said.

From 1991 to date, Shane has competed in over a thousand matches inside and outside of WWE. He has faced off with The Undertaker, whom he speaks very highly of: “Any time he talks, you listen, and you learn.” The list of formidable opponents continues with the likes of Christian, The Rock, Diamond Dallas Page, the “Insane Clown Posse,” The Hardy Boyz, Raven, etc.

Outside of the WWE, Helms has realized a great deal of success within other televised wrestling companies and independents spanning from the United States to the United Kingdom—from Manchester to Dublin, Scotland and back. He has traveled and performed in various independent wrestling companies such as Chikara Pro (founded by Mike Quackenbush) and Combat Zone Wrestling, among others. The buck does not stop there, though. The superhero has taken his powers overseas to the United Kingdom. 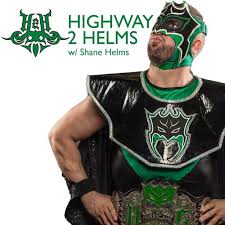 From 2015 to 2017, Shane spent time within IMPACT. He also made a guest appearance as the loveable superhero in the “Final Deletion” match created by The Hardy Boyz in 2018. In the same year, he feuded with the up-and-coming star, “The Villain” Marty Scurll for Ring of Honor, fully capitalizing on the “Hero vs Villain” vendetta we all know and love.

After almost thirty years of wrestling success, Helms has hung up the cape and boots… but his for the sport remains. Far from stepping away, Shane became a backstage producer after an awe-inspiring return to the “Royal Rumble.” “There are a lot more opportunities for guys after their pro careers,” he shared.

Like podcasting, for example. In 2010, Helms created Highway to Helms to cover… well, anything he wanted, really! The show had a stint within the “ITunes Top 10” podcasts before Helms suffered injuries from a motorcycle accident, necessitating a break from the world of podcasting. Joining the team behind the Keepin It 100 with Konnan podcast, he was inspired to bring Highway to Helms back. Discussing a wide variety of topics—from travel stories to pop culture to current events and anything else he enjoys—the show’s 4.7-star Apple rating speaks to his ability to entertain, with or without his cape.

Danny Peña, OG: On Bill Gates, the Evolution of Gamertag Radio, and the Key to Podcasting Success