Imagine… you’re a college student gamer, and Bill Gates asks YOU to play one of his games. How do you top that??

You become one of the first-ever video game podcast hosts, naturally!

That’s just what OG (Original Gamer) Danny Peña, host of the award-winning podcast Gamertag Radio did. He comes together with co-hosts Peter Toleda and Parris Lilly to deliver their twice weekly podcast filled with news, reviews, exclusive interviews, and roundtable discussions about the gaming and entertainment industry. And let me tell you, the combination is magical, disturbing, and fun all at the same time! (Yes, they are that good together!)

Celebrating 15 years of podcasting success, as well as the publishing of their 1000th episode with the interview of Phil Spector of Xbox in February, Gamertag Radio has had a big year. 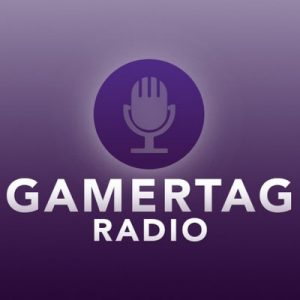 The history and evolution of the show is as much a part of Danny as breathing. His dad was a DJ in the 70’s and 80’s at the heyday of disco and party music. Danny loved playing with the equipment, and at the age of five, started making his “own” tapes and recording music. He played “talk show” with his brothers… or any family member he could bribe into listening.

Fast forward to the early 90’s, and you’d find Danny DJing, spinning hip hop for house and warehouse parties. He would also take over his friends’ pirate radio stations, which were of course illegal (and plentiful in Miami) at the time, because they weren’t FCC approved. But that didn’t stop him—he still continued to broadcast as often as he could.

As his love of music grew, so also began his love of video games. His grandmother gifted him his first Atari 2600, and later, he acquired a Sega Dreamcast. He played the games over a dial-up 56K modem (think: verrrryyyyy slowwww connection). He also listened to an online radio station called 88 Hip Hop, which ended up being one of the main inspirations for his own internet radio show. While the show did not go very far in the traditional sense because of a lack of equipment, it did foreshadow his future.

In addition to playing the games, he started interviewing his friends about the games, usually recording over a cassette player. He edited his own tapes using the play… record… pause… play method. Even as a teenager, he started honing his skills and “ear” for editing.

Danny’s move to New York in 2001 to attend college proved to be a game changer. As video consoles rolled out to a new generation of players, the marketing of the consoles and games was ramped up to even greater heights. Launches were EVENTS, and spectacles and invitations were hard to come by.

Taking advantage of proximity, he cajoled a press pass from the promoter of the launch at Microsoft and gained VIP access to the backstage area. He was able to interview some of the pioneers of the industry on his cassette recorder. Shortly after, he received a pre-launch Microsoft Xbox—one of 10—and was invited back to give Bill Gates, CEO of Microsoft, feedback on the gaming system.

In 2005, Gamertag Radio was officially launched to the public, on a computer, since podcasts were very new to the game and smartphones had not debuted yet. Listening to a podcast then took effort, but slowly, Gamertag Radio gained a following. “The key,” says Danny, “was (and still is) to be seen and to be present. We got out of the house. We attended events. We showed up—not just physically, but mentally as well.”

One of those first events he attended was E3 in Los Angeles. “I had $20 in my pocket to feed myself and my brother for a week. We ate dollar hamburgers at McDonalds all week. We were so excited! We burned through all our money-making media kits and CD’s of our broadcasts. We handed them out to anyone who would take them. Then… nothing. No one called! No one even paid any attention.” That is, until iTunes added podcasts to their platform two months later.

Danny believes it’s important for podcasters to know the history of the industry. Today, a podcast can literally be started in a matter of minutes with a smartphone. Technology exists to broadcast that recording around the world for a relatively small investment of time and money. Manually customizing your own RSS feed is unheard of anymore, much less the starting and stopping of a cassette recorder to edit, as Danny had done.

For Danny, Peter, and Parris, the magic to their success and their longevity is in their community—one that was built over time and with earned trust. They listen to their audience and involve them in the show. They participate in MeetUps, host live events, and they take their audience with them to Hall of Fame induction award shows. “Too many people are focused on downloads. If you take care of your listeners and include them in your journey, the downloads will come,” says Danny. That is the underlying philosophy guiding the show and their own journeys.

“We create amazing content for our listeners, and we stay true to our beliefs for our audience. They know when the energy is not there. I still feel the same about our show as I did when I was a kid in my 20’s. The day I stop having fun is the day I stop!” Danny exclaims.

One of the highlights of the incredible journey of Gamertag Radio and for the trio, Peter, Parris, and Danny, was Danny’s induction into the Podcast Hall of Fame in 2015 as the first Latino inductee.

Parlaying their podcast into helping the community—raising money and awareness for charities and other community outreaches—Danny even took Unity, a gaming company, to the Dominican Republic last year to lead a workshop for Latino gaming developers to teach them how to be a part of the gaming community. “There is so much opportunity for Latinos in the gaming industry,” Danny says. “Each just needs to be made aware of the other.”

“Be yourself, have fun, and gain trust. You never know who is listening.”