Most podcasters create the podcast they need for themselves—and yes, self-administered audio therapy was a motivator for the hilarious brothers who created My Brother, My Brother and Me. Their shared goal? To continue spending quality time cracking jokes with each other after all moving away to different cities 10 years ago.

“It came out of a having an excuse to talk to each other once a week,” said Travis McElroy, who, together with brothers Justin and Griffith, created the weekly comedy advice podcast to answer questions submitted by listeners or found in Yahoo! Answers. They also feature “guestperts” like Jimmy Buffett, Elizabeth Gilbert, Lin-Manuel Miranda, Al Roker, Dan Savage, and others.

Recently celebrating their 500th episode, the McElroy’s grew up in a “radio family” with dad Clint encouraging the boys’ impersonations, comedic one-upmanship, and skits, sometimes even putting them on air at his Huntingdon, West Virginia radio station.

“That’s literally the entire reason we’re doing what we’re doing, which is both a compliment and a critique,” laughed Justin. “We grew up in a world where it normal to record yourself talking, making jokes, doing skits, and presenting them for people. We had no inhibitions.”

Travis added, “We just grew up connecting through humor, performance, and doing theater together. Dad would act and direct, and we were in shows together. We just got used to the performing part.”

The wildly popular improvisational show, known to many as MBMBaM, has often topped the podcast charts with the McElroys’ wild, comic tangents and wealth of inside jokes. In fact, it has evolved into a small media empire. 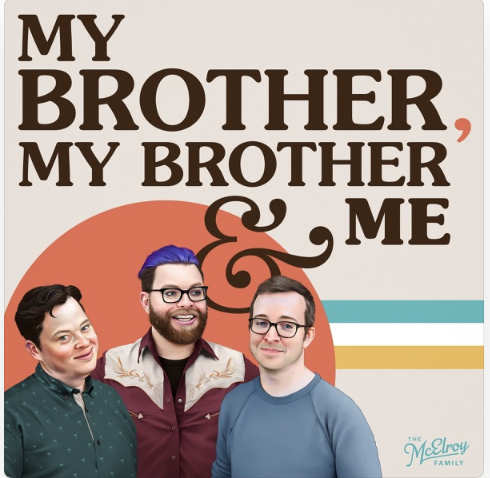 Take the episode in which Justin took some time off from the show to care for his newborn, and he, Travis, and Griffin got together with dad Clint to play Dungeons & Dragons. The episode was so popular, it spun out into a biweekly comedy adventure podcast, The Adventure Zone, on Maximum Fun Network. Featuring the family solving puzzles, fighting enemies, and leveling up their characters in a series of cinematic and humorous encounters, this hilarious show morphed into two-time a New York Times bestselling graphic novel series. The Adventure Zone: Balance gets a home on NBC’s Peacock streaming service this summer as a side-splitting fantasy animated series that follows an unlikely, poorly equipped trio and their beleaguered Dungeon Master as they reluctantly embark on a quest to save their world. And the third book in the series, The Adventure Zone: Petals to the Metal debuts July 14.

All this thanks to dad Clint’s 60-year passion for comic book collection. “And so, I forced my love of comics onto my children by barraging them with comics,” Clint said.

The brothers also found a way to use their podcast to troll themselves into being cast in their favorite film franchise, the upcoming Trolls World Tour—the sequel to 2016’s Trolls, starring Justin Timberlake and Anna Kendrick. In it, they play characters called Techno Beat Drop Button, Country Music Tear, and Hard Rock Tear.

Back in 2017, the McElroy brothers, inspired by Justin’s three-year-old daughter (well, in addition to the “legal edibles” in play), recorded a pilot for what would become a long-term project, a joke-y-but-sort-of-serious podcast all about getting themselves cast in Trolls World Tour and documenting their progress.

“My sister-in-law, Riley, told me that there were YouTube stars who had done cameos in the first Trolls movie,” said Justin. “And as these edibles took effect, it started to occur to us that if they let YouTube people do it, they might let podcasters in, too … if we worked really hard at it.”

Wait! What? “You guys ingested edibles?” father Clint deadpans. “Ugh. All right, after this interview, we’re having a talk.”

Phase two of their mission to “impress their kids,” they say, is to not be cut from the film. As Travis put it, “We’re set to be in Trolls 2—if we don’t f*ck it up.”

“If we are cut from the film, we need a f*cking riot,” Justin chimed in. “It needs to be the biggest deal on Earth!”

The McElroys are part of a growing trend of major media and Hollywood trolling popular podcasts for new content.

Yet, they say their ambitions to grow their multimedia empire is somewhat like riding a roller coaster. “Melinda, this is not an exaggeration. The Universe is both trying to lift us up and keep us in our lane simultaneously,” Justin said.

To illustrate Justin’s point, in 2016, the brothers did a show on NBC’s Seeso, and “they were like, ‘Season 2, let’s do it!’ They shut down the next day,” Justin explained.

Next came the global pandemic the very moment Trolls World Tour was set to make its debut, and all the theaters shut down. And, the very week they were to appear on The Tonight Show, it too was cancelled because of the Coronavirus.

“Every step forward we take, the world tries to stop us and tamp us back down,” Justin mused.

Coronavirus has also impacted My Brother, My Brother and Me, as the brothers face a new challenge: how to be funny during a global Pandemic, and when it’s appropriate and acceptable. Justin’s take: “If you’re too afraid to make jokes about it, it gets scarier, but you don’t want to be insensitive to people who are facing financial ruin or who lost a family member.”

All of a sudden, the types of listener questions they riff off of changed: “We’re getting a lot of ‘I haven’t been outside in weeks,’ ‘I’ve lost my job,’ and ‘How do I work from home?” Travis explained.

At first, the brothers wondered how to deal with it. Griffin added, “We’re all fairly anxious people, so not letting that paralyze us … it’s another thing we struggle with.” But then the realization came: they were true experts at the ‘stay-at-home’ gig, having always recorded from home. “This is our territory. This is our moment to help people. Like, yeah, you shouldn’t wear sweatpants all the time. You’ll get sleepy and won’t do good work.’ This, we can talk about,” Justin joked.

The tightknit McElroy family says the toughest thing about Coronavirus has been not being able to see each other.

They also miss the live shows they started recording a year into MBMBaM. “It’s a nice reminder that you’re not doing it in a vacuum,” said Justin. “The longer we go without doing a live show, the more it starts to feel like, I don’t know, ‘shouting into the void’ is probably too strong. It just starts to feel emptier.”

All the same, the brothers’ improvised antics are proving a panacea and welcome distraction: “People reach out to us to talk about how much they appreciate the release,” said Travis.

Now, the brothers have gotten married and have families of their own.

Other than family, “giving forward” is the most important thing to the McElroys, who have raised hundreds-of-thousands of dollars for their Huntington, WV hometown. “We’re blessed to have listeners who are incredibly generous,” said Justin. “They formed a group called My Brother, My Brother and Me Angels, and they often fill the list of all our asks to help the homeless and kids who won’t have Christmas presents. They’re always asking, ‘Is there anything more we can do?’”

The brothers say they are eager to hit the road and get their live shows going again. “It’s so good to see people laugh face-to-face.”

And, to see their father in person on Father’s Day.

Wondering how to celebrate yours?

Danny Peña, OG: On Bill Gates, the Evolution of Gamertag Radio, and the Key to Podcasting Success