The Evangelical church is losing people—especially millennials—in droves. Horrified by the trend, some Christian leaders wonder how to draw them back. Melvin Benson is one of them, but he’s not waiting for millennials to just show up at church again.

Instead, he is taking the message to them, wherever they hang out… including in the world of horror films.

“The backhand that Christianity sometimes has toward horror movies misses out on a lot,” says Benson, lead host of the Cinematic Doctrine podcast. “A lot of children’s stories are even based on instilling healthy forms of fear.”

Horror movies captivate Benson because of their implicit message about the value of human life. If the viewer does not care about the characters, the ‘spell’ breaks, and the movie is dull. But in a good film, “You want to see them succeed in a way that is very different from a romantic comedy.” Benson uses the shared value of human life as a springboard into deeper conversations.

At a glance, he seems like a “typical millennial.” His long, red hipster beard and blonde hair might make your mind go straight to coffee shop axe throwing and wannabe machismo. But no! Benson is a true geek in the coolest way possible.

Growing up in suburban Philadelphia, his childhood included neither the outdoor play of the country nor the bustling life of the city, but of ample time playing video games. “Growing up, I was usually playing at a computer screen or having friends over to play games,” he mused.

Benson recognizes that his experience is unique to his generation and not necessarily understood by older age brackets.

For instance, other generations typically met spouses in person at school or a local bar. Benson met his wife playing a zombie-killing video game. They had similar avatars in the virtual lobby, and she friended him because he didn’t make a big deal about her being a girl. The shared experience in the game allowed them to become friends first. “I talked about a lot of things with my wife before we ever met,” he stressed.

No wonder Benson believes in the ability to connect through media! He wishes the organized church would understand how effective it can be.

“There are people like me in the church who the church isn’t talking to,” Benson opined. It is personal for him, having experienced his childhood church congregation shrinking to the point of having to merge with another to survive. Benson blames a reluctance to engage his generation.

“All I ever wanted was community in the church,” he reflected. “And it begs the question, what else is the church perhaps ignoring and not paying attention to?”

This could very well explain why millennials are leaving organized religion so rapidly. 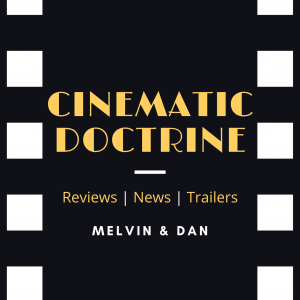 For his part, Benson hopes to reach his peers by “creating a bridge to others by being interested in the same things.” Specifically, movies. His podcast, Cinematic Doctrine, seeks to connect a Christian worldview with film culture. In this way, the cultural phenomenon of something like a big Marvel movie release becomes the building blocks for meaningful conversation about the nature of life. He hopes Christians enjoy it, and that they learn to have better conversations about movies.

Why movies? There are two reasons.

First, Benson loves them. “Movies are the only art medium I can think of that can be bad but still give me a great experience,” he explained. While most people turn off a dull movie—or leave the theater—Benson enjoys them. He wants to discern what the director was trying to do and appreciates even a failed effort.

Second, Benson believes they matter because they capture people’s imaginations. “People are always watching movies,” he justified. Therefore, the attention movies receive make them a perfect bridge for cultural conversation. Benson addresses moral issues that Christians would traditionally use to critique films. At the same time, he points out positive portrayals of Biblical ideas.

His goal with Cinematic Doctrine? “I hope it helps Christians become a bit more versed in film culture,” he said.

All societies pass on their values, morals, traditions, and more through stories. At one time, they were passed around the campfire as nomadic peoples stared at the stars. Now, they are moving pictures that cost a fortune to make. The medium has changed, but the essential function has not.

If Christians abandon art forms like cinema, they cannot and should not complain when it abandons them.

Intrepid new media innovators like Melvin Benson are making sure the message of the church outlives traditional forms of communication. With a little luck, he will reach an entire skeptical generation.

Callie and Jeff Dauler: Finding the Positive in Daily Experiences