There are times in all our lives when chaos and turbulent waters seem to be at the center of everything we do. These moments may feel hopeless and dark, and sometimes, there seems to be no end in sight. Luckily, though, there is almost always a light that eventually breaks through.

Callie and Jeff Dauler underwent their own turbulent journey, emerging on the other side of their battles with a positive result—The Upside podcast.

Jeff is a comedian who was also an on-air radio personality and executive producer for 25 years. Callie has worked in the music and talent industry for 10 years. They initially met on Twitter. Callie was a fan of Jeff’s radio show, and they were both working for the Recording Academy (local Grammy office). Jeff recounts Callie sending him a message saying, “Hey, I feel like we should know each other because we know so many of the same people.” They became friends, and months later, after meeting in person, they became a couple.

After four years of dating, Jeff and Callie got married in 2016. Their wedding on November 2 made the Atlanta news, because Jeff surprised Callie with shelter puppies to help with wedding day stress. As a result, most of the puppies were adopted.

In January 2019, Callie and Jeff suffered a miscarriage, and Callie bravely shared their painful experience on her blog. In May 2019, Jeff was fired from his radio show. Despite their heartbreak and tribulations, Callie and Jeff practiced daily gratitude as they tried to figure out their next steps.

Callie recalls telling Jeff, “We should do something together—maybe our own show, taking what you know from radio and ‘marrying’ it into a daily podcast.” For two months, the couple brainstormed their concept and what they wanted to offer their listeners, who included their combined followers/fans from the radio show, social media, and blog.

The most difficult part of their decision to begin their podcast was deciding on a name. They knew they wanted to create a brand that was authentic to them, both as individuals and as a couple.

Callie remembers, “We were looking for one or two words—nothing complicated—that would help encapsulate our message: we want people to be good in every situation, even when it’s hard and very, very real. We started writing down words and spent a super-long time looking up adjectives for ‘positivity’ and things like that in the thesaurus. I came across ‘upside’ and blurted out, ‘What about The Upside?’ And it just clicked.’”

Jeff also recalls, “The ‘positive, gratitude, affirmation’ space in podcasting is definitely crowded. Gratitude is the core of who we are. But we didn’t want to lean on that, because it’s bigger than just being grateful. It’s literally finding the upside. When Callie said it, I was like, ‘Wait, say that again!’ And then she did, and I knew that was it.”

Two months later, on August 8, 2019, The Upside podcast launched and had 800 subscribers within the first three days. Due to the podcast’s popularity, Callie and Jeff decided to make it a 30-minute daily show. At the Podcast Movement event, Jeff was asked how he was able to podcast daily. “I explained that, for 25 years, I did a five-hour show every single day. So to me, the podcasting process is much more streamlined. A daily show is a challenge, but it’s not difficult.” 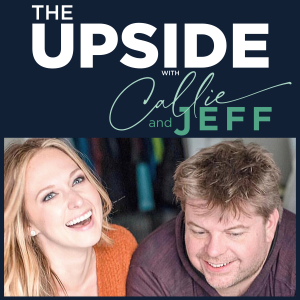 In comparison to radio, Jeff says, “I 1,000% enjoy podcasting. Absolutely. After 25 years, I bought into radio. In order to be successful, you have to beat someone; you have to be the number one person in your market. With podcasting, though, the entire world is your potential audience. So I don’t have to be better than anyone else to also be successful. And I think the more people who are putting out quality content in podcasting, the better it is for all of us, which is really, really refreshing, because I like that cooperation. It’s very invigorating to not have to interrupt a great story to play a stupid Chainsmokers song.”

Because The Upside is a daily show, Callie and Jeff are able to share their lives as they unfold. They both have been diagnosed with anxiety disorders and share their experiences openly. Callie explains, “Anxiety is such a beast. It’s becoming more and more common for people to talk about it as they feel comfortable. We want to make people feel a little less alone by talking about things that people are scared to talk about, but are quite honestly very normal. Anxiety is so normal. Jeff and I both struggle with it. We combat it every day in different ways. Jeff has systems and activities he uses to help him cope with it, like cooking. I take medication for it as well as practice yoga. Honestly, authenticity is so powerful, and I think people are so drawn to it because they want to know they’re not alone.

“We get to say, ‘Hey, I have anxiety, and I really struggle with it. It’s super hard for me, and I feel really vulnerable right now.’ I was amazed at the response we received from people saying, ‘Oh my gosh, I thought it was just me.’ It makes you feel less naked and alone when other people relate to you with their stories. And that’s a dialogue that we love to open up, because that’s exactly what we want to help people with—to feel less alone.”

2020 has been a wonderful year for Callie and Jeff. They recently moved into a house they (and their dogs) love, their Facebook following has grown from a community to a family of nearly 16,000 engaged followers, and they are expecting a baby girl in November!

“Our Facebook community really is like a big family,” Callie said. “We even have house rules, like you have to be kind and supportive to each other. Nobody’s perfect, but we make it a safe space and we make sure that everybody is being respectful. It’s a place on the internet where you can go knowing you won’t be judged or humiliated or yelled at. It can be an escape for people, and we’re really proud of that. I think we’ve been able to cultivate a group of people who want to be better tomorrow than they are today. And that’s really the only common thread that I think most of our listeners have.”

This summer, Callie and Jeff learned about an eight-year-old child named Austin in their local community who is terminally ill. Austin had three things on his bucket list: going to the Georgia Aquarium and Wild Animal Safari, and spending the night at Great Wolf Lodge. Jeff and Callie created a fundraising campaign called “The Summer of Austin,” and The Upside family’s incredibly generous donations allowed Callie and Jeff to fulfill Austin’s bucket list as well as pay the family’s rent for six months, pay off one of their car loans, provide a monthly stipend to the family for bills, and more.

It is no surprise that The Upside podcast has been voted by fans as Podcast Magazine’s number one podcast on the Hot 50 list for four months in a row, while securing a spot on the list for eight months in a row.

Callie and Jeff’s combined journey through the “dark night of the soul” brought them both to their purpose of “living in gratitude, finding the positive in every experience, and encouraging others to do the same.”