Sandy Marshall and Nate DuFort, co-creators of Reach: A Space Podcast for Kids, are showing the world’s next generation of scientists, thinkers, and dreamers that the sky really is the limit.

Nate is a veteran of the comedy world, but the time came when he wanted to move beyond live entertainment. He and Sandy started producing comedy podcasts, and Nate found himself contemplating the possibilities of storytelling.

His daughter unwittingly channeled his creativity in a clear direction by one day announcing, “Dad, I want to do Bloody Mary in the mirror.”

“It made me think about the importance of kids understanding the significance of the brain science behind fear and the history, even the power dynamics, behind myths and urban legends like those that spring from colonialism and White male domination, and why they’re perpetuated. And so, the show Unspookable was born almost three years ago.

“With the success of that podcast, we started looking at the resources we had and relationships I had from working in comedy. Eventually, the idea for Reach: A Space Podcast for Kids emerged.

“My long-time sketch comedy and improvisational comedy collaborator, Sandy Marshall, was a Solar System Ambassador for NASA’s Jet Propulsion Laboratory, which meant he had access to professionals working in the field of space exploration.”

Sandy and Nate decided to create a show that would be full of the hope and wonder they experienced themselves while learning about the American Space Shuttle Program as children.

Nate recalled, “In school, they used to wheel in a television on an old squeaky cart so we could watch shuttle launches, but for millennials, and even my 11-year-old daughter, those launches just didn’t exist. The excitement around the space program in her early childhood was non-existent.”

However, with a new Rover and a helicopter going to Mars, the excitement is building once again. “We realized that we could use the same lens we use with Unspookable to look at space exploration while talking about social issues that are important to younger generations.

“On the show, the hosts don’t only talk to the designers of space-related devices; they also meet some of the people who may be the next astronauts to set foot on the moon. For the next mission, we’re going to have not only the first woman on the moon, but also the first person of color.

“We also delve into topics that aren’t discussed in school, like the ethics of space exploration—the issues with space junk and debris that Americans are incredibly guilty of leaving out there. Additionally, we look at what NASA is doing to study and help reverse climate change by providing data internationally and by working with other global space agencies. 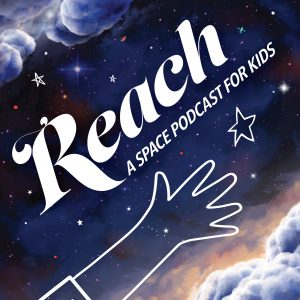 “We hear about the Elon Musks of the world and the bigger, stronger, faster side of space exploration, yet it’s just as important to be talking about conservation on Earth and what space-related science can do to help us save the planet we’re already on. When we get to the moon, are we going to replicate the same broken societal norms that we have here on Earth? We found that Generation Z and Generation Alpha are really excited about these topics.”

Like these generations, the Reach team analyzes the reality beyond the hype. Nate shared an idea for a future episode: “When it comes to space travel, if you’re not an astronaut or wealthy, a space flight isn’t in your immediate future.

“We know that it’s a big dose of medicine,” Nate admitted, “so we like to add a little sugar to the mix.” Thus, he and Sandy have created a review-style format for the show, which includes a 10-12-minute interview with an expert and a comedy bit.

“That’s how we started taking advantage of our relationships in the comedy world,” Nate explained.

“Reach has featured surprise guests such as Tawny Newsome, a friend from the Second City Comedy Theater here in Chicago, who has had major space/sci-fi roles, including Netflix’s Space Force. Even Alex Goldman from the much-talked-about show Reply All did a comedic routine on our podcast and showed that he is a talented voice in any context.

“We’re also grateful to have had Jack McBrayer, the voice of Fix-It Felix from Wreck-It Ralph, Rachel Dratch, and Lord of the Rings’ Sean Astin. From the Kids Listen community, we’ve had podcasters like Dania Ramos from Timestorm, Dan Saks from Noodle Loaf, and Eric O’Keefe from What If World.”

Each episode feels like a thrilling journey, thanks to married hosts Brian Holden and Meredith Stepien.

“They are part of a theater collective called Team Starkid that found fame online. As program facilitators at the Adler Planetarium here in Chicago, the way they talked to the children was electric. It really stuck with me, so we reached out to them.”

Adler Planetarium is among the partners who lend their expertise to the show. Others include NASA and Cosmosphere – International SciEd Center & Space Museum. The show’s interactive at-home experiments are one of the outcomes of these partnerships.

“We are hyper-aware that we are adults talking to kids, so we hope the fun, interesting facts and children’s voices lure in kids who aren’t instantly passionate about this type of content. I love to hear from them, because they make me think differently about what we’re doing. For example, my daughter is not particularly interested in space travel, but she and her friends are really interested in animal preservation. A conversation with this group of 11- and 12-year-olds was the impetus for an amazing discussion with the Canadian Space Agency about how they’re using satellite data to save a species of whales, and the feedback from that episode has been amazing.”

Ever attentive to audience feedback, Nate said, “We’re going to introduce a wider variety of segments and at-home activities, as well as serialized content with space-related cliffhangers.”

Reach: A Space Podcast for Kids is blasting off to new heights, and everyone is welcome to come along for the ride.

UTR: Thespis In the Green Room: A Podcast

UTR: A Kids Book About: The Podcast