“You can’t wait until life isn’t hard anymore before you decide to be happy.”

You may have heard these inspiring words spoken by 30-year-old Jane Marczweski, who goes by the stage name Nightbirde, during her America’s Got Talent audition that aired last month. Her original song, “It’s OK,” won Simon Cowell’s Golden Buzzer, and the audition video now has over 120 MILLION views on Facebook alone.

At the time of her audition, Nightbirde shared that she had cancer in her lungs, spine, and liver and had been given a two percent chance of survival.

“But two percent is not zero percent,” she said. “It’s important that everyone knows I’m so much more than the bad things that happened to me.”

And so much more, she is.

Her positive outlook and attitude are lessons in survival at a time when we need it most. She is a beacon of light and hope for people currently finding themselves in dark places.

While the song’s lyrics provide a glimpse into Nightbirde’s cancer diagnosis, divorce, cross-country moves, and feelings, there is so much more to her story. Beyond the details of the cancer and what happened, there are the tools that she has used to get through it all.

Nightbirde pointed to one of those tools on her Instagram page a few weeks before AGT aired, sharing a clip from a podcast series she participated in with “the therapist [discipleship counselor] who saved my life with the truth.” That podcast is R.E.S.T. with Virginia Dixon, and Nightbirde was featured in the four-part segment titled “How You Love & Attachment.”

“It’s the realest I’ve ever been about the collapse of my marriage and the lies that were keeping me sick,” Nightbirde said.

As explained on her website, “After years of working in the field of neuroscience [and] collaborating with medical practitioners… Virginia Dixon observed that it is through the pursuit of relational, emotional, and spiritual truth (R.E.S.T.™) that we most effectively reconcile conflicts and displace the confusion, chaos, and dis-ease which frequently lead to illness.”

To achieve the R.E.S.T.™ necessary for healing, it is essential to examine the life of your heart, the role of your relationships, the meaning behind the pictures of your life, and the intrinsic value of your story—in other words, the good, the bad, and everything between.

Each of us has a “story”: the sum total of what we’ve experienced and inherited from our ancestors. R.E.S.T.™ involves knowing, understanding, and ultimately reconciling our stories to end negative generational patterns and bring about healing.

Dis-ease will become disease if left unresolved. But if looked at as an opportunity to understand things you didn’t know existed (attachment styles, triggering events, relationships), you can understand how you love, and you can heal and prevent all kinds of disease.

Virginia employs an integrated, comprehensive approach to reconciling the “confusion, chaos, and dis-ease” that compounds when spiritual, emotional, and relational conflicts are not resolved.

R.E.S.T.™ is the fruit of 40+ years of Virginia’s life’s work, and she now leads a six-week online course called 40 Days of R.E.S.T.™ every 60 days throughout the year to help people live with increasing measures of freedom by displacing the confusion, chaos, and dis-ease that plagues them.

Born in Montevideo, Uruguay, into an eclectic family of deep political and philosophical convictions, Vi observed at an early age how people’s hopes, dreams, fears, and passions are often rooted in an inherent desire to reconcile generational conflicts. She intuitively recognized that confusion, chaos, and dis-ease were a part of life and had a profound understanding that, by nature, people long to be seen, heard, and understood.

She found that it is the lies people believe about themselves and the intentions of others that generate confusion, chaos, and dis-ease resulting in conflict, and she felt an innate compassion for people’s vulnerability and desire for peace and freedom.

“We need to be quiet and learn to listen to people, because their constitution by nature knows exactly what it needs, and when it needs it. And it knows what’s creating the confusion,” Virginia shared. 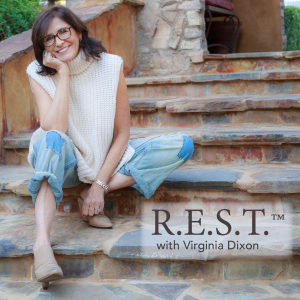 So, Virginia went on to study multiple disciplines in search of the truth: philosophy, theology, biology, chemistry, and law. Her findings?

“If we do not intentionally step into these places of R.E.S.T.™ to reconcile the disparity between our spirit, our soul, and our body, we are not going to work our way out of a paper bag,” she said. “There’s not a pill to fix this. There’s no MRI. There’s no blood test. You need to go into that quiet, still place and understand the constitution of the spiritual realm, the soul, and the brain, and how it processes information and sustains life.”

That’s really what R.E.S.T.™ is about—its deep roots are grounded in the history of Virginia’s family and woven into the anatomy of her ancestors.

R.E.S.T. with Virginia Dixon was launched in January 2021 to meet the needs of Virginia’s clients by allowing them to revisit the principles of R.E.S.T.™ covered during their time spent working together. It also serves as an introduction for new clients, providing a foundational understanding so they can hit the ground running at their first session.

Episodes 1-4 dive into understanding our constitution (spirit, soul, and body) and how it works to sustain or diminish the life of our heart, the role of relationships, the meaning of pictures, and the stories of our lives. This is imperative to displace the growing confusion, chaos, and dis-ease in order to heal and find significance in life.

Episodes 5-8 constitute the aforementioned four-part series telling Nightbirde’s story. Listening to these binge-worthy episodes, it is apparent why Nightbirde credits Virginia with saving her life with the truth: Relational, Emotional, and Spiritual Truth, that is. According to Virginia:

“Jane is a perfect, textbook example of the impact that unresolved emotional conflicts have in creating and advancing disease and what is possible when those conflicts are reconciled.”

In these episodes, we learn that cancer can be linked to certain traumas or relationships, depending on the context in which it developed and/or the triggering event that led to the disease.

From understanding the emotional constitution of cancer to how your “attachment style” may be connected to disease, these episodes provide fascinating information and discussion, all woven throughout Jane’s illuminating story of marriage, divorce, cancer, remission, return of cancer, and healing—and Virginia’s facilitation of the reconciliation process.

Listeners also meet podcast moderator Natalie Williams, a former client-turned-Virginia’s administrative assistant, in Episode 5. She immediately grasped the concept and value of R.E.S.T.™ and recognized how it could speak to the heart of her generation. She now handles the social media accounts for R.E.S.T. along with a host of other responsibilities.

Episodes 9-12 dive into the environment of our childhood and how it impacts our lives from birth to beyond. After that, another series of episodes with guest Katherine Dang covers things that hold us back, feelings of control (or lack thereof), power and weakness, and more.

The entire series is well laid-out and easy to follow, and it provides a wealth of information and clarity. It’s truly hard to stop listening once you get started.

An expert at understanding the human condition, Virginia’s belief that the heart is central to all things guides her philosophy on healing, allowing her to effectively understand and communicate the instrumental role that R.E.S.T.™ has upon each individual’s capacity to reconcile conflicts.

R.E.S.T.™ is really the story of every single person listening. We are a nation—a world—in a global state of dis-ease. Even beyond our political and economic situations, it’s woven into the anatomy of our souls.

Covid has ushered in an era of fear, but in Virginia’s world, it has also done a lot of good for humanity… because it’s waking us up.

“Covid to me is the beauty in the ashes of humanity, because it’s exposing so many facets of the human condition,” she said.

We can give it power and say it’s killing us, Virginia continued, but the real pandemic consists of the unresolved conflicts within the heart of man, which are driven by the “I wants, I needs, I deserves”—the lusts of the flesh. If we can get through those, we can thrive and shine despite a pandemic.

“We don’t chase a cure, because we all have an appointment with destiny,” Virginia explained.

Virginia firmly believes that, by design, individuals have a fundamental understanding of what is at the core of their conflicts and dis-ease. Convinced they possess both the power and authority to heal, she guides them through the process of reconciling the conversation between spirit, soul, and body. The therapeutic relationship is not the primary source of healing; the client is. Virginia merely facilitates the process.

“I’m just putting an oxygen mask on them and teaching them about the oxygen,” she said.

Virginia empowers people by providing a formula to reason through the complexities of the human experience. And by working with one patient, she creates a sort of “ripple effect” that extends to the healing of others.