Even before the murder of George Floyd by the now-convicted former Minneapolis Police Officer Derek Chauvin, Chris Sherwin continually observed the division between citizens and cops being created by false information.

The murder sparked something in him, and coupled with that aforementioned misinformation, the additional violence, destruction, and harm happening around the U.S. activated him. He found himself asking, “What can I do in my little corner of the world?”

“Somebody has to step up to the plate and say, ‘Look, let’s just step back and all take a seat at the table. Let’s break this thing down by going back to where people are wrong.’ Because wrong is wrong, and there are consequences for your behavior. No matter what side of the coin you’re on, or what side of division you’re on, you’ve got to accept that responsibility.”

As things continued burning down, people were getting hurt, policemen were getting shot at, and innocent people were killed. That’s when Chris knew he had to do something to illuminate the truth—like that of the Thin Blue Line:

“Everybody thinks that the Thin Blue Line signifies a code of silence, but it doesn’t mean that at all. It is the only line between peace and anarchy. And that’s what we stand for. It is the division between peace and chaos and anarchy. You see these false narratives go out while 99.999% of us are out there doing the job. Yet the people who get the recognition are the .03 who do something really stupid or, like in the case of Derek Chauvin, criminal.”

On the street, Chris saw the effects of that misinformation—it was becoming harder and harder to communicate with the public. There was also a lot going on that was not being released to the public. The Chauvin/Floyd case prompted Chris to draw the hard line in the sand and take action.

Chris met his co-hosts and friends of over 20 years Shaun Ferguson and Scott Thorsen when the three were hired out of the Academy. Even though their career paths took different tracks—one in canine, one in narcotics, and one who went on to be a SWAT officer, they stayed close.

So, as the events of the summer of 2020 unfolded and Chris identified a new calling—to find a way to build a bridge back to community—he considered alternatives to approaching traditional media, which had its own agenda about what and how much to expose. Knowing it wouldn’t help him meet his objective of bringing community and police back together, the podcasting idea hit him. Naturally, he reached out to Shaun and Scott to see if they’d be interested in joining him behind the mic. 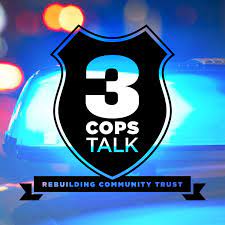 “They thought it was a great idea, and so far, hosting 3 Cops Talk – Rebuilding Community Trust with them has been awesome. It’s going to take a lot of work on both parts, because both sides have to admit that when you’re wrong, you’re wrong. Now, I’m not just talking about the Chauvin/Floyd case. I’m talking about how when a cop does something wrong, that information isn’t really released. And when the bad guy does something wrong, the whole truth isn’t getting out as to why it ended up in a fight or shootout. We just tell the truth. No matter if you’re the policeman or the ‘bad’ guy… the truth is the truth, and you have to be held accountable for your actions.”

Chris, Shaun, and Scott, all of whom are still active duty, would love to see the show expand to the national, and ultimately international, level. Episodes cover a wide variety of topics with a largely educational component, so people know what to do and expect, as well as what the cops expect. The hope is to help people realize that the majority of police out there are really there to save, protect, and serve their community. And when they talk to their communities, they largely hear that their presence is wanted.

One thing these three cops want to encourage their listeners to do is ask questions. They really enjoy receiving feedback and questions that help them produce even better content and facilitate that connection and bridge-building that is at the heart of their intention for the show.

“We got one email that said, ‘I thought driving was a right, not a privilege.’ I think by having a couple of guests on who did serve prison time for murder, drug dealing, and stuff like that, and by letting them tell their story and talk with us about how they turn their lives around, people get a different perspective. They’ve told us, ‘Hey, you guys come out hard.’ And then we explain how yes, we do at a traffic stop, and here’s why—that’s exactly where most coppers die… on a traffic stop within the first 30 seconds. You’ll notice that after about that first minute, as long as you’re okay, then we’re okay. And that guy who served 10 years for second-degree murder is like, ‘Holy cow.’”

In addition to inviting the community to call or write in to the show, the three guys also encourage listeners to realize there is a conversation to be had, and get connected locally—police and citizens talking together. They want their listeners to understand that you can have a conversation and disagree and still get along just fine. You can be Republican, you can be Democrat, you can be Black, you can be White, you can love the BeeGees, or you can hate the Beegees, and still get along just fine.

“I just want people to be able to sit around a table and talk… air their differences, and be okay with one another’s vision or style, even when it’s not their own. I don’t care who you are or where you come from—Shaun, Scott, and I will put our lives on the line for you every day. When we get a radio call, we don’t ask, ‘Who is the person? What color is their skin? What neighborhood did they live in? What’s their sexual orientation? What’s their religious beliefs?’ We go to the call, ‘Shots fired.’ When people are beating each other, we go to that call.”