At the end of 2019, creator of the Where the Stars Fell podcast Newton Schottelkotte (known as “Newt”), was a senior in high school and recently hospitalized and diagnosed with Type 1 diabetes.

“Even though I had already been diagnosed with autism,” Newt said, “finding out that the diabetes gene is on both sides of my family was a whole new ballgame.

“It’s more important than ever to tell the stories of those who are physically or mentally challenged, because as we’ve seen, we tend to get pushed to the margins.”

Newt, who plays Ed on the podcast, has been writing since the eighth grade. “I latched onto podcasts from an early age. Listening to a wide range of shows helped me not only figure out the kind of writer and creator I wanted to be, but also who I really am. I realized that I’m non-binary because of a show. I think it is incredible to know that today, we have access to media that helps us easily make these types of discoveries.”

In Newt’s freshman year of college, the Where the Stars Fell podcast started to take shape.

“In the fall of 2020, our school was barely doing any theater productions. And most of those produced during the pandemic were very low-key. The theater students were hungry for any kind of acting. I put up my casting call posters all over campus, and I got a lot of interest. I’m very lucky that I got some awesome actors who make my job both very easy as a writer and very hard as an editor. I’ve also been friends with my co-writer for many years. 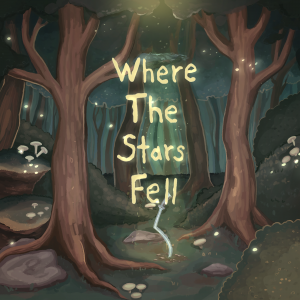 “The actor who plays Lucy is a STEM student. She had never done voice acting before. She came into the cast and was absolutely incredible. It just blows my mind every time I think of the amazing people I managed to find.”

Newt’s knack for finding a great cast started with their first podcast, Inkwyrm, which they created while still in high school.

“I got a couple of people from my school’s theater department and did some casting remotely. I also taught myself editing on Audacity and how to record on a variety of poor-quality microphones. On my 15th birthday, I released the original pilot, which I still maintain was the best birthday present ever.

“By the time we had recorded the first season, I realized that I had grown exponentially as a creator, and I could not stand to have the original pilot out there anymore. So, we redid the whole thing. The original is still there, though, because I think it’s good to have your baby steps out there for the world to see, to keep you humble.

“The only way you can put something cool out there is by accepting that it’s going to be rough around the edges, and you’re going to have to learn and grow. You just put it out there anyway.

“Throughout high school, we continued to produce episode after episode, and I ended up getting to work with creators I admire. I still have those wonderful friendships today.”

In college, Newt is studying audio production and marketing. “Most of the people in the Where the Stars Fell cast are really incredible theater actors from my college’s theater department who had never even considered being on a podcast before.”

Newt’s main claim to fame in the audio drama community is being a mostly self-taught sound designer, aside from information they gleaned from college classes.

Freelance work for Better Lemon Creative Audio, which produces podcasts for museums and non-profits, has given Newt a valuable jumpstart. “Doing consistent work in my field rocks, and the great thing about podcasting is that typically, you can work pretty much anywhere.”

Newt’s hard work on crafting the podcast has been paying off, because the show has a solid fanbase. “I have an entire wall in my apartment full of fan art.”

Newt appreciates every listener who has ever done a live tweet or thread while listening to an episode. “Fan engagement is one of the biggest things you can focus on to not only grow your show’s audience, but to also enrich the show. Many creators in audio drama don’t acknowledge their days as raving fans of other audio dramas, but I definitely do.

“One of the biggest influences on the show is Gravity Falls,” Newt recalled. “I grew up watching it and was super-involved in the fan community. The feeling from that show is what I tried to take into writing the mysteries of my podcast. Gravity Falls’ strategy of leaving breadcrumbs is something that I think some writers have forgotten. If the audience figures out the mystery before the end, that is a good thing. It means you did your job—you left all the right clues and gave them just enough information to get their creative juices flowing. At the end, they find out they were right the whole time. I want the audience to have just as much fun solving the mystery as they do with the rest of the show.

“Selling your audience on the mystery itself as well as the characters makes for the best, most believable mysteries. That makes it an engaging experience. I think that’s the reason we have amazing fans.”

With the attention to detail that goes into each episode of the Where the Stars Fell podcast, chances are, its popularity will continue to grow when Season 3 is released and beyond.