Monica D. Livingston, retired League All Star running back and Hall of Fame Offensive MVP with The DC Divas of the WFA, has spoken to tens of thousands of people all over the country. She has presented for national organizations such as the NBA, NFL, MLB, FedEx, YMCA, and the National Institutes of Health, as well as for international groups from Russia, Ghana, and Zambia.

Yet she never thought she would find herself in her current speaking or podcasting career.

Growing up in a “sports family,” Monica always wanted to be a professional basketball player. “My dad was a teacher and college football coach,” Monica said. “So, sports have always been a part of my life in some way.”

Monica was an All-County basketball player and played Division 1 college basketball at UMBC for a season before suffering an injury that ended that playing experience. But the next season, she enrolled in Washington Bible College to play basketball while still going full-time at UMBC. She had several scoring records at WBC, including most points scored in a game and season.

After graduating with a degree in Sports Management, Monica quickly discovered that said degree would really only lead her to work in local pro team ticket sales and the like. So, she decided to go into education, like her father, due to the connection between sports and education. Monica became a teacher, athletic director, and coach at a private Christian school. During that experience, she learned how to be a leader on and off the court. She recalled her first day teaching a Kindergarten class:

“Their parents were crying because it was the first day. The kids were crying because, well, they were in Kindergarten for the first time. Chaos was about to ensue. Panic was starting to set in… and then I remembered the advice my dad had given me the night before—to have them hold hands. So, I did, and somehow, they all settled in, and it worked out.”

Three years later, she was a supervisor for a before- and after-school care program for Fairfax County. “I was bored out of my mind and wanted something more challenging,” she said. As a result, she accepted a position as a crisis counselor at a special education school. During her time there, she learned a lot about helping others and recognized that type of service as her calling and mission.

What she never anticipated was how her career would lead her to play professional football. Monica’s colleague at the special education school asked her to play flag football on a highly competitive 11-on-11 league. Monica came to love the sport. The DC Divas, a local professional tackle football team for women, then recruited her to play, but she was apprehensive about the staying power of the league and the high probability of injury that could end her flag career. So, she initially declined.

But once she attended a game, she said she was hooked and wanted to be a part of the ground-breaking league. She secured a position… and she made her mark.

To offset the $1200 cost of playing in the league, Monica had to secure sponsorships for her team. That process taught her how to work with corporations and other companies by selling sponsorship packages. 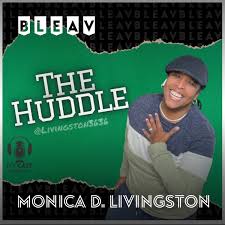 During that time, Monica and a Diva teammate decided to open a non-public, non-charter private school in Washington DC for 17 to 22-years-old young adults. 98 percent of the students had been incarcerated, Monica shared, and she credits the experience for teaching her how to become an entrepreneur. She went on to become the owner of lucrative CPR/First Aid training business, as well.

With her playing days behind her, the urge to stay involved with football remained, and now, Monica serves as the Women’s National Football Conference (WNFC) Chief Revenue Officer.

“This is the first women’s professional football league that has major sponsors, a business model strategy for longevity, successful apparel sales, C-Suite executives at the helm, international TV coverage, and clout,” Monica said of the WNFC, which is sponsored by Adidas, Riddell, Wilson, and Bose. “We have a 2.5 million follower reach on social media and are looking to help grow the league through our following. The challenge is converting those followers into a revenue stream,” she said. But Monica knows she’s up to it: “After we educate sponsors on the benefits of partnering with us, the checks come in. They want to be a part of the stories these women are telling on and off the field.”

Monica saw podcasting as a natural extension of her current career as a sought-after international speaker and culture coach. She named her show The Huddle because “My fondest memories took place in the huddle,” she said. “It’s where we athletes come to strategize, dialogue, regroup, and then, dominate.”

Monica does all her own bookings and records the podcast—which she says is all about her Living with Livingston principles: learn, laugh, love—using Zoom. It boils down to good dialogue and conversation, which she provides.

The Bleav Podcast Network edits, promotes, and hosts the show.

Monica says she has really enjoyed interviewing people and has learned so many things from her guests. She also enjoys connecting with them offline to collaborate. “It’s all about connecting with your guests and discovering their mission—something they really want to do.”

One of Monica’s favorite guests was Michael Oher, because she loved his story and how he gives back to the community.

Clearly, she is doing the same.

UTR: Across the Pond Sports Podcast