Maz Jobrani, Iranian-American comedian and actor, has transformed his passion into his legacy: using comedy to address prejudice and stereotypes around the world while educating on a variety of topics.

He has appeared in numerous comedy specials on Comedy Central, Showtime, and Netflix and in several films and shows, including Better Off Ted and Superior Donuts. He is the author of I’m Not a Terrorist but I’ve Played One on TV and a TEDx speaker.

Jobrani was also a founding member of the ‘Axis of Evil.’ No… not that axis of evil. Rather, it’s a comedy group with top stand-up comics of Middle Eastern descent Ahmed Ahmed and Aron Kader and special guest Dean Obeidallah. As described by Letterboxd, Axis of Evil “[took] it upon [itself] to single-handedly bridge the gap with an original comedy tour that has become one of the hottest tickets in the country… a sold-out, no-holds-barred event that has made headlines everywhere from CNN to Newsweek.”

Jobrani’s family immigrated to the Unites States from Iran in the late 70s, when Jobrani was six years old. Even at such a young age, he loved comedy and aspired to be like Eddie Murphy—much to his parents’ dismay. They had different expectations for their son, persistently encouraging him to become a lawyer or doctor.

“It became this battle that went on for years,” Jobrani said. “I would tell them, ‘But I want to be on stage.’ They would say, ‘Well, become a lawyer, and then on weekends, you can go be on stage.’”

However, Jobrani wasn’t on board with this plan. He decided he’d rather be a professor, but ultimately changed his mind and dropped out of graduate school.

“It wasn’t until I was in my mid-twenties that I finally realized that you only live once, so you’ve got to do what you love. I was lucky enough to know my passion.”

At 26, Jobrani decided to go all in: he enrolled in comedy classes with the dream of being an actor.

“My mom was worried—she was very worried. I remember her saying, “You didn’t become a lawyer. You didn’t become a professor. At least become a mechanic.’ I said, ‘Mom, how did you go from lawyer to mechanic? There’s a bunch of jobs in between.’ And she said, ‘Listen… everybody needs a mechanic. Nobody needs an actor.’ I was like, ‘You know what? You’re kind of right!’ My mom is funny.”

Clearly, she passed her sense of humor down to her son. Jobrani is especially gifted at leveraging his heritage in his comedy. In a growing cancel-culture society, one might wonder how he is able to do so in such a widely appealing way:

“I never try to punch down—only up. I try to make fun of people in power. I try to do self-deprecating jokes. But I never make fun of anybody for their personal attributes, or anything like that. Plus, with the world we live in, you do have to be considerate of the way you say things. You just have to be a little more thoughtful about how you express yourself.

“It’s also about storytelling. Let’s say you did something unique, like climb Mount Fuji. The key is painting the picture. You have to bring your listeners with you on that journey, so they’re experiencing it, too. They’re going, ‘Oh my God, this is crazy!’ as they make the climb with you. That’s all storytelling.”

This focus on storytelling is part of what makes Jobrani a gifted podcaster, as well.

When his ten-year-old son asked him a question he didn’t know the answer to, Jobrani had an idea—rather than go to Google, he’d launch a podcast to bring professors, experts, and successful people from all walks of life on to educate him and his audience on a plethora of subjects, from God to fashion to Russian politics and more. And of course, Jobrani and his team add the comedic element to ensure the lessons are funny.

So began the Back to School with Maz Jobrani podcast, co-hosted by Tehran and Kaitlin, launched in late 2019. 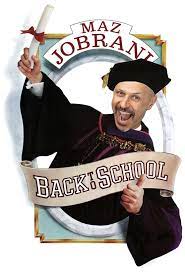 When the pandemic hit a short time later, Jobrani viewed switching to Zoom interviews as a “silver lining”:

“Having done morning radio and press as a comedian for the past 20-something years, I was always comfortable behind a mic. So I was comfortable doing other people’s podcasts, and I was comfortable doing mine. I was just getting used to talking to guests and laughing in a room when everything locked down. Zoom turned out great, though, because if we wanted a guest who was on the east coast, we no longer had to wait for him or her to be in Los Angeles to come to the studio.”

It also gave him a “live” audience aspect, which, as a stand-up comedian, he loved:

“Once we figured out the formula,” Jobrani said, “which was unmuting 10-20 audience members, telling them not to have barking dogs or crying babies nearby, and asking them to be the voice of the audience, we were dialed in. So if there was a joke one of them liked, we wanted her to let us hear her laughter, which would help other people laugh. And the real beauty of it was that I could then go into the gallery, where there were say 100 people I could interact with. Let’s say I saw someone texting on his phone. I’d be like, ‘Hey John, what are you doing?’ And boom—I could do immediate crowd work with that person. Everyone else could see John, too, which is a lot of fun. So we were able to see the ‘glass half full’ of it all.”

Boasting a 4.7-star rating on Apple, Jobrani said Back to School has “become an excuse to talk to interesting people… and there are a lot of them out there. I want people to hear their stories and hopefully leave the conversation with a little more knowledge about the subject than when they first started.”

It’s safe to say he’s accomplishing his mission. Jobrani already had a built-in fan base, and his live standup provides him with a solid, free advertising opportunity—recently, at the Houston Improv, he invited his live audience of about 1500 to check out his podcast, and his number of listeners continues to grow.

He has also used social audio to grow his fanbase, hosting rooms on Clubhouse with nearly 6,000 people in attendance.

“I loved the sincere connection and being able to talk with people. The problem became leaving the room, because with that many people, the subjects keep evolving. So before you know it, you’re two hours in, and your wife is saying it’s time for dinner, and you’re like, ‘But I’ve got one more question to answer.’ So it got a little carried away.”

While Jobrani has cut back his presence on Clubhouse, he intends to use it when appropriate and, more recently, has set his sights on Mark Cuban and Falon Fatemi’s Fireside app.

Naturally, as a comic and podcaster, he finds the idea of having an audience present while recording (a feature that Fireside has offered since its launch) to be intriguing, because they can become part of the conversation. Then, the episode can easily be shared.

“They can be part of a live show, and you can even take their questions. I am a proponent of that,” Jobrani shared.

Jobrani’s love of comedy is matched only by the love he has for his children. The father of two recalled his grandfather’s sage wisdom while reflecting on the one thing in life he wish he had known before he experienced it—“Just how deep your love will be for these people,” he said.

“Kids weaken you a little bit. My grandfather tried to tell me… he used to say, ‘I’m the luckiest man. I’ve had a great life. The moment I started having kids, I became unfortunate.’ That is translated Farsi—he was saying he became tied to them, these people he loved so much… so much so that the stakes in his life were suddenly heightened. He tried to tell me how deep this love would be, but I just didn’t get it. It’s such a beautiful thing.”

Parenting isn’t the only “beautiful thing” Jobrani is doing with his life. He’s also truly helping to change the world… one laugh at a time.

UTR: Does Not Compute

Strong Versus The Machine: Guess Who Wins