Davide Martins got started in the food world to save his family—because his mom is a horrible cook, and someone had to do something about it. So, he took on the task.

Born and raised in Portugal, he did undergrad and grad in culinary school. In Portugal, this five-year course is not just about cooking. It’s about management of business, being an F&B (food and beverage) director, and many other aspects of the food and cooking industries.

“As soon as I finished culinary school, I had a job offer. I went to an interview to be the chef at the Portuguese Embassy in Washington DC. I applied without thinking I was ever going to get the job, since I was just out of culinary school. But three months later, I was in DC. I was there for four years. Five years ago, I moved to the European Union Embassy. Everything was very fast.”

For Davide, applying for that job was like buying a Powerball ticket—he didn’t actually think he’d win. Next thing you know, he was being interviewed by the Portuguese Ambassador’s wife, who hired him. She chose him for the job specifically because he had done internships abroad during his time at culinary school, including six months at a Michelin two-star restaurant in Brussels called “Sea Grill.” 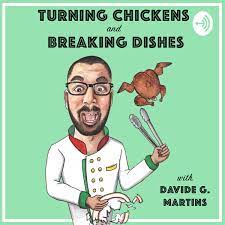 Starting at the EU Embassy in September of 2015, Davide soon discovered that while he was employed full-time, it wasn’t exactly a full-time job, because the Ambassador didn’t want him there every day—he could precook and leave food for a week in advance if he wasn’t expected to be there for official breakfasts, lunches, and dinners. Sometimes, he would have between six and 10 days in a row without doing anything. Realizing his luck (again!) to have such a lot of open time, he was inspired to start teaching cooking classes in a store two or three times a month. That worked its way up to nearly 20 classes a month in the two years prior to COVID-19.

It was the pandemic that caused Davide to decide to jump into podcasting—mainly because he missed the interaction with people that he’d been enjoying while teaching classes.

“I had this necessity to talk with people from the food industry and ask them the silly questions my students would ask me. So, I had the idea of what I wanted in my mind. I had the format(ish). I knew the song I wanted to make, so I asked a friend of mine for help. Then, I started very slowly inviting more local people in DC who I already knew in the food and beverage business, journalists, and people like that. And then I started trying to reach out a little outside of the bubble of local guests. I’m not the best entrepreneur, but I gave it a shot.”

Davide had been listening to podcasts for about five or six years, following a few Portuguese and a few American shows. Funnily enough, he doesn’t listen to any food podcasts.

When Covid hit, a lot of people started transitioning to online classes. Perhaps because English is Davide’s second language, he felt uncomfortable with the idea, believing he needed to be in person to teach.

“For me, teaching online wasn’t going to work. And being Portuguese, we love being with friends and just talking, talking, talking for hours. The podcast seemed ideal, because it would be mine. I could talk for two hours if I wanted with my guests. It could be a small sample of what I do in my cooking classes, which is talk with my students and ask them a bunch of different things. So, I knew podcasting would be the vehicle for me, and I could do what I loved, just without the cooking part. We could still talk about food.”

Relying on his guests for exposure, most of whom come onto Turning Chickens and Breaking Dishes to increase their own exposure but also have followings of their own, has helped Davide grow his audience while still working for the Embassy. He doesn’t have the time to create a bunch of what he calls “empty content”—including multiple daily social media posts—or anything beyond the core content of the podcast itself. A lot of his followers are from Portugal, mainly because he’s one of the few Portuguese podcasters.

When it comes to acquiring and booking his celebrity guests, Davide shares something he learned from the Portuguese Ambassador:

“He said, ‘In the U.S., they’re going to say ‘no’ 20 times. At the 21st time, they open the door for you. But you’ve got to keep banging doors.’ So, I did. With a lot of my guests, it took me trying four or five times, and at the sixth time, they said, ‘Yes, sure… sounds great.’ And so for me, it was always very simple: I would introduce myself—who I am, my work at the Embassy—and that I was starting to podcast. I’d share how I’d been following their work, and that I would love to talk with them.”

Davide’s favorite part of podcasting is asking his guests the lighthearted questions that instantly take them out of “interview mode” and into a deeper conversation—one of his favorite ways to do so is by asking guests about their first memory of taste.

Good taste is definitely on the menu with Turning Chickens and Breaking Dishes—two Portuguese phrases that hold a lot of meaning for both Davide and the show. “Turning Chickens” refers to someone who has a lot of experience, like many of Davide’s celebrity guests. “Breaking Dishes” refers to someone who has exceeded expectations… which he has definitely done by leveraging his luck and his good old-fashioned Portuguese friendliness to talk, talk, talk, entertaining his audience all around the world.

UTR: Across the Pond Sports Podcast