Did you know that stories are more powerful than a slew of facts and figures?

When processing facts and figures, only two areas of the brain are activated, whereas a well-told story engages many additional neural pathways. That’s why learning a language with just facts and figures is difficult, but when stories are incorporated, retention is easier.

A story activates parts in the brain that allow the listener to turn it into his/her own ideas and experience. When the brain sees or hears a story, its neurons fire in the same patterns as the speaker’s brain—a process called “neural coupling.” “Mirror neurons” create coherence between a speaker’s brain and that of his/her audience members.

Stories activate multi-sensory cortices in the brain. Characters in stories generate emotional associations that allow us to identify with them. Those emotions are neural activators that motivate us to move closer to or farther away from something. These emotional responses are deeply embedded in our brain, and they drive our motivations and behaviors.

That’s why The Business of Government Hour podcast produced by the IBM Center is so captivating. Host Michael Keegan delves into hour-long conversations with top government executives and thought leaders and invites them to tell their leadership stories.

“We were a podcast before podcasts became sexy,” said Keegan. “The show, which initially began as a radio show called The Business of Government Minute, is more than 20 years old now. We’re a podcast, yes, but we’re still on terrestrial radio as well, on WFED, Federal News Network.

“I get a weekly opportunity to sit with a government executive and talk about what he or she is doing on the front lines. As my guests reflect on their strategic priorities and the challenges they face, I simply act as a conduit to let them tell their story. It’s a true informational and educational platform to stimulate listeners to learn from another person’s or organization’s journey.

“Our core listening audience is federal government executives who run programs at the highest level in our country. University professors are using our show as a way to educate students interested in obtaining their master’s degree in Public Administration or Public Policy, and those in graduate school. These professors know that our podcast gives great understanding into how real leaders deal with real-time problems. Our sweet spot is the Executive Branch of the government. We talk with leaders about what happens after a bill has been passed and what they do to best implement it.

“We believe stories are the best way to deliver our findings. I’ve had the pleasure of interviewing Dr. Anthony Fauci twice, and the stories he told are very apropos, especially today facing this global crisis. We discussed his work from a leadership perspective. Our podcast helps connect people with concepts that have already been proven, so they don’t have to start from scratch. It’s all about learning from people who have already done it successfully. 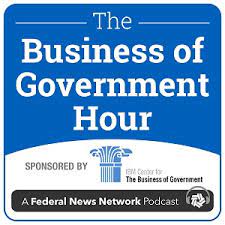 “I believe one reason having these conversations is vital is that oftentimes, it’s hard to get things moving in government. I attribute that to a compliance mindset, which isn’t bad overall, because government must run by a set of rules and regulations. But when the people in charge get so bogged down with compliance that it stifles imagination, collaboration, and innovation, then problems arise.

“Our podcast helps get executives unstuck, because once they share their stories with us, then the people listening can implement that exact strategy for themselves and their team. We offer a snapshot-in-time conversation that can be accessed anytime, on demand.

“Having good leaders in government is essential. Citizens expect their government to deliver, and the system is only as good as the people who make it up. Our government leaders are public servants, so they need to have access to the best information out there to truly serve the people.”

Keegan loves hosting the podcast, because “I enjoy getting to know people and working behind the scenes. I hope that after people listen, they are inspired to dig deeper into the topic, and selfishly, I hope they’ll subscribe,” he said.

Keegan was born in Brooklyn, NY, but currently lives in the Washington D.C. area with his wife of 18 years. In his downtime, he loves to read, work out, paint, and drink wine.

A book that made a major impact on his life is Creating Great Choices by Roger Martin. “This book was very powerful, because it’s all about integrative thinking and the paradigm of how we approach choices—from passively accepting them to actively creating new ones. It made a profound impact on me because it makes you ask yourself if you’re really making choices in life, or just accepting the ones given to you. The integrative thinking focuses on the forces and the belief that there are better answers, even if they’re not immediately evident. So, you’re always testing to see if your choice is the right one to make.”

Another book that Keegan highly recommends is True and False: Heresy and Common Sense for the Actor by David Mamet. “I’m not an actor, but the author is a playwright and storyteller. I’m trying to figure out how to take this book and couch it into a leadership story. Fundamentally, it’s telling actors how to tell a story, and the podcast is about leadership stories. There’s a quote in the book that I really like that says, ‘Deny nothing, invent nothing, accept everything, and get on with it.’ To me, that’s action leadership… really getting involved. That’s why I believe this book can be applied to more than just actors. To me, it underscores emotional intelligence. When he says, ‘accept everything,’ he doesn’t mean you accept mistreatment, but rather you accept reality and take emotional control by being empathetic to the situation and people you’re dealing with. It’s a great read even for us non-actors.”

Keegan continues to be inspired by his parents who are both deceased. “My dad was an engineer and my mom was a homemaker. So, my dad had a really precise mind, and my mom had a really caring heart. I am one of seven kids, and you can still see those same qualities resonate in all of us today. My parents had a great life, strong faith, and an amazing love story. It just goes to show how impactful stories are and why our brain remembers them.”