How often do you hear someone say, “I’m sorry. It was my fault. I am totally responsible.” Rarely is such outright honesty heard today. In fact, in many cases, even when fault is admitted, every effort is made to shift the blame to someone else. What has happened to personal accountability?

According to Webster’s Dictionary, “accountability” is defined as an obligation or willingness to accept responsibility or to account for one’s actions. That’s exactly what the Government Accountability Office (GAO) Podcast: Watchdog Report aims to do for the Federal Government.

The GAO, known as the investigative arm of Congress, is an independent, nonpartisan agency that exists to support Congress in meeting its constitutional responsibilities. The GAO works to improve the performance of the federal government and ensure its accountability to the American people. The agency examines the use of public funds; evaluates federal programs and policies; and provides analyses, recommendations, and other assistance to help Congress make informed oversight, policy, and funding decisions.

The work performed by GAO is crucial because they provide Congress timely information that is objective, fact-based, non- ideological, fair, and balanced. Their recommendations lead to changes in laws which ultimately improve our government operations and save not only the government, but also taxpayers, billions of dollars.

Recently, I had the opportunity to interview four of the men involved with the podcast to glean their thoughts about the importance of government accountability.

GAO Public Affairs Managing Director Charles Young is a former journalist who worked on Capitol Hill as Chief of Staff for a few members of Congress before joining GAO. He started the podcast in 2010, before podcasting was considered “cool.” “It was very low-budget back then. We did it with a handheld digital recorder. Then, we searched for some free and available non-copyrighted music to add to the beginning and end. It was very much a ‘do-it-yourself’ thing,” Young said.

While most federal agencies have a lot of red tape to cut through in order to get even the simplest things approved, Young said that starting a podcast was not a tough sell. “At that time, we were entering an information revolution, and if we didn’t keep up with how people were consuming information, we were going to get left behind,” he said. “The mission of the podcast is to share fact-based nonpartisan work, and to make sure the American public is aware of it and has access to it.”

The GAO podcast is a smaller, bite-sized version of the thousands of recommendations they give to Congress in the form of reports. These reports help to improve government and make programs more effective. About 80 percent of their recommendations get implemented. Because GAO is an independent legislative branch agency, they are able to be objective in the programs they evaluate–many at the request of Congress.

Young is married with two children in their twenties. He was born in Florida, but has called Washington, D.C. home for over 20 years. In his downtime, he loves to travel. In fact, last November, he and his wife visited Antarctica. He also loves photography. His favorite singer is Jackson Browne and his greatest source of inspiration comes from his parents. Although both are now deceased, he says they taught him how to be a good parent. 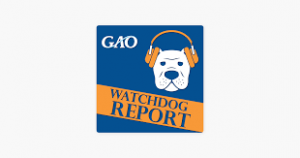 The voice behind the podcast is host Matthew Oldham. He has been with the GAO for a little over two years.

In the past, he was stationed overseas in the Navy, and he has worked as a military civilian journalist. Oldham is married and has a nine-year-old daughter. He loves to read and watch sports. His favorite singer is Bob Dylan.

“In the 80’s, there was a video game called Carmen Sandiego, and with the game came this desk encyclopedia. I remember leafing through it constantly. I really enjoyed the trivia and finding out information that not very many people knew about,” he said. Right now, during this time of COVID-19, the person who truly inspires him is his next-door neighbor—a nurse. “I can hear her leaving very early in the morning and coming home late. She is really answering the call to help.”

Next up is podcast director Jacques Arsenault. His role is to help with the strategy and planning side of things, ensuring there are enough potential episodes in the pipeline.

Born in Vermont, Arsenault grew up all over New England, but mostly in Bristol, Rhode Island. He’s married with two sons, ages four and seven. In his spare time, he loves to bike ride and travel. As of late, he has been listening to a lot of Brandi Carlile.

The best professional advice he’s ever gotten is this: It’s not important to be at the top, or how high up you are in an organization, but rather, how close you are to the center of that organization.

When it comes to his inspiration, he says, “My wife inspires me. She is a professor at Georgetown University, and we actually live in a dorm on campus. Because of COVID-19, it’s been hard for everyone, but especially the senior class. Their vision of the future has changed drastically. The other person who inspires me right now is one of my brothers. He is a music teacher and plays the guitar in bars, but now since COVID-19, he’s confined at home as we all are. So, he decided to put on free concerts on Facebook Live every weekend. Then, he started using them as a way to raise money for local charities. He’s also been encouraging his followers on Facebook to buy gift cards to help support restaurants, and then he raffles them off during his free online concert. That’s amazing to me, to see all he’s doing to give back.”

The fourth man to round out this stellar, all-star group is Christopher Stone, who has worked for GAO since 2013. He is a photographer/videographer and co-producer of the podcast.

Stone was born in Flint, Michigan, and was raised in Jackson, Michigan. He now calls Dundalk, Maryland home. Stone, who served in the Air Force for nearly 24 years as a broadcast journalist, is married “with zero kids, although my wife and I have been in a three-year process to adopt her two nephews,” he said. Because of COVID-19, he jokingly said that right now, painting rooms is his number one task since everyone is on lockdown orders. But normally, he and his wife like to travel. They’ve been to 42 countries and went to Tokyo last year for their anniversary. He was a bit embarrassed to admit it, but his favorite singer is Justin Timberlake.

A proud podcast junkie, he (normally) listens to many different podcasts during his long commute to work. The best advice he’s ever gotten? “It was from my father, who said, ‘I may not be part of the solution, but I refuse to be a part of the problem.’”

Last year, the foursome earned the “Award of Distinction” for their podcast titled, Combating Opioids from the Season 25 Communicator Awards.

Accountability, integrity, and reliability are the core values of GAO, and the GAO Podcast: Watchdog Report aims to reflect that in each and every episode.

UTR: A Hot Dog is a Sandwich