Over the course of her career, Katie Couric has been underestimated, not taken seriously, and deemed “incapable” of completing the task at hand simply because of her gender.

Her legacy will certainly show otherwise.

Inducted into the Television Hall of Fame in 2004, there are few high-profile leaders, entertainers, or corporate executives she hasn’t sat down with, countries she hasn’t reported from, or questions she’s been reluctant to ask.

Her tenacity and willingness to dismantle the status quo while unapologetically refusing to accept the superficial mark the cornerstones of her singular abilities. Few journalists are willing to face potentially excruciating embarrassment and act upon the commensurate uncalculated risks that accompany such choices in the manner Katie does … daily.

The Latin phrase “Audentes fortuna iuvat” undoubtedly applies to her 40+ years in journalism:

Katie is bold—and the rewards for embodying this way of being have been substantial.

The well-deserved beneficiary of many lucrative contracts over the years, perhaps her proudest career achievement is becoming the highest-paid journalist in the world (male or female) when, in January 2002, she signed the largest financial deal ever in television news—$65M over four-and-a-half years to stay at the helm of NBC’s Today.

The secret to her success? Honoring the guidance of her parents… and, her intuition.

“My parents were incredibly supportive,” Katie recalls. “They encouraged me to make mistakes and forge my own path while staying true to who I inherently am.”

An admitted “unabashed extrovert,” Katie’s curiosity about people and ideas, combined with her love of words and language, make for a powerful combination. Writing came naturally to her… perhaps because Dad was a print journalist. Not surprisingly, she chose to follow in his journalistic footsteps.

“I am a huge observer of life,” Katie said. “Journalism is a great fit for me professionally and tailor-made for someone with my personality traits and skills. I can honestly say this has never felt like work. I’m fortunate, because my career is always exciting, fun, and interesting.”

Podcasting has opened up an entirely new paradigm for sharing her affinity for telling stories through sound and conversations. One of her unexpected (and unofficial) audio mentors? Shock-Jock DJ Howard Stern.

“Howard discovered a long time ago that audio affords an entirely different level of intimacy between the host and the guest, and ultimately, the listeners,” Katie shared. “When people are interviewed on radio, they’re more prone to let their hair down. They’re not worried about how they look, their facial expressions, or their body language. To a large degree, it’s an anonymous medium.

“This is very liberating for someone who has a story to tell or intimate details to share. Podcasts afford the same degree of anonymity as radio. We’ve found that many of our guests are willing to talk about delicate subjects that may be difficult for them to discuss through other channels such as video.”

In a profession historically laden with can’ts, should’s and don’ts, Katie’s unwillingness to compromise her standards and sway from her patented, hard-hitting approach to uncovering the real story has attracted fans across multiple generations. Arguably, it is this commitment to running her own race that has empowered her to stay at the pinnacle of the industry for decades.

“I’m guided by my own North Star,” Katie revealed. “Over the course of my career, there were numerous occasions where those who supposedly knew better than me tried to turn me into something I wasn’t. I rejected those notions time and time again.

“To thrive in this business, one must have a certain ‘sixth sense.’ It’s imperative to know in your gut what your next best move is. And, you have to let empathy guide you when someone is talking about a deeply personal matter.”

Often, Katie conducts interviews that are difficult at best, addressing issues such as rape, abuse, misconduct, and other controversial subjects. These conversations can become confrontational in nature.

“At every juncture, I convey genuine compassion,” Katie shared. “Emotional intelligence is required to properly address sensitive subject matter. I have always been wired as an extremely empathetic person. To unearth the truth, you have to make people feel safe enough to share it.”

And, confide in her they do. This is part of her genius. To befriend even those who have participated in questionable activity. To solicit the truth. To ask the questions no one else dares. To be neither judge nor jury.

It is not an act. She prides herself on being the same off camera as she is in front of it—off the microphone as she is on it.

“From an early age, I knew I didn’t want to be a poser or pretender,” Katie said. “People can smell phonies, and I can’t stand ‘em either.”

Her kind nature earned her the nickname ‘America’s Sweetheart,’ although she’s long moved past the moniker. “There’s a statute of limitations on that,” she told Emily Heil of The Washington Post. “And, on ‘perky’… I think after 40, that’s really hard to claim, too.”

While Katie has every right to claim whatever moniker she’d like, ‘The Real Deal’ is perhaps a better fit.

On her podcast, Next Question with Katie Couric, and through her diversified media company, Katie Couric Media, she absolutely keeps it real. Recognizing that the media landscape is changing daily, she endeavors to be at the forefront of those shifts.

“The whole premise of Katie Couric Media is to not only take on independent projects we want to give voice to, but to also work with purpose-driven brands that care about important issues, like the environment or gender-related concerns, and help them best convey their mission,” said Couric. “CBD, violent pornography, eSports, ageism, online radicalization, anxiety, astrology, maternal mortality, how eating meat impacts the environment, etc.—we’re taking it all on and aim to be the source people can trust to help delineate fact from fiction.”

To help bring her vision to fruition, Katie leverages her A-list rolodex to enlist many of the world’s greatest minds. Playing the role of conduit is one she does not take lightly. 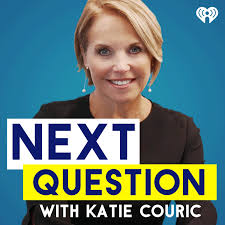 “As a journalist, I’m in a unique position to help others elevate their knowledge and provide them with access to incredible talent,” Katie shared. “I love hearing from people about what they learned and want us to explore in the future. Our goal is to identify stories we feel are important and, hopefully, others will find interesting, too.”

On occasion, these choices are met with less-than-stellar feedback. Katie takes the criticism in stride knowing that the democratization of media is a two-way street: producer and consumer can readily share their thoughts with a simple push of a button.

“Every artist wants to be well-received, and I consider my work in its purest form to be art,” Katie said. “When you receive praise from the people you’re creating for, that’s the best affirmation of all. Critics, whether professional or amateur, have one job… to criticize. At the end of the day, the consumer has the ultimate say in the conversation.”

One of the conversations Katie considers especially important is the one around the battle to find a cure for cancer—specifically, colon cancer. She’s played an integral role in that conversation since 1998, when her first husband, Jay, died from the disease at just 42 years old, leaving Katie to raise their daughters, then six and two, alone.

Instead of curling up into a ball or falling into a deep depression—which she would have had every right to do—Katie got on the table… for a colonoscopy. Emboldened, horrified, frightened, and genuinely concerned about the lack of awareness around this preventable disease, Katie underwent a colon screening, live on air, during The Today Show.

The impact was immediate. According to a 2003 report from the University of Michigan School of Medicine, in the nine months following her campaign, not only did the number of colonoscopies increase significantly overall (15.0 per month per CORI physician prior versus 18.1 per month after), but so did the number of women who underwent the procedure (43.4% prior versus 47.4% after).

Her sister’s death from pancreatic cancer several years later only strengthened her dedication to raising awareness and facing cancer head-on. She is a founding member of Stand-Up To Cancer, the National Colorectal Cancer Research Alliance, and the Jay Monahan Center for Gastrointestinal Health among myriad other cancer-related initiatives.

“A lot of people would have done what I did if they had the pulpit I had,” says Couric. “I don’t feel like a hero for raising awareness. Others who have experienced unimaginable loss would have done this too.

“It would have been grossly irresponsible not to share as I did on The Today Show. It helped me recover, heal, and move forward after losing Jay. I was lucky I had that platform. It is both a privilege and an obligation to use it in a productive and positive way. Cancer just makes you feel so powerless.”

While the acute pain has subsided, the fire to share stories that matter burns strong. Now approaching what some consider ‘the golden years,’ Katie has no plans of slowing down.

“We live in such exciting times. Mass media has really been replaced by niche media,” Katie said. “Yes, there is a lot of content being produced and the paradox of choice exists. However, people will gravitate toward what they’re MOST interested in. There’s a lid for every pot.”

And, rather than bask in the island sun, sipping on Pina Coladas, enjoying the fruits of her labor she has deservedly earned, Katie has other plans.

“Fact is, I never saw work as a means to an end,” Katie said. “It is something I have always wanted and continue to do with enthusiasm. I honestly believe that, even in my sunset years when I’m living in an old-folks home, I’ll likely be the editor-in-chief of its newsletter. The day I stop asking questions will be the day I die.”

Hopefully, that day is far, far away.

Put the Pizazz into Putting a Ring on It! A Podcast for Planning the Big Day with Joy!

Rob Lohman: From Lost to Faithful – Prison to Beyond the Bars

Are you ready to finally get better control of your finances, for real?  Check out the

UTR: The Art of Wrestling

Throughout his career, Colt Cabana has proven that funny equals money in the world of professional

How do you feel about paranormal activity? The Supernatural? Ghosts? Spirits? Demons? Do you believe? The

One of the hardest-hit sectors during the COVID-19 pandemic has been the nonprofit sector. Fundraising is