Is there a wedding in your future? If there is, tune in to Put A Ring On It to get the behind-the-scenes scoop on all things wedding!

After spending nearly a decade in the wedding planning business in Bucks County, Pennsylvania, Danielle Pasternak (named one of the Top 26 Most Influential Wedding Planners on Facebook in the US) and Daniel Moyer (named one of the Top 100 Wedding Photographers in the World by the International Society of Professional Wedding Photographers) have some pretty amazing stories about the good, the bad, and (of course) the occasional ugly that can come with two people joining their lives together.

Five years ago, this dynamic duo teamed up to co-host the Put A Ring On It podcast, which has since accumulated over 150,000 listens and consistently remains on the Apple “What’s Hot” list in the Fashion & Beauty category.

Danielle and Daniel took a quick break from their very busy schedules to share their thoughts on the power of podcasting.

Inspired to join the world of podcasting by their commitment to helping couples all around the world to arrive at their big day with more ease, creativity, and lightheartedness, Danielle said, “I’m a big fan of sharing as much as I possibly can. I think anytime you combine giving people information along with a community to process and use that information, it does a lot of good. Ideally, it’s doing a lot of good for the world.” 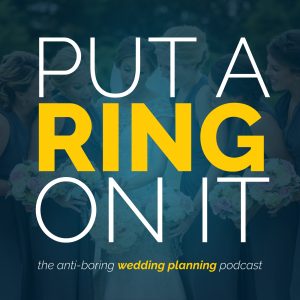 Reflecting on their decision to launch the show, Daniel added, “I actually think we talked about it when we were throwing darts that one night Michael (Danielle’s fiance’) and I were running down the hallway. We both said, ‘Hey, we have so much to share. How can we do this?’ And that’s when I think Danielle was like, ‘Let’s do this podcast idea!’ And then, in true Danielle fashion, immediately afterward there were 100 spreadsheets and documented lists of how much things were going to cost and the timeline for the next three years.”

The pair (who have a ton of fun co-hosting the show together) make a powerful team, each offering strengths in the areas the other has weaknesses: Danielle provides the structure and Daniel the comic relief. They continually shore each other up, as well … as exemplified in their most recent season, when Daniel went on paternity leave for the birth of his twins.

After completing careful research around podcasting formats offered by others in the industry and considering their own schedules in the wedding business, the pair decided on the conversational format, interviewing guests only occasionally. However, they’re not just cranking out content non-stop. It’s important to them to be mindful and intentional about both the quality of the show and how it feeds into and fuels their respective businesses.

“Obviously, there’s a lot that goes into making a podcast,” Danielle shares. “It’s something we do to support our careers. I never wanted it to become such a burden for either of us that we regret it or have really negative feelings toward it, because I think that comes through. I wanted to just make it a very positive thing to put out into the world and help people as much as we possibly can.”

“There’s [been] plenty of times when it hasn’t been the smoothest ride figuring out all this stuff,” Daniel added. “The learning curve is super steep. But I think the thing that it always kept coming back to is that we just were in such a good place to share all this information. We do it for the people who listen. Every once in a while, [someone] will reach out and say, ‘Hey, this is so amazing. You guys are doing so such an amazing job. Thank you so much.’ That’s what ends up really keeping it going. Even when we’re questioning if it’s really worth it, asking ourselves if we’re sure it’s what we want to do. And then there’s that little wink or warm and fuzzy from someone. That’s what we call it when we get feedback from our people out there. Then, we know we’re on the right track, even though the back end sometimes is a little crazy as we’re figuring things out still.”

In order to monetize the show, Danielle and Daniel have tried a number of different strategies, including sponsorships and advertising. Now, the show is primarily funded through the generous donations of their “Ringers”—the term the pair has affectionately given to their listeners who provide support for the ongoing broadcasting through a Patreon account.

There’s one thing you can be sure about Put A Ring On It, now in its seventh season (each season comprised of over a dozen episodes): it is absolutely the most “anti-boring,” best way to discover all the behind-the-scenes best practices and insider info for making your big day the best it can be!