Few five-word strings evoke such strong emotion as “The Wolf of Wall Street.”

For those familiar with the moniker and the man behind it, an opinion—and a strong one at that—is immediately formed in response. There is seldom middle ground when his name arises.

One either loves, or loathes, Jordan Belfort.

Many loathe his past behavior. Indicted for securities fraud and money laundering in 1999 for his ‘pump-and-dump’ schemes that led to investor losses of approximately $220M, he served 22 months in prison for the crimes related to his tenure at the helm of Stratton Oakmont—the securities firm he, along with his partners, grew into a $1B enterprise in less than five years.

“With all seriousness, less than two percent of our activities were illegal,” Jordan recalled.

“In hindsight, of course, we shouldn’t have done anything that wasn’t completely above board. What many don’t know, however, is that a lot of our clients did really well, the largest majority of our efforts were completely legal, and we did a ton of beneficial work including helping to take Steve Madden and 34 other companies public.”

There are also a lot of people who love and admire Jordan. Yes, he committed the crime. Yes, he served his time… 20 years ago. Continually reminding him of and/ or reprimanding him for his choices is unnecessary.

His bank account is reminder enough. Every month, for the rest of his life, he pays a minimum of $10,000 to the U.S. government in restitution to his victims (this is in addition to the $100M+ he’s already paid).

In a society that relishes the comeback, Jordan arguably has rights to the crown.

After all, how many people can say their life was depicted in an Academy Award nominated biopic that grossed nearly $400M worldwide and had legendary filmmaker Martin Scorsese behind the camera and Academy Award winner Leonardo DiCaprio portraying them?

How many people have had their autobiography attain New York Times bestseller status with subsequent multiple foreign language versions and ongoing daily sales?

And, how many people can say they have an incredibly popular rap anthem based on their life with more than 50M YouTube views and countless spins at parties across the globe?

No matter on which side of the fence of public opinion one falls, it is difficult to deny Jordan’s position as a cultural icon. His former extravagant lifestyle, accumulation of massive wealth, no-holds-barred, salacious approach to living, near-fatal addictions, and very public (and admittedly deserved) downfall have allowed him to achieve legendary status.

Make no mistake; he takes personal responsibility for his actions and aims to serve as a cautionary tale for what can happen when excess and greed go horribly wrong. He also understands that his ability to lift himself up from his middle-class roots to join the ranks of the rich and famous is often construed as an inspirational story.

“People connect with ‘The Wolf’,” Jordan shared. “They see the fun and want the luxuries and glamorous elements that wealth can provide, but they’re not stupid. They understand that, to get there, it takes hard work… and, they definitely don’t want to go to jail. Unless you’re a crazy person to start, you don’t want to hurt people.” 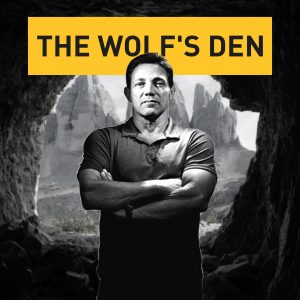 On his Kast Media Network original podcast, The Wolf’s Den, Jordan guides his “pack” to attain their desired level of success without, of course, having to engage in illicit or illegal activities. Often, these teachings take the form of sit-downs with well-known entrepreneurs and celebrities who share their strategies.

Other times, Jordan’s soapbox approach delivers soliloquies on life and business— the good, the bad, and the ugly—to help listeners achieve their desired results faster, without the trial, tribulation, and brain damage Jordan had to incur.

“One of my favorite episodes so far has been when I had the opportunity to sit down with the FBI agent who actually put the cuffs on me,” Jordan shared. “He’s now a friend, and we definitely have mutual respect for one another. He knows I’ve never gotten in trouble again and that I’m not a career criminal.

“It was a really interesting conversation. To have him come on the podcast was, honestly, quite special. It was as if everything had come full circle. I’ll never forget when he expressed his frustration about chasing me for seven years, getting me booked for four, and that I only served two.”

And, while Jordan’s stance on what may be considered “acceptable behavior” has changed, his tone has far from softened. He is not one to mince words.

“I had Grant Cardone on the podcast, and he wanted to talk about selling,” Jordan said. “After a few minutes, I told him pointblank that he’s one hell of a marketer, but he’s not a great salesman. He didn’t take it well and wanted to fight me… literally!

“There’s so much fraud and bullsh*t in the self-help and personal development space. There are all of these self-proclaimed gurus, and I can’t stand it. Don’t look at people who supposedly have money because they stand next to fancy cars, take pictures in front of planes and mansions, and then take them at face value. You have to listen to what they’re actually saying and dig beneath the service. If you listen close enough, and dig deep enough, you’ll find a LOT of inaccuracies.”

One fact that is far from inaccurate is that, despite his misgivings, Jordan’s parents loved him very much and were proud of his accomplishments. While they may not have agreed with all his actions, they loved him unconditionally.

“Even with everything going on, they stood by my side,” Jordan shared. “There was never a day in my life I thought they didn’t love me.”

Recently, Jordan’s dad passed away after a lengthy illness. The last few months were especially rough.

“The running joke is that he could move on to the next life because Scorsese portrayed him in a movie,” Jordan said. “And, we get Rob Reiner to play him. He was thrilled.”

As Scorsese’s work has arguably improved with age, one could easily say the same for Belfort. One need look no further than his current definition of success to understand why:

“Leaving the world a better place than I found it… that’s how I would define success,” said Jordan. “My goal is to make sure that every interaction I have with another human being leaves him or her in a better spot. I may not always succeed, but if I do my best to lift others up, I’ll die with more wealth than money could ever provide.”

For humanity’s sake, one can hope Jordan reaches his final days as the wealthiest man alive.

Dustin Matthews: From Studying Larry King to Smacking Danica Patrick with Her Own Book