Every actor prepares for performance as a part of his or her career, and Joe Towne is no exception. Working with the likes of Rebel Wilson, Jennifer Love Hewitt, Hillary Swank, and Dr. Oz, Joe has carefully crafted “The Performer’s Mindset” in order to find success in the highly competitive Hollywood landscape.

That mindset is not unique to the acting world. Leading athletes, top executives, and everyday people are finding that crafting performance in their lives has become significant to their success, too.

When not acting, Joe has spent more than 19 years exploring and teaching the principles of The Performer’s Mindset via his workshops, throughout which he weaves imagination, flow, and storytelling to unlock a more authentic life for himself.

Earlier this year, Joe was challenged by a podcaster friend of his to share both his story and those of high performers on his own podcast. Having appeared on several podcasts himself, he loved the idea of podcasting as an outlet for imparting what he has learned. So, his show, The Better Podcast, was born last fall. But Joe didn’t want it to just be about his story or his clients’—he wanted to learn and share stories from other well-known masters of The Performer’s Mindset.

The Birth of The Better Podcast

Every podcast starts with an idea. What was the spark for Joe?

“The dear friend who challenged me to start a podcast told me he loved our easy conversations, when we were just having Chai tea together in a library or café. That what really sparked the idea. I started to realize that I had no way of sharing the intimate details of the conversations I was having in private with my coaching clients because of confidentiality. I really wished people could be flies on the wall.

“A very well-known coach out there has taught that every day is an opportunity to be the best version of yourself… to be better than you’ve ever been before. That acts as a driving force for him—he’s in a relentless pursuit to do that at all times, whether he’s making a cup of coffee or talking to his spouse. It also applies to his coaching in the NFL. 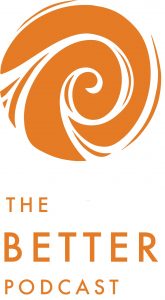 “I thought, ‘Gosh, what an amazing idea. Imagine hearing about what Kobe Bryant did to improve one percent over time for a long time and inspire that same ethic in his family and teammates.’

“That idea of getting better really started to come into focus through what felt like the most challenging collective moment of our lifetime—that of Covid, illness, and disease. These last few years, so much of that focus has been on responding to general news as well as that from our community. I was curious to know what good might come out of a dark, collective moment. But there are a lot of layers to it, whether economic or racial justice or any number of things causing a collective feeling of separation and disconnection from one another.

“For me, it was a reprioritization of what matters. And I thought, “What are you waiting for?’ There was never going to be an ideal time.”

Keys to Creating a Great Show

Creating a show that informs and captivates your audience can be a difficult lift—especially for those with an interview-style format. Joe has been intentional in how he creates shows and approaches interviews. He says:

“I think choosing a setting and an intention—a controllable intention—is important. I can’t go into an interview wanting to please everyone and make them like me. I can’t control that. But I can control where I put my focus.

“I love Johnny Carson’s approach. He had this intention to be more interested than interesting, and it served him so well as an interviewer. I can come into an interview and observe what my interviewee’s eyes are doing, what’s happening in his body language… and then, I’m connected to him. I’m learning a ton along the way.

“Not only do I invite people to be a fly on the wall through the celebration of the highs and lows of a journey, but I am also learning along with my audience. If somebody brings something up that I don’t know, I’m going to go research it. And maybe we all get just a little bit better in the course of the conversation.”

This connection to the guest and audience can be felt in every conversation Joe has. It’s the “magic sauce” of The Better Podcast.