It’s never been so quiet… so dark. There’s something about the press of absolute silence, the whole consuming blackness that leaves me just a little… I don’t know… breathless.

Janus is the Roman god of beginnings, endings, duality, time, transitions, and doorways. He is usually depicted with two faces as he simultaneously looks to the future and the past.

Janus Descending is a science fiction/horror audio podcast narrated by two characters—one going forward through the story and the other backward—who eventually meet in the middle. The episodes alternate between the two perspectives.

“Basically, I just wanted to squeeze some mythology in, but the title does work perfectly with the structure of the story,” said creator Jordan Cobb with a laugh.

Janus Descending is the story of two xenoarchaeologists, Peter and Chel, who are sent to explore a distant alien world and the ruins of a civilization on that planet. They go on this journey alone, which is against company protocol, but with Peter’s older brother in charge, they’re able to cut through the red tape.

When they arrive on the planet, they discover the ruins have sunk into a giant chasm. As they begin exploring, they run into the creatures who caused the end of the previous civilization.

“It’s clear from the start of the podcast, no one gets out alive,” Cobb said. “The real mystery is how they get from point A to point B, and the emotional journey that the characters are going through. I knew from the start people were going to figure that out very quickly anyhow, because I have a tendency to give away too much in my writing. But, so long as I can carry you through the emotional side of things, I can live with that.”

Cobb adds that even though people laugh at her, she considers Janis Descending to be a love story more than a true horror story.

“It’s about the emotional journey of these characters. They’re trying to figure out who they are and where they stand as they face the worst experience of their lives. Who are you under pressure? What do you do when the people you love are in danger? What do you do when it’s the choice between the person you love and yourself? How do you navigate those kinds of moral quandaries? Especially when you find yourself in the situation and the adrenaline is going—there’s an active choice right in front of you, and you have to make a decision. And then how do you deal with the aftermath of those decisions you make?”

The idea for Janus Descending was planted when Cobb and her friend Anthony Olivieri wanted to make a podcast together, but Anthony didn’t have time to create anything new. Plus, they live in different states. So, Cobb decided to take on the task of trying to figure out how to tell a story with two people without having them interact too much.

“That’s how I came up with the single narrator, double perspective. I knew I wanted to tell the story that took place in outer space. It’s one of my three big loves, next to dinosaurs and the ocean. All my projects somehow revolve around those things. This time, it was space. And as I was coming up with the story, I was introduced to the alien series for the first time. 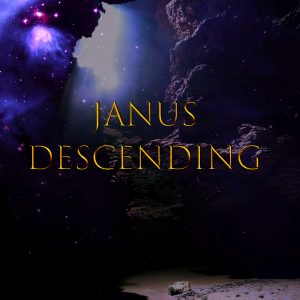 “That’s really what kind of got me going down the rabbit hole of horror stories and those that deal with unnerving situations… the uncanny monsters, yes, but also psychological horror and drama. I didn’t want to watch a lot of slasher movies, because I don’t like a lot of gore or jumpscares. But I’ve always found monsters kind of fascinating, because it’s just different forms of biology, and you kind of get to play with things that already technically exist in the world by mashing all the really horrible parts into just some wretched monster that’s chasing you through the dark, which is always a ton of fun.

“And, as I was going through it, I realized it can’t be a monster story for both characters. It has to have an element of the psychological horror to kind of carry the second thread of the story through. The characters have to experience what’s going on differently, so that there are still two stories to tell. And then it just sort of snowballed from there and wound up as a podcast.”

Along with writing the script, Cobb is an actress and plays Chel.

“I’ve been an actor longer than I’ve been a writer. Actually, I started acting in the second grade, and I was like ‘This… this is the thing I want to do forever.’ And then in seventh grade, I discovered writing, because my cousin introduced me to fan fiction, and that was a long, dark road. Eventually, though, it led to podcasting, so it wasn’t all that bad.

“I always loved listening to audiobooks and fiction podcasts like Welcome to Night Vale and Wolf 359, and all of the sudden, it just clicked. I was like ‘Oh hey, wait, I can make this work. I can write voiceover fiction. I’m an actor, and podcasting is a thing.’ So, I got a couple of my best friends together, and we made our first show, which was Here Be Dragons, and I just kept going with it. It kind of snowballed into this wonderful experience of getting to pull from all aspects of my creativity.”

Even though Janus Descending is a completed story, Cobb has already launched her next project, Primordial Deep, which continues on the psychological horror/drama themes started in Janus Descending. The pilot episode debuted on Halloween, so you can check it out now.