There is a time and place for nonsense.

Lewis Carroll, having written some of the most famous literary works of nonsense—including his “Jabberwocky” poem in Alice’s Adventures in Wonderland—would likely agree.

The Jabberwocky Audio Theater podcast is inspired by and reflects some of that nonsense.

Unlike most podcasts (fiction and nonfiction) which typically have only one podcast per podcast feed, Jabberwocky Audio Theater has six—four shows and two serials. They include:

Throughout history, there has always been a chasm between the bulk of humanity and the enigmatic circle who hold true dominion—those whose influence remains shrouded, save for the rare instances when their designs cross into the outside world.

5,000 years into the future, in a corner of the galaxy where Earth is no longer known, humans and a dozen other sentient races have forged a civilization. Spacers brave the oceans of void between hundreds of worlds for power, glory, and simple survival. This is the tale of one band of spacers and their ship: the Tyger.

From “once upon a time” to before time began, Through the Looking Glass is an anthology series of dramatic readings and other adaptations based on folklore and classic fairy tales.

Whether it’s ghosts from the past to possible futures to a present gone wrong, Through a Glass, Darkly is an anthology series of dramatic readings and other adaptations of classic works.

An original adaptation of the H.G. Wells novel set in the Washington, DC area and performed live for a science fiction convention audience.

An homage and parody to all those stories you’ve read and seen about a crew exploring a derelict ship… and the mayhem that inevitably ensues. Performed live in celebration of the 40th anniversary of the film Alien and the TV series Buck Rogers in the 25th Century.

“We put all the podcasts on one feed because we wanted an episode to be released each week,” said Bjorn Munson, the artistic director of Jabberwocky Audio Theater. 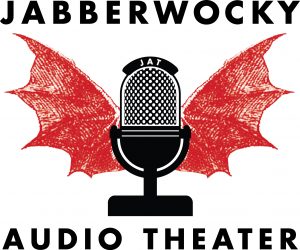 As confusing as this strategy may seem, Munson may be on to something—the podcast was recently nominated for a People’s Choice podcast award in the “storyteller drama” category.

Part of the reason it is so important to the Jabberwocky Audio Theater crew to release a new weekly episode is because the podcast is also on radio.

“If you know about community access television from back in the day, I think it was around 2000, though I’d have to confirm, the FCC actually opened up the spectrum to low power FM in an effort to have a lot more community programming,” Munson said. “And one of our local cable access stations just jumped on it. It’s based out of Arlington County, Virginia. So every Sunday at 4 p.m., we’ve either got something new or a rebroadcast. And we’ve been doing that since 2018. Now, it IS low power FM, so people just a couple counties over aren’t going to hear it. But on the other hand, with my background of growing up really loving vintage radio, it’s very exciting.”

That love of vintage radio was part of what inspired Munson to create Jabberwocky. “I grew up listening to those shows, and was bummed when I got older and realized people weren’t making them anymore. Fast forward past college, during which I did theater and some independent filmmaking, and I found out that a lot of people are using the same tools we use to make indie films to make fiction podcasts/audio dramas—the exact type I loved from way back when. So, I decided to try it, too, because it’s a form of storytelling that I really, really love. And I thought I could bring together a group of people who could do it pretty darn well.”

What really helped Munson get Jabberwocky off the ground was thinking about it as a theater company.

“We’ve got a core group of 50 actors, writers, and musicians we’ve worked with who we try and work into the various shows. We do have them audition, even if we think they’ll be perfect for specific parts, because we still want to hear how it will sound as well as get some new voices involved. What people may not know is the DC area is actually a fantastically busy theater area. There are about 50 local professional theatre companies, and hopefully, they’ll all be able to last through the pandemic. Now, if you include Baltimore and Richmond, there’s probably about 5,000 working or aspiring actors. So, my goal, even as we keep the core of people I love working with, is to also provide an opportunity for new voices… and to continue to grow as a theatre company as well as a podcast.”

Munson nurtures the vintage radio show/theater production energy by having the actors record live with an “old school set up that even includes music stands.”

Currently, Munson has some brand-new shows in the works, as well. “We’ve got plans for more, along with some specials, and yes, they’ll all be on the same pod feed.”