Things were going well for Fergie L. Philippe. He had broken into Broadway as a performer in the smash hit Hamilton, playing the roles of Hercules Mulligan and James Madison. He had traveled with the Hamilton national tour and was settling into the Broadway production at the Richard Rogers Theater.

By all accounts, Fergie had arrived! After years of honing his craft as an actor, taking risks to chase his dream, and traveling the country doing what he loved, things were all coming together.

Then Covid hit. The world watched and waited. This thing would only last a few weeks, right? As large gatherings at concerts, comedy clubs, and even on Broadway were shuttered, weeks turned into months, and months into a full year. What started as a precautionary measure on March 12th, 2020, became a new way of life.

After a year and half of touring with Hamilton and seven weeks on Broadway, Fergie’s journey was forced in a new, temporary direction. But which direction would he go when things went sideways? South—back to Florida, accepting a position as an adjunct faculty member at the New World School of the Arts. At the same time, he worked on screenwriting and productions for his own production company, Et Toi Productions, to stay creative.

It’s often in those moments of uncertainty that we find new paths for our creativity, and so it was for Fergie. On January 19th, 2021, Disney made a surprise announcement that they were releasing The Muppet Show to Disney+. Upon hearing the news, a spark of an idea was ignited within Fergie. Suddenly, five seasons of childhood memories were ready to be re-explored!

As Fergie put it, “I was like, you know, this is the kind of show that could easily inspire an episode-by-episode review podcast. I figured it would be really fun to kind of pair that with its release on Disney. I knew I would listen to it, if it existed.’ From then on, Fergie couldn’t get the idea out of his head. He went on to say: “A few days later, I kind of slapped myself and was like, ‘You idiot! You have to do this now!’”

In that moment, a new podcast was born.

Fergie’s fascination with acting didn’t begin with a desire to become an actor on screen or stage.

It started with a simple childhood love of puppets. 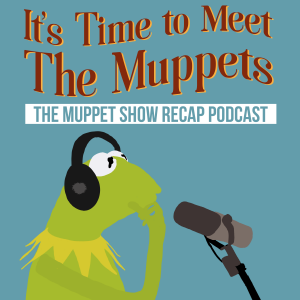 “You know, I was watching tons of Sesame Street, The Muppets, Fraggle Rock, and all these other different, amazing shows with beautiful puppets, and television puppetry just struck me. It struck me in a way that I’m still deeply captivated by. So that’s kind of where it started.

“I became genuinely interested in how it all worked. So when I was a kid, I was making sock puppets and gutting out stuffed animals. But eventually, I kind of moved away from that and more into acting. And I stayed in the acting genre this entire time.”

As I listened to Fergie recount the stories of his childhood and how much puppets meant to him, I was reminded that many of us lose the things we are passionate about as children. We lose the sense of wonder, mystery, and excitement that drove us in our youth. There’s something magical about having your youth re-lived.

“It’s the nostalgia of our childhood,” Fergie offered. “That seems to be where we often find safety in a 100% crazy world.”

Entering 2020, many of us were filled with excitement for an unchartered year. That excitement quickly soured, though, into a desire to simply push through to get to a new season—one without Covid. For some, Covid has required a retreat into simple survival. But for others, they pushed into that uncharted territory with excitement about opportunities for new, unexpected ideas and creativity.

Fergie was one of the latter, and he decided to take a risk on the crazy idea to create that show he had thought about—one that would look at every episode of The Muppet Show. Now, an idea is one thing, right? It’s something else entirely to pitch it to a network like the Broadway Podcast Network, where he had friends, with heavyweight shows all run by the leading voices of Broadway. (What does The Muppets even have to do with Broadway, anyway, right?)

Still, Fergie took the risk. He reached out to his friends at the network to see what they thought of the concept. (For those wondering, the Broadway Podcast Network’ started in 2019 as a destination for all those lovers of theater and the performing arts. They are quickly growing and have a large catalog of podcasts.)

Shortly after, Fergie was on a Zoom call with four-time Tony-winning producer and Emmy-Award-winning director/producer/writer Dori Berinstein.

“The day of, I was freaking out. I really thought they were going to laugh at me and be like, ‘A Muppet podcast? Alright, buddy. Okay. Yeah, sure.’ But I pitched it, and they had the biggest smiles on their faces. They were like, ‘We have to do this.’”

When he asked Dori why she said “yes,” she responded, “I was working for Walt Disney Imagineering when I got to work on Muppet Vision 3D. I worked with Jim Henson, so this just all just clicked in.’

The show was greenlit on the spot, and now, Fergie is releasing new episodes each week. As per his original idea, each takes a deep look into a specific episode of The Muppet Show, examining the history, context, and behind-the-scenes facts while just being a lot of fun!

It’s Time to Meet The Muppets is proof that ideas can spark great things.

Favorite Moment: “‘Turn The World Around’ from the Harry Belafonte episode.”