Despite a hurricane of distraction, they enjoy diving into the pages of great stories. This is music to Carman’s ears, as his mission is to get every child excited about reading—because reading helps every child thrive.

Growing up, Carman enjoyed telling jokes and stories, which became part of his personality.

“Later,” he said, “I just felt like, if I could do exactly what I want to do, I would go to schools and talk with kids about reading and how important it is. I would also love to write books.”

And that’s what he’s been doing for the last 20 years.

He wrote his first children’s book—which is actually a story he’d been telling his own kids—when he was 33.

“I had a little journal that I kept with me as I put them to bed. I would draw maps and places and take notes about the story I was telling, which I was just making up as I went. It became big enough that I remember one night going, ‘This this is a lot of material. I should think about writing a book.’’”

He did, and it became the Alien series, which was published through Scholastic.

Since then, a lot of what Carman has written are the stories he was telling when he was a 10- year-old.

“Many of the best ideas you’ll ever come up with occur when you’re very young. It’s like your brain is in a different place, and it’s growing really fast. Your imagination is just wide open… that’s why it’s a great time to keep a little journal, whether to capture drawings, experiences, funny little stories that pop into your head, or things that happen at school. When you return to it later on, you’ll find solid gold.”

To illustrate the point, Carman recalled driving to the Oregon coast for a three-day vacation when he was 11 years old. He was reading Willy Wonka and the Chocolate Factory, and he was really into it.

He also noticed a lot of strange little hotels along the Oregon coast.

“I remember going into this very odd hotel, and it was like I had been reading that experience as a book in my head. I was sure there were secret rooms and tunnels in it, and if I could just stop the elevator at exactly the right spot, the doors would open to a hidden passageway.”

Carman wrote notes about the hotel, and later on, he used them to write the series Floors, in which “a handyman’s son explores the mysteries of a very odd, very colorful hotel.”

Carman’s imagination and creativity is now inspiring and helping kids all across the world while enhancing their imaginations off-screen.

“When I visit schools, I always ask kids the same question: ‘What’s keeping you from reading?’ There is never a shortage of barriers shared, with the likes of Netflix, YouTube, Fortnite, Minecraft, Snapchat, and Instagram top of the list. None of these things are bad in and of themselves, but together, they build a wall around books that can be difficult for a kid to climb.”

Carman’s books meet kids where they are. “Through the use of video games, extensive video content, and graphic novels,” he said, “we can draw kids in and hook them on reading. Sometimes, we just have to be willing to meet them halfway.”

Carman shares that post-pandemic, literacy rates (especially in children) are at an all-time low—25%. He explains how we can support the strengthening of their social and emotional learning, enhance literacy rates and test scores, and improve cognition by promoting the use of immersive audio educational content… i.e., a podcast! 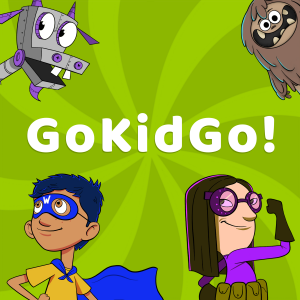 While cooped up at home during the early part of the pandemic, Carman started to pursue an idea that had been percolating for a while. He decided the timing was just right to enlist the help of his colleagues, Maya Glickman, Hollywood tv/film producer, and Jennifer Clary, London-based entrepreneur. Together, they created a company called GoKidGo—The Audio Imagination Universe for Kids.

GoKidGo is the first of its kind, publishing exclusive and free narrative podcasts for children.

It has 12 main podcasts comprised of a full cast of characters. Their high-quality actors make the shows fun and funny.

“Listening is one step away from reading, and the same benefits apply. Kids learn vocabulary and context, and it fires up their imagination. Most importantly, it keeps them off of a screen for a little while. Plus, chances are if they listen to a story, they’re going to want to read more. There’s a lot of data pointing to that.”

After talking to so many kids, Carman learned that once they get to know characters in a setting, they like to go back to the story… not only because it becomes familiar to them, but because they get attached.

So, Carman created a show that is sort of like The Avengers—a universe in which there’s one big town where all the characters reside within their different shows. The characters also appear in the other shows, as well.

The town is called “Pflugerville.” Interestingly, while Carman thought he came up with that name all on his own, it turns out that Pflugerville is an actual town in the state of Texas.

There is one outlier, though—R.L. Stine’s Story Club.

R.L. Stine (whose real name is Bob) is the creator of Goosebumps and a friend of Carman’s, and Story Club is a mystery show that will make listeners laugh and scream.

When Carman heard that many teachers and librarians are using podcasts in the school setting, he realized that might be one of the reasons his shows get so much traction.

“I think we’re getting discovered because I tour a lot of schools, and I have several books in school libraries. I also think kids are actually hearing our shows in school.”

This means that kids, too, are multi-tasking while listening. They can simultaneously play or do their homework, making it a win-win situation for all.

Carman also holds a Zoom event nearly every week, where classes can come in and hear him talk about the shows. This is just one more way he endeavors to connect and inspire as many kids as possible.

If you’d love to limit your child’s screentime with a captivating podcast, check out any one of the following GoKidGo shows:

Bobby Wonder: If your child is into superheroes, this is the one. It’s also very funny!

Lucy WoW: Does your son or daughter love Legos? Or making stuff, in general? Be sure to give this one a listen!

Floozeville: This one’s for the kid who loves to laugh and be goofy. (Think SpongeBob.)

Whale Of A Tale: Who wouldn’t love going on an undersea adventure? This one takes places in a little submarine right outside the town of Pflugerville, and kids get to “meet” all kinds of sea creatures.

Posy Flynn Sings: For kids ages three to eight who love to sing, they’ll no doubt enjoy joining Posy Flynn as she tries out for a competition where the winner gets a record deal.

Tales with a Whale: Swim along with Betty the whale and her buddy Bubbles the seahorse as they explore the great Pflugerville ocean.

R.L. Stine’s Story Club: Join Ivy, the club president, as she takes listeners into the strange, the bizarre, and the frightening world of R.L. Stine. (My kids’ favorite!)

These are just some of the shows under the GoKidGo umbrella, and they’re all totally free… so if you’re ready to spark your child’s imagination, check them out today.