Hala Taha, CEO of YAP Media and creator and host of the Young and Profiting podcast, is living proof that the power of podcasting can revolutionize your life.

No stranger to the world of audio, Hala began her career in radio. While earning her Bachelor of Science degree from the New Jersey Institute of Technology, she was offered an internship at WQHT’s Hot 97—the #1 hip-hop and R&B station in the world.

“Hot 97 became my life. I absolutely loved being in radio,” Hala said.

There, she spent three years as an interim producer of The Angie Martinez Show, eventually dropping out of college to work full time for Hot 97—for free.

While at Hot 97, Hala began exploring the other side of the microphone—as the talent—by creating shows with DJs from the station. “It was what I would call ‘shallow entertainment.’ We interviewed music artists and celebrities and talked about things like their love life. We played games. It was fun, but I certainly wasn’t making any kind of real difference in the world with it.”

When a paying job in production opened up and the station gave the position to another candidate, Hala decided it was time for her tenure at Hot 97 to come to an end. Referring to it as an experience in “overcoming rejection,” she explained how it ultimately led her to a better, more fulfilling path.

“I took all of that negative energy and channeled it into going back to school and launching The Sorority of Hip Hop—an entertainment and music news site that eventually became one of the top 30,000 websites in the world. Our popularity lasted for several years. Simply stated, it was an incredible experience.”

As the spokeswoman of the company, Hala managed 50 female bloggers and gained significant notoriety. MTV, which at the time was amongst the most-watched cable channels, took notice and filmed her for an entire summer for a reality television show. While it never aired, “The moral of the story is this,” Hala said:

“Never give up. You can always pivot and evolve. Just keep pushing forward. If somebody tells you ‘no’… if there’s a gatekeeper keeping you from your dreams… create your own path. Create something of your own that you have control over and give it your all. Things will work out if you commit to trying.”

Living by her own advice, Hala ultimately chose to leave the entertainment industry. While earning her MBA, she “went corporate,” honing her marketing skills.

“I grew up! I leveled up my skills, became really successful, and ended up making a lot of money. Reflecting on my 20’s, I realized I had never really known how to monetize all of the amazing things I had going on at the time. Ultimately, I decided that I wanted to give back. So I started Young and Profiting to teach people how to make money AND have a better, more successful life.” 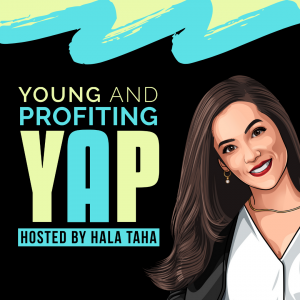 That was in 2018, and in just two short years, Young and Profiting is now consistently ranked in the Top 50 of Apple Podcasts’ Education category and often as a Top 100 podcast overall.

In the saturated podcasting space, this type of growth is every podcaster’s dream. So how does one stand out? According to Hala, “You can’t make it about yourself.”

Translation—she focuses completely on her guests and believes that the best way to grow an audience is to be neutral—to simply provide value in terms of education. She is also careful to leave her personal life out of the conversations… a strategy perhaps born from her life experience as a Palestinian.

“It’s a very fiery issue,” Hala explained. “I’ve interviewed people from Israel, and my family and I are very open. I just try to stay that way so nobody can put me in any sort of box. I hope to make a difference by showing people that Palestinians exist… that we are capable… that we look just like them.

“I think offering an olive branch instead of being polarizing is good for my community. I invite people of all descents on my show and I hope our listeners can see that we are open-minded people. And we’re Americanized—we’re truly here to contribute.”

With sharp attention to the content produced, Hala and her team invest 10-20 hours of research per guest, digging deep into their lives. This way, by interview time, “I know everything there is to know about his or her life,” she shared.

“I know which questions to ask and have a solid sense for how my guest will answer them. I know how to follow up on anything said and how to extract the right information into our conversation. Every single episode includes actionable advice listeners can act upon to improve their lives. I never want our show to be a waste of time for ANY of our listeners.

“Therefore, it’s never about me or pointless fluff. That’s what we really pride ourselves on, and I think that’s what our listeners have come to appreciate and expect from us. And I absolutely love it, because it’s so much fun! This is my passion. I am driven by the joy of our listeners and the enthusiasm of my hardworking team.”

Not only does Hala love podcasting and the difference she makes via the medium, but her success has morphed into something even bigger: a new career.

Although she is currently working for Disney Streaming Services, Hala’s entrepreneurial fire has been fanned, and her final day on the J.O.B. may be quickly approaching. Why?

First, because last April, she and her family contracted COVID-19. Sadly, her father passed away from the virus the following month, and the loss was devastating. The pain served as a powerful reminder of how short our time on Earth really is, which resulted in her re-motivation to seize the opportunity to make the most of hers by supporting others in living their best life.

Second, Hala’s success in podcasting has secured enough high-end clients for her to take the plunge into full-time entrepreneurship.

She credits her entrepreneurial evolution to “skill stacking.”

“It’s something I learned from Scott Adams, the creator of Dilbert. The idea is that you stack different skills from your experiences to create a unique value that no one else can replicate. And the real beauty of it is that you don’t have to be the best at every single thing.

“So I have radio experience. I’m an excellent marketer. And I think I’m a decent podcaster—definitely not the best in the world. But I try really hard, and I conduct a ton of research so I can offer solid content. I also know how to write really well.

“I can put all of these skills together, and all of a sudden, I’m a unique package. I’m able to provide something that nobody else can. It’s basically connecting the dots of your past.”

With rare exception, Hala’s clients began as guests on Young and Profiting. When they witnessed Hala’s marketing magic, they sought her support, and her skill stacking began paying off in bigger ways than she had ever imagined.

“It started with Heather Monahan. She came on my show and liked what she saw ‘behind the scenes’ so much that she became very interested in hiring me. She kept saying, ‘I’ve seen all your stuff. I’ve seen what your team does.’ She was so impressed that she told me I should start a marketing agency. And she said, ‘I want to be your first client.’ How could I say ‘no’? Since then, I’ve secured CEOs, celebrities, and top podcasters as clients the same way. Now, I have a team of 27, who I can pay! It’s awesome!”

Utilizing her arsenal of talents to make Young and Profiting the success it is, Hala now offers “end-to-end podcast marketing” to her clients. From targeting, pitching, and booking guests to preparing research for interviews, show prep, writing scripts, video and audio editing, sharing content pieces, promoting, and more, “We do it all, from A to Z, to produce and market your podcast,” Hala said.

With a top-rated show, increasing fame, and a growing, loyal, borderline-fanatic following, she’s often asked for suggestions about how to build a Top 50 podcast. Her advice:

“Don’t be afraid to start over. I went from targeting the ‘urban’ market—young millennials who were into partying and listening to music—to a four-year hiatus from radio during which I was completely forgotten, to targeting professionals who want to improve their lives. And here I am! So, remember, even if you start over and fail, you don’t start from scratch. You start from experience.”

As for the future of podcasting, Hala believes VR and new technologies will continue to drive the growth of the medium.

“Eventually, through the magic of virtual reality, it will be like my audience is sitting right there with us during an interview. Radio is a dinosaur—a dying breed. It was dying even when I was in it years ago, and it’s getting worse and worse. People feed you content, and you really have no choice in terms of what you’re listening to other than switching the dial.

“People want to have control over their content. They are used to consuming whatever and whenever they want, and they want to know what they’re going to listen to before actually listening to it. With podcasting, there is no required format to follow. There’s no formula. No rules. That is appealing to the younger generation, and I’m confident they’ll take the industry even further because of the role social media plays in our lives.

“Podcasting WILL replace terrestrial radio, and we’ll see it taken to a whole new level by adding visual components and being innovative in terms of promotion. The future is wide open, and that’s just so exciting.”

Add to that sense of excitement the results Hala’s perseverance and her team are able to generate, and you have all the ingredients of a formidable force to be reckoned with for decades to come.

Max Out Your Life!

In my hunt for great women in STEM (Science, Technology, Engineering, and Math) who make science

When I was a kid and snuck a sip of my mom’s martini, I hated

Changing The Landscape Of Podcasting Through True Crime

In a number of true-crime enthusiast circles, Sword and Scale is one of the podcasts that