Gus Frerotte grew up in Ford City, PA, just outside of Pittsburgh. He played many sports, including basketball, football, and baseball. He also loved the Steelers, his favorite player being Terry Bradshaw.

“I bleed Black and Gold,” he said. “In the fall, I play pick-up games, go to the church, and get home by one to watch the Steelers.”

Ultimately, Gus decided to pursue football, saying, “It gave me the greatest opportunity to get a scholarship and play D1.”

He chose to play for the University of Tulsa. He was not completely ready to be a student athlete, though, which eventually resulted in a sit-down with his coach.

“My head coach told me that I needed to do the right thing, work hard, and play nicely with my peers,” he said.

In Gus’s junior year, he met his wife Anne. Since it was a long-distance relationship, they spent many hours talking on the phone. Luckily for Gus, Anne was a super-focused college student and good influence, helping him stay on the right path.

Gus became determined to step up his game and be the best person he could be. He spent hours improving his skills in the off season. Clearly, his hard work paid off, as he went on to contribute to the team’s win against Texas A&M and subsequent Liberty Bowl. The team has also been credited as having helped grow the football program to what it is today.

Best of all, Gus recalls fond memories of playing at the university.

He was also confident, as he always had been, of his ability to play in the NFL. Passionate about the sport, he decided to pursue his dream. Anne was fully supportive, willingly placing her own dreams on the back burner to raise the kids so Gus could play professional ball.

Gus was drafted by the Washington Redskins in the seventh round. However, they had already drafted a quarterback in the first round, which meant he didn’t have a good shot of playing. 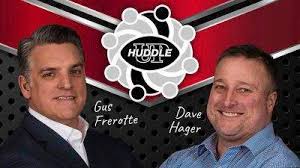 But then, Gus’s coach took a chance on him. Despite having only thrown a few times in high school (since they ran the wing tee), he was open to learning, and was effectively molded into a throwing QB. Gus credits his coach Cam Cameron with his success.

“When you get an opportunity, make the most of it,” Gus advised. That’s exactly what he did, and it resulted in his long career in the NFL.

Gus played for seven teams in the NFL, and he says he loved them all. But his favorite team will always be Washington. “They took a chance on me when I was just a guy from Ford City,” he said.

Gus passed his love of the game on to his kids, who went on to play football themselves in high school. His son Gunner played in college, as well, but had other passions that kept him from pursuing the game as his primary focus.

Two years ago, Gus launched his podcast, Huddle Up With Gus, to talk about sports with other athletes as well as comedians, actors, attorneys, and more. Now with over 100 shows produced, Gus believes the show’s success is thanks to his wide variety of guests.

Gus takes a lot of time preparing for his interviews. “I go to the internet and do some digging,” he said, “because many others have interviewed these famous people before. I want to ask different questions—ones these stars have never answered.”

Gus really enjoys being a podcaster. He likes to connect with people in the podcast community and spends time sharing and learning on Clubhouse. He also offers the following advice for first-time podcasters:

“There will be good times and bad times. It’s a rollercoaster ride. You are never going to get rich from it, so you do it for the love of podcasting.”

Add podcasting to the list of loves Gus has passed on to his sons—they are now hosting one themselves called The Quality Control Show!

UTR: All the Smoke