Baby boomers may be the most ‘famous’ generation. Maybe that’s because it is one of the largest, in terms of number of people in that age range. Or maybe it’s because they are among the oldest still walking around.

Love ‘em or hate ‘em, millennials may be the most talked-about generation. If you attended any business or marketing seminar between 2005 and 2015, you probably heard how important it was for your business to connect with this group.

But what about Generation X?! Some call it “the forgotten generation.” Others say these are the ones who have deliberately chosen to lay low to avoid the problems created by baby boomers and the whining that millennials are known for! (Hey, everybody has a right to their opinion… right or wrong.)

Born in 1974, author, comedian, and podcaster Jen Kirkman is quite possibly the perfect spokesperson for Gen X. She candidly shares her opinion on this topic (and whatever else is on her mind) on her shows, Anxiety Bites and No Fun (more so on the latter than the former).

Podcast Magazine® had a chance to grab some time in Jen’s busy schedule to have a fun conversation about her podcasts (and their topics, like family and the differences in generations), writing, Netflix specials, and a whole bunch more.

“I think talking about your family is a really fun and easy way to highlight generational differences. If you do it right, it can be funny for both generations. I know that my parents are very special and funny, but they’re no different than anyone else’s parents. I try to explain things that I know other people experience, too, whether that’s some weird thing my mom says about religion or advice they offer based on how they would have done things in the 50s. I think it’s pretty relatable.”

This interviewer had to know: which of Jen’s two podcasts is her favorite (and the easy answer—”I love them both”—wasn’t allowed)?

“Anxiety Bites is absolutely my favorite. These are very different shows, but anxiety is what I’m interested in talking and learning about. I also love every single person I’ve interviewed so far. I learn a lot from them. And I think I’m doing a good thing by getting this information about anxiety out there. I could talk about it 24/7.”

Talking about anxiety 24/7 would probably make even the sanest person anxious. Fortunately, Jen doesn’t have to, and neither does anyone else. Anxiety Bites releases a new episode every Wednesday, featuring new topics and Jen’s interviews with a multitude of experts.

Jen can be considered a junior expert herself, at minimum, given her life-long panic and generalized anxiety disorder (GAD).

Anxiety Bites is yet another example of a talented comedian taking on a pure passion project that overlaps categories.

Interestingly, Jen doesn’t recognize herself as a talented comedian. She even quips about how she thinks she’s not that funny in the February 23, 2022 episode of Anxiety Bites—“OCD and Comedy.”

Granted, comedy is relative. However, to many who listen to No Fun with Jen Kirkman or watch either of her Netflix specials, she is considered pretty darn funny… especially to her fellow Gen Xers.

Perhaps, then, she is simply overthinking or being too self-conscious. “I’m talking about myself on No Fun,” Jen pontificates. “Or at least about things from my point of view. I do feel like it must be monotonous for people to listen to. It’s not like I’m some cult hero listeners are obsessed with. They’re probably out there saying, ‘Calm down. I listen to you while I do dishes. Relax… it’s fine that you talked about your world view for an hour.’”

Anxiety Bites is clearly number one on Jen’s passion-priority list right now, as she quickly returned to it. “I can always find something to say about anxiety. I try to have different facets of anxiety within the topics we talk about every week, yet I’m still only scratching the surface. I’m leaving a lot on the table.” 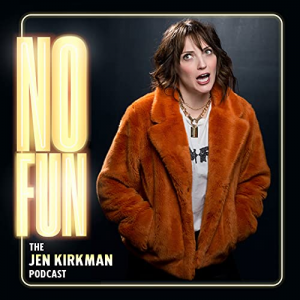 One might expect a bunch of laughs from a podcast like Anxiety Bites, hosted by an established comedian who has been diagnosed with anxiety. After all, if you want to hear the best jokes about alcoholics, you go to an AA meeting… right?

However, while there are certainly plenty of funny moments and stories in Anxiety Bites, Jen approaches her interviews with more of a serious and inquisitive angle.

“I think when you try to interject comedy into something that doesn’t need it, it detracts from the content,” Jen explains. “I’m not saying it doesn’t belong at all. The premise of the podcast is that we’re going to talk about anxiety in a way that’s not so serious, but it also isn’t ‘funny.’ The comedy is less in your face. For instance, I’m going to have a neuroscientist on, and he’s going to use the word ‘sh*t’ instead of a clinical word. It’s not ‘funny ha-ha, laughing my *ss off,’ but it’s different in that it makes light of it. It’s not two intellects going at it. I just want it to be easy to listen to and approachable.”

Sometimes, the funniest stories are those that aren’t intentionally comedic. The flipside is also true in that deliberately injecting humor into a conversation that wasn’t meant to be funny can make it anything but, as Jen points out. “I find when you’re really tuned into and interested in something, too many jokes can kind of snap you out of it.  Have you ever talked to someone, maybe at a party or during dinner, and you’re taking in this really interesting story when she brings a joke in, and you’re like, ‘But get back to the story! I don’t need your jokes.’ Jokes can ruin a story, too.”

While Jen may not be a certified expert on anxiety, she certainly is knowledgeable about the subject and has a few stories herself to share. “I know a lot about anxiety. I have experience with it. I feel like I’ve had a ton of recovery and have a lot to share. This is just another side of me. I do think that things I’ve learned from being a funny person for a living definitely help certain aspects of the podcast. That may not be visible to the naked eye—well, to the naked ear—but I know that I’m bringing something a little different to it. It’s a nice respite for me.”

Someone without anxiety might wonder what it would be like to be diagnosed with anxiety yet still get up on stage in front of hundreds of people to make them laugh. “Ironically, the one place I never had any anxiety is on stage,” Jen reflects. “Dr. Jud Brewer, who I interviewed on my show, explained it best. He said when you’re doing something you love, whether that’s being onstage or knitting, you’re in your flow. There’s no room for thoughts to come in and start attacking you. So, there’s really no room for my brain to go, ‘What if you died right now?’ and other crazy thoughts. I feel normal feelings on stage. I don’t know what it would be like to have stage fright or anxiety. Luckily, I’ve never had to experience that.”

“My anxiety came into play while I was driving on the freeway and flying to and from gigs. It used to be that I’d avoid the things that made me anxious—avoidance was my first choice Then, I eventually realized that I needed to do the very thing in my life causing it, instead of avoiding it.”

Fortunately for us, Jen worked hard on overcoming her anxiety. Otherwise, we may have never been exposed to her brand of comedy.

Both of Jen’s shows prove one major point: whether you’re a baby boomer, Gen Xrer, millennial, or Gen Zer. there’s a lot that is funny about each of us. Maybe it takes a comedian, rather than a neuroscientist, to really help us understand that.