Kristel Bauer, who has an extensive background in healthcare, decided to start her podcast, Live Greatly, shortly after leaving clinical practice.

“I learned a lot while working in integrated psychiatry. I became an integrated medicine fellow, and I saw so many people who were sacrificing their well-being while trying to achieve success.”

Kristel felt compelled to share the message that there is a better way… that you can have both optimal well-being and optimal success. This became the vision for the show: learning how to achieve optimal health in mind, body, and spirit to attain success.

Episodes take the form of interviews with CEOs, experts, and elite athletes to get their perspective on these topics. New for 2021, every Friday, they release a shorter two-minute show in which Kristel offers support via tools for your personal development journey.

This mission is something I can relate to, as it really aligns with my own Awaken Your Alpha podcast.

It is worth noting that coming into podcasting, Kristel had zero experience in audio or media. She was still seeing patients full-time before her foray into the medium.

“I was clueless, but I knew I had a message, and I wanted to share it.”

To start, Kristel ended up reaching out to local successful podcasters for tips and connection.

“I got all this help from our local media lab just north of Chicago, and that got me started. Then I tapped into those relationships that I had built. I began talking to people I knew to share these different messages.”

After about a month’s preparation, Kristel released the Live Greatly podcast in late February of 2020. By average standards, that’s a pretty quick timeline. 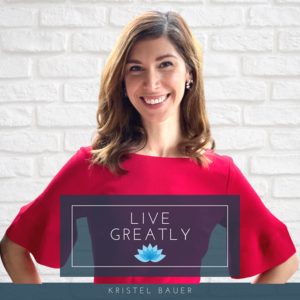 “If I knew then what I know now, it probably would have taken me a lot longer. I didn’t overthink it, and that worked out really well. I have tweaked as I have gone about it, and now, I have a team who helps me edit.”

However, Kristel’s biggest surprise was not realizing early on how slow growth can be. At the time, she was doing it all on her own, and she didn’t start with an audience. She was only just starting to build up her social media platforms when she launched everything.

“I started my own Instagram account after I launched my podcast. I wasn’t on LinkedIn, or any social networking, so that was challenging.”

Podcasting is a long game, and Kristel admits to being a little impatient in those early days while things were building. So, she made sure to remind herself of why she is doing it. Focusing on having fun and getting to know interesting people also helped Kristel stick with podcasting over the last year.

“Initially, because I wanted to get my message out to a bigger audience, I thought the podcast would be great for launching my speaking career. Then, Covid hit.”

Like many of us podcasters had to, Kristel adapted and pivoted quickly as the year unfolded.

Armed with the knowledge that what we eat significantly impacts mental health, Kristel launched her first course, Healthy Mind Starts in the Kitchen, as another direct way of empowering people during the pandemic. She has since gone on to launch additional courses focused on well-being and performance.

“I didn’t think about monetization for about the first four to five months. I was trying to be grounded in what I was doing, and then I was like, ‘How can I make some money to support what I am doing?’”

In the beginning, Kristel released episodes sporadically—basically, when she was able to get around to it. Sometimes, that was every two weeks, sometimes three… there was little consistency. But with 2021 came Season 2 of the podcast, and Kristel committed to a more structured and consistent release schedule, which amounted to one episode per week. This turned out to be a great move for the show and contributed to its growth.

“I began bringing in a team to help me with bits and just recently outsourced everything else besides recording.”

I can hear the massive relief in Kristel’s voice as she tells me this, and it is a long way from the beginning of her podcasting journey. Still, the biggest challenge she had to overcome was thinking it was going to be easy. Take, for example, Kristel’s expectation that most potential guests would say “yes” to an interview. But they didn’t.

“I reached out to some big names early on, but they wanted to know my download numbers and my social media following. I just didn’t have those yet.”

She knows now that this was all part of the process. Something else unexpected (but more welcome) were the great friendships she built directly from podcasting. So, Kristel stuck with the process—she kept asking and kept building, and eventually, more and more people did say “yes.” One such guest even ended up hiring Kristel as the wellness advisor for his startup company.

“What I have found with podcasting is that when you have one notable guest, you then tend to get a more notable guest. It just builds off of each other. It has been such a big learning process for me.”

This momentum is a powerful force in podcasting that has definitely proven true in my podcasting journey, too. If you are reading this and have a podcast that is heading in the right direction, don’t take that momentum for granted. If you lose it, it does take a lot to get it going up to speed again (unfortunately, I know this from experience, too). Overall, I wondered about Kristel’s opinion of podcasting now that she is into her second year.

“Podcasting has been such a wonderful opportunity for me to establish my own platform and open the door to new relationships. I think wherever people are at, if you are looking for a window to meet awesome people and have something to offer, podcasting is incredible for that. It has opened doors I never would have expected.”

In closing, and at the risk of sounding like a shoe commercial, I love Kristel’s advice for aspiring podcasters:

“Just go for it. You’ll learn as you go. That first episode, you’ll feel a little awkward, but just go for it.”

UTR: The Past & The Curious