The True Crime Category certainly plays an important role in society in that the genre often keeps cases in the public eye (or ear). But sometimes, we just want to just be entertained, right?

Well, what is more entertaining than three friends who not only talk about murder, but also the unexplained supernatural and folklore? That’s exactly what you get when you listen to Murder, Myth, & Mystery.

This is a true-crime podcast that you can not only enjoy during the Halloween season, but all year round—as exemplified by their fans, as Murder, Myth, & Mystery has consistently been voted as one of Podcast Magazine’s Hot 50 for a number of months now, topping the chart at number five overall in September.

After listening to a number of episodes and feeling like I was sitting at a table with hosts Mary Pellom, Erik Pellom, and Sara Barratt at a trendy coffee shop, I recently had the chance to have an actual chat with them.

I began our conversation by joking that, even if I hadn’t liked their show, I would still eventually have to talk with them since Murder, Myth, & Mystery kept landing on the Hot 50.

“We have the best fans in the world,” Erik exclaimed. “Everybody says that, but really, we have developed something close to a family.”

“That is the exact word I would use,” echoed Mary. “Our listeners are just incredible,” Sara agreed.

I mentioned that I already felt like I was one of their friends, too, having listened to a number of episodes, and asked about the impetus for starting the show. “I love that you feel like we’re friends,” Mary responded. “That was the whole premise behind the idea.”

Mary went on to explain that, in the early episodes, they just dove right into the show without having much conversation among themselves. Later, their fans shared how much they enjoyed their personalities and encouraged them to have more friendly banter among the three of them before leading into the featured stories. 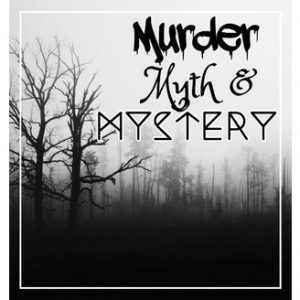 “I listen to so many true-crime podcasts,” Mary continued. “But I wanted to produce something different. So, I came up with the idea of having three segments…”—a murder, myth, and mystery segment for each main episode.

They also produce “minisodes,” which cover just one topic. “We let our patrons choose the topics of those,” Erik explained.

When it comes to the main episodes, content is chosen by the hosts. “We rotate every week,” said Sara. “One week I take murder, the next week Mary takes murder, then Erik takes murder, and so forth. Personally, I am constantly on the lookout for stories. I have a list miles long of topics I want to cover.”

“We made an agreement early on to stay away from the ‘big-time’ murders,” Mary added. “Like Ted Bundy or other well-known cases. Fortunately, at more than 150 episodes, we still haven’t picked the same topic among the three of us.”

We talked about how adding stories on the supernatural and folklore creates a different twist on a true-crime podcast. “Some of my favorite reviews are when people say, ‘I came for the true crime and stayed for the myth and mystery,’” shared Mary. “We have had people say, ‘We weren’t even into mythology, but Greek Mythology is messed up, and we’re into it now!’ We purposely cover the myth in the middle of the show, because most of the time, we have a good time with it. The myth is usually so ridiculous that it creates a more light-hearted feel coming off the murder story. It really balances out the episode.”

“Sometimes, we need that,” Sara mentioned. “Hearing the murder stories can be so depressing that we all need the boost.”

“We try to add levity to the show where we can,” Erik pointed out. “It is dark material sometimes. So, we add levity without being disrespectful. We never joke at the victim’s expense.”

We delved into how the myth portion often allows for many more jokes and laughter. I couldn’t help but mention how disappointed I was to learn that pirates don’t actually begin sentences with “arrrgh.” That brought a laugh to all of us.

“Our myths are all over the place,” Erik continued. “Sometimes, the stories are from actual Greek Mythology or Norse Mythology. Other times, they’re just debunking certain thoughts or beliefs in our world.”

“My personal favorite is covering urban legends,” Mary added. “There’s always some factor of truth to the story, and then it builds up and goes a little crazy.”

The mystery segment grabs a lot of attention as well, as the trio covers hauntings, UFOs, and unsolved cases. A few of the topics in that segment so far include the Fairmont Banff Springs Hotel, the Man from Taured, and the SS Baychimo.

We circled back to what really makes Murder, Myth, & Mystery work, which is the personalities and openness of the hosts. “We are very open about our own struggles,” commented Mary. “Anxiety, depression, and even postpartum. I think that makes us relatable. People shouldn’t be ashamed if they have certain thoughts or problems.”

Speaking as a fan of true-crime podcasts, I shared my one caveat when it comes to Murder, Myth, & Mystery—the lack of descriptive episode titles (i.e., Episode #159 or Minisode #119). In order to learn what the episode is really about, you have to go into the information section. This makes choosing a particular episode a little more involved.

“There actually is a method to our madness with that,” Erik replied. “The problem is, we cover three subjects. If you put all three of them in the title, it’s going to be really long. We tried it, but we kept running into the restriction on number of characters.”

Having to delve into the description is a small price to pay to enjoy Murder, Myth, & Mystery. So, whether you are looking for something a little different, or possibly trying to get into the Halloween spirit, this is a podcast that is definitely worth a listen.