In Australia, Dave Mathews recently launched a podcast for kids (and parents) to listen to while brushing their teeth.

In our first-ever joint interview, my son Dylan (9) and I talked with Dave about the inspiration behind Brushy.

“One night, after about the 15th time asking my kids to brush their teeth and them ignoring me, I thought, ‘There has got to be an easier way to get them engaged while they brush!’” Dave shared.

Thus, the idea for Brushy—a two-minute show to keep kids entertained while brushing—was born: “It’s an educational podcast, so we talk about things like dinosaurs and elephants. We’ve done one episode on farts, which became one of our most popular. And we finish with a couple of jokes from my daughter,” Dave said.

Planning to soft launch Brushy in November 2019 to solve this (dare I say universal) parenting problem, Dave figured he’d “work it all out slowly.”

“It got picked up by the Daily Mail, and by a national TV broadcast,” Dave said. “It ended up being one of the best podcast launches we have ever had here in Australia!”

“As a content creator, I do four hours of radio every day. I am always looking for any kind of content, so I understand the importance of pitching to a broadcaster with the story already there,” he explained.

And he was right—people (including Dylan) were interested straight away. Covering topics like germs, animals (think hedgehogs, whales, chameleons…), rainbows, babies, and mind-blowing facts, hundreds of kids began tuning in while completing this twice-daily chore.

Producing the podcast with his own company, Castco Media, Brushy is one in a series intended to help solve real-world issues in short increments. Next up? A show for young people about eating disorders. 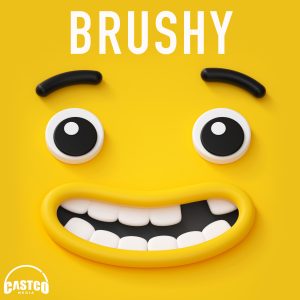 “I’m passionate about this ‘micro-podcasting’ framework. Short podcasts (two to 10 minutes) to fill in the gaps of the day for different people,” Dave said.

Maybe right now, you’re reading this thinking how easy it must be to produce a two-minute podcast.

Here’s how long it typically takes to produce that two-minute “golden nugget”: 15 minutes to write it, 20 to record it, and 90 to produce it.

In other words, even the shortest show is a labor of love.

Personally, I appreciate the way Dave is growing his shows into a network. I’m actually following suit with my six-year top-ranked Awaken Your Alpha show. It’s so exciting, to be able to expand into a network as we niche down on specific topics we’re passionate about!

Speaking of next steps, Dave said, “Australia is really just discovering podcasting, which is crazy. I get to learn from a lot of American podcasters and see what’s been working.

“My history is in radio. The instantaneous nature of getting information out on that platform is great, but you have a lot of restrictions. You are filtered a lot with regulations. I love the fact that podcasting is so free that if you are just true and honest, you will find your audience.”

Brushy is proof that there’s something to be said for “going niche” in the world of podcasting. Dave also believes its essential to have a face on your podcast artwork. Choosing not to feature his daughter’s, Dave decided on a cartoon face, instead. Paired with a very clear “elevator pitch” description, his show has received quite a bit of attention straight out of the gate.

Speaking to that, Dave said:

“You can do the weirdest stuff, and there will be people who connect with you. You can go super niche and find your crew.”

Not only is Dave helping parents all over the world ensure their kids brush their teeth, but he’s also inspiring others to niche podcast, too—including my son! Thanks to this interview, we’ll see where he goes next, as he walks in his dad’s footsteps.

Dustin Matthews: From Studying Larry King to Smacking Danica Patrick with Her Own Book

Doleo: From Everyman to Vigilante