The most shocking element of the scene before her was not the thick pool of blood puddled beneath her newly adopted son, nor was it the fact that the handle of her fabric scissors protruded from his abdomen. It was the tranquility painted upon on his face.

What happens when a normal person with a unique genetic condition that is both an advantage and a disadvantage becomes a vigilante?

“Our podcast is largely an origin story of an everyman finding his way into vigilantism,” said Jared. “My brother and I were huge movie buffs in the 80s and big comic book fans before it was cool. I always thought the origin story was the best part of the superhero tale. You get to see his motivations, powers, and how he got to where he is. I find that to be the most fascinating portion of the story. [Conversely,] when it’s jam-packed with huge villains, scenarios, and catastrophes, it overpowers the story. We want to focus on that very difficult decision to step outside of your normal life to try to do something bigger.”

Doleo tells the story of Ryder Daniels, who has a genetic condition that eliminates sensations of pain, heat, and cold. “We all think it sounds like a great idea, right? This inability to feel anything. In theory, it would be a huge asset if you are a superhero taking punches, kicks, and bullets,” Jared said.

“But the reality is, this condition is wildly debilitating. It has very serious consequences physically and mentally. Just think of the problems you’d have if you couldn’t tell your hand was on a hot stove, or if you were walking on a beach and stepped on a sharp stone. You and I would step back, to avoid putting our weight on it. But Ryder wouldn’t. So, while the condition seems like a huge advantage, in many different scenarios, it’s not. It’s kind of cool to explore with this character how different situations are helped or hurt by his abilities.”

While Doleo is a fiction podcast, it is not considered an audio drama. In fact, Doleo was initially written as a novel. 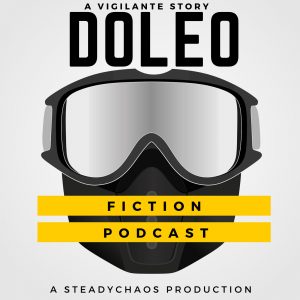 “I published a different book about 10 years ago,” Jared said, via a contact given to him by his cousin who once wrote for Marvel. However, the end result was nothing like his original vision.

So, when fiction podcasts started coming around, he decided to give that medium a try with Doleo, rather than pursue the more traditional publishing route.

“Jim Heskett has a podcast called Thriller Fiction Podcast,” Jared said. “He’s primarily an author who writes novels, but periodically, he uses podcasting to promote his novels. And he’ll read his own books in true audiobook format. He didn’t have a lot of notoriety, and I don’t know how his sales are, but I got into the book and I enjoyed it. And I thought, ‘I have a book that’s never been published sitting right there. Maybe this is something I should do.’ Right around that same time, Josh started a YouTube channel doing funny video mixes. So, I asked him if he would like to flex his editing muscles on a podcast, and he said ‘yes.’ He regrets it wildly.”

Josh jumped in to add: “So he wrote the book and then approached me about narrating it, too. He’d already tried to do it himself, but he didn’t like the sound of his own voice. I thought, ‘Sure, I’ll try it,’ and I did—on a handheld Sony camera. The mic was terrible! The first chapter really wasn’t good. Terrible, really. So bad I told Jared he should look for someone else. But, we kept going, and now we’re on episode 24. I’ve gotten a Yeti mic, and I’ve improved production across the board. I think it’s actually pretty decent now, considering there’s pretty much zero budget involved. It’s just two brothers basically enjoying a hobby. It’s fun.”

Incorporating “a little bit of the thousands of people I’ve met over my lifetime” into his characters, Jared shared some of those links in relation to Ryder’s father and his own father. “The main character has a bit of my insecurities buried in him. And his dad’s character has one major quality I took from my dad, who passed away young with early onset Alzheimer’s—suffering in silence. Toughness is both a strength and a weakness. It was my dad’s strength and weakness that made him shoulder the entire burden alone. While the challenges he faced are completely different from Ryder’s dad, there are still parallels.”

In fact, dealing with the reality that their father was getting worse, not better, was the impetus for taking the action to turn Jared’s then-novel into a podcast.

“I did a complete rewrite of the entire thing, and added three or four chapters that were designed specifically to leverage the sound qualities and effects of a podcast,” Jared said.

The act of turning the book into a podcast was also a transformative personal experience for both brothers. “I’ve changed as a writer,” Jared said. I’ve become more succinct. When you’re forced to listen to your work through someone else’s voice for so long, you realize you’re probably a little too verbose. I’m also an attorney by trade, which makes it worse! So, it’s been an evolutionary process. It’s been a good learning experience. And I’m glad I’ve been able to do it with my brother.”

As for Josh: “Remember, when I started, I felt like I sucked. I’d never done anything like it before. I’d never recorded anything. I’d never done an audiobook. I’d never done effects creation or anything like that. But now, I feel like I’ve grown so much as a narrator and as an audio producer. Episode one is not necessarily representative of the capabilities of the story. You have to go to at least episode four or five to get an idea of our vision going forward. Because at first, it was going to be more of a traditional marriage of an audiobook with some effects. Now, it’s blossomed into something so much more that I think we’re both pretty proud of.”

What’s next for Doleo? Perhaps something that resembles more of a traditional audio drama.

Jared speculated, “Maybe I write a script and get some people together to do a live read. Maybe we try and build it out that way for episode one, and see if it’s sustainable. It’s hard to say, with our work schedules and family demands. Josh is laughing at me as I say it! I don’t know if that’s a realistic endeavor, but we’ll see.”

Brush Up! Your Teeth and Your Podcast Niche, That is...