Brothers Josh, Abram, John David, and Jake grew up in Shreveport, Louisiana. The boys’ father, Johnny Booty, worked hard to coach his sons in football, and all four were high school standouts.

Josh recalls, “With dad as our coach, all we knew was ball. I was able to break a national high school football record for passing. My brother Abram was a receiver on my team my senior year. He went to LSU and played receiver, and as a freshman, was also an All-SEC player. My other brother, John David, ended up going to USC and playing for coach Pete Carroll, and for the Trojans with Reggie Bush and all those guys out there on the West Coast. They won two Rose Bowls. He was able to win a couple of bowls and played in the league for the Vikings and the Texans, and then jumped around a little bit in the NFL. We all had a lot of fun with it.”

With so much talent in his family, Josh learned to be competitive at an early age

“I mean, everything was a competition, to be honest with you. Whether it was Thanksgiving-day games in the backyard, or Horse… we were always playing basketball, too. Me and my dad would play my two younger brothers, or me and one of my younger brothers would play my dad and the other brother. We were ALWAYS playing, and kids in the neighborhood were always coming over. Groups of guys constantly playing wiffle ball or touch football in the front yard. In Louisiana, there’s just not much to do besides play ball. At least as an athlete—that’s all I ever thought about doing.”

With sports in his blood, Josh went on to become not only a professional baseball player, but a professional football player, as well. Not many professional athletes can play two sports—think Bo Jackson, Dion Sanders, Brian Jordan, and Michael Jordan—these are the most talented of athletes.

For Josh, the road wasn’t easy.

“Baseball is very difficult, because you play every day. In the minor leagues, there were a lot of long bus rides. I went through the whole minor league system before I made it to the big leagues,” he said.

Not enjoying the minors, Josh wished instead to be throwing passes at LSU. But, with few days off, his choices were limited, and he ended up playing in the MLB.

In fact, he was a back-up catcher for the Marlins when they won the World Series in 97. 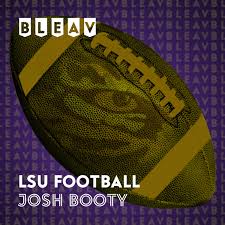 Losing his college eligibility to play baseball, Josh decided to go back to LSU to play football alongside his brother.

Comparing himself to other two-sport athletes, Josh explained how being a quarterback is different. “It’s much different than playing running back, or cover corner. They are the best athletes, yes, but they do not have a playback to memorize. The QB is the CEO.”

Josh also shared some thoughts with me about the legendary leaders he played for—Jim Leland and Nick Saban. “Jim Leyland was more like Pete Carroll. He was a player coach. With Nick Saban, you played out of fear. If you made a mistake, he would come down hard on you.”

Now an entrepreneur living in LA, Josh has also become a member of the media. Having been on Fox in LA and Sirius, he was introduced to Bron Heussenstamm of The BLEAV Podcast Network at USC. They became good friends, and Bron asked Josh to become a host on the network.

Watching LSU win National Title with Heisman Trophy Winner Joe Burrow last year was a highlight of what Josh describes as “an amazing year. We had great guests [on the show] and fantastic interviews.”

Learn more about Josh at Bleav.com/podcast-show/bleav-in-lsu-football-with-josh-booty/.

Huddle Up with Gus

Gus Frerotte is an NFL All Pro who played 15 seasons in the NFL.

Growing up in Ford City, a suburb outside Pittsburgh, PA, Gus played college football at Tulsa.

He went on to play in the NFL for the Washington Redskins, Detroit Lions, Denver Broncos, Cincinnati Bengals, Minnesota Vikings, Miami Dolphins, and St. Louis Rams.

After his career in the NFL, Gus became the head coach of a high school football team. Coaching Ezekiel Elliot of John Burroughs High School, he took the team to back-to-back state championships.

On the show, Gus and long-time friend and sports fan Dave Hager talk with athletes, broadcasters, and coaches about how sports have shaped their lives, including when they fell in love with sports and how sports taught them to overcome adversity and help shape their path to success.

Interviewing the likes of Merril Hodge, James Brown, Joe Theisman, Mike Ditka, and Ryan Fitzpatrick, these co-hosts have a gift for asking thought-provoking questions that get to the guest’s real story.

I give this podcast 5 out of 5 mics, thanks to the high-profile athletes Dave and Gus feature.

You can listen to the show here: www.radio.com/edia/podcast/huddle-up-with-gus.

Original audio documentaries from the makers of the acclaimed 30 for 30 film series, featuring stories from the world of sports and beyond. 30 for 30 offers captivating storytelling for sports fans and general interest listeners alike, going beyond the field to explore how sports, competition, athleticism and adventure affect our lives and world. Sports stories like you’ve never heard before. www.30for30podcasts.comLAS