“Winning covers up a lot of problems.”

It’s a common saying in sports.

The equivalent phrase in podcasting might be: “Authenticity overcomes a little clunkiness.” That is certainly what I found when I discovered Crimeaholics.

The podcast first appeared on my radar last September when it landed at #9 on Podcast Magazine’s Hot 50. Not having heard of the show before then, my interest was really piqued when I saw it ranked at #14 the very next month. I had to hear what co-hosts Mackenzie Durbin and Holly Allen were up to.

In any industry, I always find it fun to see the progression of a business or an individual “getting good,” if you will. In the case of Crimeaholics, if you listen to the early episodes and then some of the latest installments, you witness two hosts slowly but surely figuring it out. Just as importantly, you discover two women who have an empathy for the victims and families of the cases they cover.

I caught up with Holly and Kenzie—two Air-Force wives, Criminal Justice students, and mothers—to talk about what they are up to with Crimeaholics. The first thing I had to ask was how a couple of newbies get their podcast listed on Podcast Magazine’s Hot 50 three months in a row, especially in a crowded category like True Crime?

“We 100% give that credit to our listeners,” answered Kenzie. “Our audience started out as family and friends. And we thought that would be it, since they probably felt obligated to listen.”

After we had a laugh at that honesty, Kenzie explained that a private Facebook group for Crimeaholics proved to be the best way to expand their audience. They started with 45 participants and quickly grew to over 1,600. “Our group voted us onto the Hot 50 without us even knowing,” exclaimed Kenzie gleefully.

They continued to gush over their early group of raving fans. “They were with us from the beginning, with the bad audio and our struggling confidence with it,” admitted Holly. “Our followers now tell us, ‘Your growth is so fun to watch.’ And I think it makes people realize that if two moms going to school who can be ‘hot-mess express’ sometimes can make the Hot 50, other people can do it, too.”

Some new equipment and an increased comfortability with podcasting has certainly increased the professionalism and entertainment value of the show. However, the commitment of the hosts to truly engage with their fans is the primary reason for their increasing success.

“We make it a point to connect with them,” Holly shared. “We discuss cases with them; we joke about our husbands with them; we have become friends, really. I think that’s helped us.” 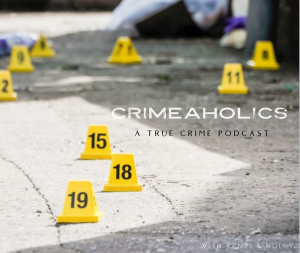 Their empathy helps their popularity, as well. As I was sifting through Crimeaholics episodes, I found Kenzie and Holly to be authentic, but I struggled to find a real differentiator from other shows in the True Crime Category. That is, until I came across their “Missing Mondays” segments.

The feature was born while Holly was researching the case of Suzanne Morphew, a woman who went missing on Mothers’ Day 2020. “I texted Kenzie that I really wanted to cover that case, and it happened to be a Monday,” she explained. “I asked her, ‘What if we did ‘Missing Mondays’ that focus only on missing people?’” Kenzie responded in agreement, and they recorded their very first “Missing Monday” that day.

“We hear ‘Thank you for doing Missing Mondays’ a lot,” Kenzie added. They also now receive requests to cover missing people sometimes just days after they have gone missing.

“For us, missing cases are hard,” Kenzie continued. “Those are the ones that keep us up at night. People don’t disappear into thin air. Somebody out there knows something.”

And that is the service aspect of “Missing Mondays”—one person could hear the podcast, and that could make a difference. “Podcasts are another platform to get information out there,” Holly expounded. “People don’t always have cable, or sit down to watch TV, or read the news. Podcasts are one way to keep up to date on cases, and you never know who’s going to hear it. The ‘Missing Mondays’ are our thing now.”

Their “thing” is also making emotional connections with victims’ families. Holly and Kenzie are very cognizant of being respectful to the loved ones. This was evident in the interview with Misty Watterson, the mother of Allyson Waterson, who has been missing since December 2019. Misty even commented in the episode, which went live on May 27, 2020, how much she appreciated how the hosts covered the case.

“We reach out to the families to make a connection and for information,” Holly added. “Our listeners and participants in the Facebook group like that and enjoy hearing a more in-depth story.”

“It makes the story more credible,” Kenzie opined. “Our listeners are getting information from someone personally involved, and they really enjoy that a lot. For me, bringing these families into my personal life has been one of the biggest blessings I have gained from this.”

“The feedback that we have received from all the families we have communicated with has been overwhelmingly positive,” Holly mentioned. “They have thanked us for ‘being another voice and providing one more platform to share what has happened.’”

“Being in the military, we experience a lot, but I can tell you that interviewing family members is one of the most nerve-wracking experiences of my life,” Kenzie explained. “Even though we have done multiple interviews, I find myself shaking every time. These people have been through absolute hell. What if I say the wrong thing and somehow hurt them at the worst time of their life?”

That commitment to handling their guests with care and to getting the story correct has led to quality content.

Simply put, their authenticity and commitment to service and their guests make Crimeaholics work.

“We are small compared to other true-crime podcasts out there,” Holly continued. “But you never know what might come of a case by our coverage of it.”

It’s true that Crimeaholics  may be one of the lesser-known shows in the category today. However, as a fan of the genre, I am very excited to see where Kenzie and Holly take it in the near future and am appreciative of the service they are providing to a number of families by keeping cases alive in the public.

How Do You Podcast?

UTR: In Machines we Trust