I grew up watching M*A*S*H.

My father was in the Air Force and often away. Even though it was television, in some small way, it allowed me to have the illusion of experiencing my father’s work. M*A*S*H—which stands for Mobile Army Surgical Hospital—features Alan Alda as Captain “Hawkeye” Pierce and is set in South Korea. It spans eleven seasons, resulting in the cast of the show becoming a close-knit family.

When the final episode aired in 1983, it is estimated that 125 million viewers watched.

For baby boomers, beloved actor Alan Alda is a household name. Now 84 years old, Alan has been a director, written several New York Times bestselling books, and currently hosts a successful podcast, Clear and Vivid, with more than 100 episodes published to date. Listening to them, it is easy to fall in love with Alan’s enthusiasm, joy, and infectious laughter.

An avid fan, I was thrilled to have the chance to sit down “with” Alan. My first question? About Alan’s own military experience, of course.

Laughing, Alan explained that he was “sort of” in the military.

“There’s a bit of a myth on the internet that I was a gunnery officer in Korea. I was never a gunnery officer, and I was never in Korea. In fact, I was never out of the country on active duty. I was in the ROTC. And my active duty consisted of six months of training as a first lieutenant, and then another six months having to train again. I don’t know why. They took people who are already trained and then trained us all over again. I did learn things in the Army that I value today, like organizational skills. And as a director, I was filming a revolutionary war battle and had 200 extras charging at each other. I’m thinking with seven cameras, it could take days to shoot. We did it in like two takes.”

How did Alan Alda, actor/director/producer, discover his passion for communication?

The core cast developed a camaraderie, and “Most of the time, we would stay on the set in a circle of chairs just make fun of one another, and to laugh and play games. That closeness we really had in those moments was on the set, but off camera. When we were called to camera, we were able to keep that same energy going, except we did it in terms of the lines of the scene. But there was an awareness of one another. We weren’t acting our own individual parts… we were part of the whole. That’s a very important thing to experience. And you can only learn it by experiencing it—not by being told to do it.”

“As I was interviewing scientists, I realized I was using these techniques to make contact, so that we had a personal relationship. I didn’t just give them questions that would allow them to give little mini-lectures. I asked them questions that came from my own curiosity about, and understanding of, what they were doing. And if I didn’t understand what they were doing, I badgered them until they made me understand.”

The Alan Alda Center for Communicating Science was born out of the lessons learned from Alan’s experience on both M*A*S*H and Scientific American Frontiers. “I realized that, if scientists could be taught to connect like that to an audience, they would be more powerful overall in their communication, because they’d be more personal. So that’s when I helped start the Center for Communicating Science at Stony Brook. We teach improvisation as a way to develop the best message for a particular audience. And so far, we’ve taught over 15,000 scientists and medical professionals around the world.” 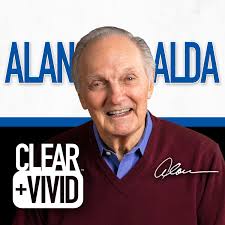 Alan’s podcast, Clear and Vivid, was launched during a meeting with advisors at the Center in 2018. Alan shared, “I’d never thought of it. We started doing it a very short time later. And it’s one of the happiest times I’ve ever had doing something vaguely related to show business. I really love it. I get to talk with real and interesting people.”

Now in its ninth season, Clear and Vivid guests have included Sarah Silverman, Itzhak Perlman, Tina Fey, Katie Couric, Michael J. Fox, Neil deGrasse Tyson, Tom Hanks, Carol Burnett, and more. “I’ve had really iconic people on the show. There have also been fascinating people who you probably haven’t heard of. I always encourage listeners to look for names they don’t recognize, because some of the most touching, interesting, funny stuff happens with those people. We ask them on the show because they’re good talkers, and they have something to say about communication. And it’s really worth hearing them.”

Alan has a unique method of preparing for his guest interviews.

“The podcast is about relating to people. I don’t come into the podcast with a list of questions. I write 10 things I’m curious about on a piece of paper, and I don’t even look at it during the interview. Because as I ask my guests questions I’m genuinely interested in getting answers to, by the end, I find out I’ve covered everything on the paper! Each question I was curious about came up organically in the conversation. Because the worst kind of interview is where somebody says, ‘How’s your family?’ ‘Well, my grandmother died.’ ‘Tell me about your next picture.’ I mean, I’ve been in that situation, right? It doesn’t make you feel great, and there’s a noticeable tone of voice that occurs in the person being interviewed. It’s not that personal. It’s like a commercial.”

Alan’s interviews always end with seven questions, and the fun for Alan is in the guest’s answers.

“It’s really seemed to make people pause. They go, ‘Oh, wait. Let me think,’ you know? And then something comes out that sometimes none of us expect, including the person who says it. It’s fun.”

One of Alan’s most surprising interviews was with Paul McCartney. Alan recounts, “I was so excited that McCartney was coming in. My staff made sure there were two guitars and a piano in the room just in case Paul wanted to sing a song or something. And I said to them, “You can’t do this. You can’t impose on him like that.” And while I was complaining, McCartney walked in the door. He saw the guitar, and in a polite way, he asked, ‘What’s this?’

“I quickly tried to explain that I hadn’t know that was happening—that I regretted having the instruments in the room. And we made contact, and we had a great time. And then, during the podcast, I said, ‘Your melodies are so gorgeous. And they’ve touched billions of people. How do you arrive at a melody? How do you find it?’

“Paul said, ‘Well, I sit at the piano and I plunk down chords. There’s a piano over there. Let me show you what I mean.’ And he goes to the piano and starts playing chords. Unfortunately, the piano hadn’t been tuned in about 18 years. But he didn’t complain, thank goodness. He started writing a melody right on the podcast. And I thought that was an extraordinary moment, because you’re hearing genius at work. And I was so grateful to him. We got along great. We did vocal warmups together. We had so many moments that surprised me and made me really glad to be talking with him. I’m so grateful for all the people who help make that happen. Because I love doing it. I’m a little selfish about doing it, too. It’s probably more for me than for anybody else.”

Alan’s hope for the future is to have his dream guest, Michelle Obama, on the show. “We’ve tried a few times to get her; she’s such a great talker. She’s such a good communicator, and she doesn’t sound like she’s being interviewed. I’d love to have her on, but everybody wants her. So she’s just still not available, but someday!”

Not ready to retire, Alan shared that he has a new podcast coming out this month, Science Clear and Vivid. He’ll interview scientists and hopes that “listeners of the podcast get that same sense of exaltation, hearing what the human mind is capable of understanding… of lifting up the carpet of nature and seeing what’s under. It’s amazing.”

Our conversation ended with me asking Alan what is it that drives him to continue to teach and learn in his eighth decade. His answered like a mage:

“It’s wanting to have fun in the best, most serious way. My friend Wayne Rogers, who’s unfortunately not with us anymore, had a wonderful saying that he kept repeating to me after we were done with the show and getting bombarded with offers to do too many things that we didn’t have time for.

“He would say to me, ‘Remember fun, fun, fun. If you have fun, it’s worth doing. There’s nothing better than to have fun under all circumstances.’”

Unraveling The Mysteries Of The Brain