There are many conflicting theories about how COVID-19 came to be a global threat, but according to Government Affairs Senior Specialist for the National Association of County and City Health Officials (NACCHO) Ian Goldstein, this massive-scale outbreak could have been entirely prevented if public health was properly funded.

“When public health is doing its job, all is quiet,” said Goldstein. “You don’t hear about public health until its not functioning properly. That’s the very mission of NACCHO. We are a non-profit organization aimed to improve the health of communities by strengthening and advocating for health departments before a crisis exists. My role is to elevate and raise the visibility of local health departments at the federal level. Public health is not being funded the way it needs to be, and it hasn’t been funded in that way for a very long time. So, what we’re seeing today is the nation’s reaction to a crisis that was preventable and foreseeable. Now, we’re playing catch-up, and it’s terrifying. That’s why the podcast is so valuable.

Goldstein’s love of hosting the podcast comes from his appreciation of music, the radio, and journalism. He has worked for NACCHO for the past decade. He has taught guest lectures on health policy at American University and Johns Hopkins University. The NACCHO Podcast Series has been recognized as a Top 30 Public Health Podcast in 2020. 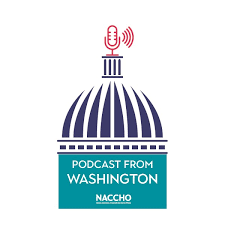 Goldstein has a degree in Journalism from Towson University and a master’s degree in Legal and Ethical Studies from the University of Baltimore. He is also the owner of Brothers Music located in Baltimore City, which opened its doors in 2015.

Goldstein was born in Washington, D.C. and raised in Maryland. He has been married to his wife Jenny for three years, and they have a two-year-old daughter, Judy. In his spare time, he loves to play the guitar. His favorite types of music are rock, indie rock, and alternative. There was a picture of a yellow submarine on his wall as we spoke, which he says is an homage to his favorite band, The Beatles.

Even though Goldstein is Caucasian, he has always loved and been fascinated by Black History and racial justice. His music store is in a predominantly Black neighborhood in Baltimore. In addition, he recalls growing up and seeing books like Roots on the shelf, which he read and loved. He next delved into another Alex Haley book, The Autobiography of Malcolm X and The New Jim Crow by Michelle Alexander which discusses mass incarceration. “I have always had a strong sense for social justice and health equity. I love to talk about these issues. Sometimes, it makes people uncomfortable, but I think that’s a good thing,” he said.

The best professional advice he’s ever gotten was from a former colleague who said, ”If you’re not at the table, you’re on the menu.” He shared another piece of funny advice he received from his dad about gambling: “Never bet on anything that talks.”

“I take that to mean that if it can talk, it can be manipulated, so beware,” he said.

Goldstein is inspired by his wife and daughter and by all the amazing people working in public health, especially now. Many public health professionals have not taken a day off work since the pandemic began. They routinely work six or seven days a week and more than eight hours a day. These brave men and women need to be saluted for their hard work and dedication.

“My immediate team that I work with gets me fired up every day to advocate and fight for health equity and social justice. We are proud to represent local health departments.”