New patient. Session 1. Female. Mid-twenties. No history of psychological counseling. She was skittish when making her appointment. Condition unknown.

We’ve all heard the stories of businesses that were started in a garage. Apple. Microsoft. Dell. Harley Davidson.

But how about fiction podcasts in a bedroom?

That’s how The Bright Sessions, one of the most influential podcasts in the audio drama space, began.

“November 1 was our five-year anniversary, which is wild, because five years doesn’t sound like a long time. But you know, in fiction podcast age, that makes me practically 100,” said Lauren Shippen, creator of The Bright Sessions.

“I started it entirely on my own. I wanted to make something myself. And I was listening to Welcome to Night Vale all the time, who were such great influences and inspirations for me. So I wrote a couple of scripts and grabbed a couple of actor friends I had, and we just started recording in my Los Angeles bedroom. I edited the first 16 episodes until my wonderful sound designer Mischa Stanton joined me. And then we just kind of kept making it for fun. It was so fulfilling, and it ended up spinning out into a much bigger world and career than I could have ever imagined.”

The Bright Sessions started in 2015, which was also when a number of other influential podcasts, such as Limetown and The Black Tapes, started. “It was a really exciting time for podcasts back then. We came into the scene at a really good time. Really buzzy podcasts had just come out, and we ultimately benefited from releasing around the same time, because people listened to those shows and loved them. They’re fantastic. And, then they were looking for more shows, and there we were.” 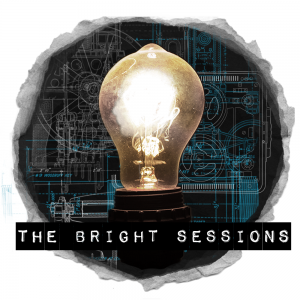 The Bright Sessions is about people with supernatural abilities in therapy. “It’s about them, their journeys, and their process of figuring out how their abilities fit into their life. It was inspired by my love of superhero movies, comics, and sci-fi and my desire to zero in on a more grounded story about what it would actually be like to live with mindreading or extreme empathy or time travel. Initially, I had conceived it as three character portraits plus Dr. Bright’s slow-burn story.”

The first season was just nine episodes, three episodes per character, structured as therapy sessions. Shippen played one of the characters herself, and then she enlisted three other actor friends to join her.

“I had some vague idea where this would go if we did more, but I actually posed it to the actors as an experiment. It was like, ‘I can’t pay you. We’re all doing this for free. And I’m going to make it so you come in and record for two hours. And then I’ll edit it and post it online and we’ll see what happens.’ We had so much fun making that first season that we started talking about where the story could go and where the characters were headed. I met all my original collaborators in acting class, so we were used to doing scenes together, talking about them and unpacking them together.”

Shippen continued writing more and more scripts, and by the end of the second season, she started to understand what the structure of a season and episode should look like.

During the second season, Stanton joined as “sound designer.” “I was the person watching a lot of YouTube tutorials. But because Mischa, whose talents were far, far above mine, could come in and actually sound design what I wrote, I began to expand. I was no longer writing for the limited abilities I had within sound design.

“I look back on making The Bright Sessions with such fondness because it was a really lovely opportunity to get to build something as we went. I didn’t necessarily always know where the story was going until maybe three episodes into a season. I was aware of where it was headed, but I could take so many detours, because we could do whatever we wanted. There were no deadlines. Of course, the flip side was none of us were really paid much for any of it. But it was really nice to have that flexibility and the freedom to just find the story, especially since it was my first time ever writing scripts.”

The Bright Sessions has grown to five seasons with two spinoffs and two Young Adult fiction books, The Infinite Noise and A Neon Darkness.

In addition to how groundbreaking The Bright Sessions has been, Shippen herself has also played a pivotal role in shaping the audio drama industry. She worked on Passenger List with John Dryden, the Marvels podcast, and the recently released The College Tapes.

“I’ve been really fortunate to get in on the ground floor, and then, you know, help build the industry up,” Shippen said.

UTR: Clever - A Podcast about Design