If you’ve never listened to a government podcast before, now is the time to rethink your stance. Here are a few reasons why:

The Sharon Says So podcast launched on July 19, 2021 and quickly reached:

So, who is Sharon and why should you listen to her?

Sharon McMahon is a longtime government and law teacher. Last year, her Instagram account (@sharonsaysso) went viral after she released short videos explaining non-partisan and fact-based aspects of the 2020 election.

Her goal? To help people understand the issues, so they could make an informed decision.

She now has over 667K followers.

“The overarching theme of everything I do is to educate and entertain. Rarely is it just one or the other. I love helping people learn something new while having fun,” she said.

The popularity and success of the podcast is in large part due to McMahon’s infectious personality and her keen ability to break down government terminology in plain, accessible language the average person can understand.

“People are tired of being told what to think, so I provide them with information they can consider while making their own educated opinion. I’ve found that people really respond to that, because it’s hard to have an educated opinion, if you don’t have any education on the topic. So, I think people really enjoy learning when they feel smart and are taken seriously rather than being coddled and told to think a certain way.”

One thing podcasters can learn from McMahon’s success is that she spent time growing her audience before she launched her podcast. “I had a large, engaged audience in advance of the release of my podcast; they weren’t fake followers. They were ready and waiting to listen. I also reached out to other influencers on social media and asked if they would help me promote the podcast, thereby casting a wider net,” she explained.

Her core listening audience is college-educated women between the ages of 25 and 45 living in the United States. One of her favorite things to talk about, and what her core audience resonates with, are untold stories about government and political history. 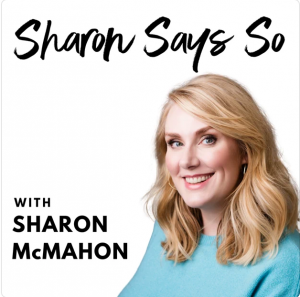 “These stories create what I like to refer to as ‘brain-tingle lightbulb moments.’ They occur when my listeners are like, ‘I did not know that!’ It’s that excitement you feel when you learn something really juicy and immediately want to tell your friends about it. I love delivering those kinds of moments to my audience.”

McMahon believes that misinformation is a threat to democracy, and that’s what she aims to combat through her podcast.

“If you are misinformed about how the system works, you cannot work to change it, and you cannot protect your own rights. In essence, you don’t have a clear understanding of what’s actually going on. So, we all need to know how the system works. You’ll often hear how journalists shine light in the darkness. Well, that’s what I’m doing, too. I’m turning on the lights in the room to find out what’s really going on. I really view my role as a teacher—it’s my job to shine light on the dark corners and make sense of them.”

A fun fact: McMahon became interested in government when she was just 12 years old. Growing up in Minnesota, she had a paper route, and would walk from house-to-house delivering the papers. Along the way, she’d read the stories.

“I had to read the papers in such a way that the recipient wouldn’t be able to tell. I had to carefully fold the paper back and then pick up reading in the same spot with the next paper I had to deliver. Later, as a teenager, when I got into high school, I became more interested in government and used my babysitting money to buy a Newsweek subscription. It just snowballed from there.”

Two dream guests McMahon would love to have on her show are Michelle Obama and George W. Bush. “They would be a dream combination to interview, because they are actually really good friends. I love the idea that these two people from two totally different backgrounds can respect each other and enjoy each other’s company.”

In her downtime, McMahon is an avid reader. “I’ll be watching the TV with my husband and have a book in my hands reading simultaneously. My husband is like, “Are you even paying attention to this?’”

One book that has made a profound impact on McMahon is by her good friend Adam Grant.

“Think Again is a must-read. What I think is dangerous is forming an opinion and never revisiting it again. Like, some people never move off of a position, no matter how much new evidence is presented to them. Thinking again is something that too few people are willing to do, but it’s absolutely crucial if we want to have the best government, public policy, taxes, laws, relationships… anything, really. We have to be willing to rethink how we are doing things. And maybe the reexamination will lead us to the same conclusion, but the process of reexamination is incredibly important and valuable.”

The best piece of advice McMahon has gotten has been, “You are meant to attract the right people to you and repel the wrong people away from you,” she said. “Having the goal of everyone liking you is the most futile, worthless goal you can have, because it means you are not doing anything of substance. Some people will not agree with you, like your methods, or anything you have to say. Once you let go of the idea that everyone has to like you, it’s incredibly freeing.”

McMahon has been married for 21 years and has four children. She is addicted to learning.

“There is a lot of information acquisition that takes place in my brain. It’s a little like being a marathon runner, where you have to continually consume more calories because your brain is just hungry for it. So I’m always asking, ‘What can I learn?’ It’s exhausting, because like my husband said, I can’t just sit and watch TV. I have to read, too, because I’m always in the act of learning. That’s just how it works for me, but I love it.”