Like many young aspiring actors, Monica Padman (of Drop Dead Diva, The Good Place, House of Lies, and CHIPS, to name a few) arrived in L.A. in 2011 with stars in her eyes.

At 24 years old, she dreamed of landing a role on a show similar to Friends—the sitcom she had loved since eighth grade that also inspired her to act.

Little did she know that life would take a different turn, eventually leading her to co-create, co-host, and co-edit one of the most popular podcasts on the planet—Armchair Expert with Dax Shepard.

The “how” can be explained simply: proximity led to opportunity.

Arriving in L.A., friends introduced Monica to Dax’s wife Kristen Bell. Later, Monica auditioned for, and landed, a gig alongside Kristen on House of Lies. The two established a level of trust, and Monica became Dax and Kristen’s babysitter.

“I’m pretty neurotic,” Monica admitted. “So I was a little scared of losing my job all the time. I remember one time, I was picking up one of the kids from preschool, and I had the other, a baby, with me. It was one of those chaotic moments every parent knows—things falling, baby screaming—and I’m trying to cross the street. There was this woman, a parent at the school, in a car. I honestly can’t remember the details, but essentially, I rolled my eyes at her. And she rolled the window down and scolded me! I remember her asking who I was, and I was like, ‘Oh no. I’m going to get fired for this. This mom is going to tell Kristen and Dax that I rolled my eyes, and I’m going to get fired.’ So later, out of pure guilt, I told them. I told them I couldn’t help it; it just happened. They just laughed really hard. And then I knew that there was some safety there. We’d built something a little different, and that felt really good.”

“It was never like, ‘Oh, I’m now moving into the world of personal assisting or babysitting.’ That was never a thing. It just all happened so organically. I was still there as an auditioning actress, and I made that really clear to Dax and Kristen at the beginning. They even reassured me that someone would always be available to cover for me when I went to auditions, which at the time, was frequent. I was booking commercials and doing a lot in that realm. Babysitting was my day job.

“Then, it turned into a much different relationship—this real, connective family unit. But my goal of acting and working in the industry never changed—all these other things were basically on the way to that aspiration. Then came the point when I had to realize that the goal had changed. Things are different now—my priorities have shifted.”

In reference to Monica’s blooming friendship with Dax and Kristen, she continued:

“We built a rapport. You can’t fake that kind of connection. We created this solid foundation that morphed into something else entirely. We would have these real, in-depth conversations at night about various issues and topics, and we just related to one another. You really have to find your people—especially out here in L.A. It’s so hard, but you just have to… because otherwise, you can really just drown.” 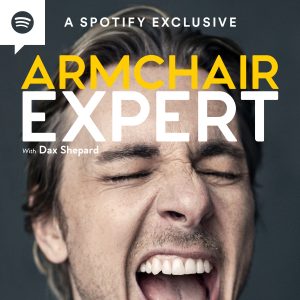 It was following these nightly conversations and debates that Dax became interested in starting his own podcast.

Having appeared on Marc Maron’s and Sam Jones’s podcasts, he was already hooked—not only were they incredible interviewers, but Dax appreciated the long-form structure of podcasting.

“He really loved that type of conversation—the ability to get deep. The absence of sound bites. And I was just sitting there, all casual, like, ‘Yeah, I can help with that. Let’s do it. Let’s try.’ We had a concept, but didn’t really know what anything was going to be.”

Soon after, Dax landed a guest appearance on Michael Rosenbaum’s podcast, where he met Rob, who was the sound engineer for the show. “We brought him on,” Monica said, “and just dove in, creating the artwork and all the necessary pieces.”

That was in 2018—the same year Apple named Armchair Expert among its top 15 podcasts of the year—and it quickly became one of the most downloaded.

Over 20 million listeners—or “Armcherries,” as fans are lovingly referred to.

And now, just three years after launch, Armchair Expert is a Spotify exclusive. Though terms of the acquisition have not been disclosed, some have speculated that the contract is worth well north of $25,000,000.

Dax and Monica interview artists, celebrities, and world leaders to “celebrate the messiness of being human.” The show’s promise is to “celebrate the challenges and setbacks that lead to growth and betterment,” resulting in vulnerable conversations with some of the most intriguing names in the world: the Duke of Sussex Harry Mountbatten-Windsor, President Barack Obama, Bill Gates, Brené Brown, and many others.

The show is, without a doubt, a grand slam in the world of audio. To what do they attribute their success?

Primarily… that nothing was forced.

“There was no pressure,” she shared. “There was no illusion of success in this realm. We didn’t even know what it meant to be successful at podcasting. There was no meter stick. We set out to do it for fun. That was literally the goal. I don’t know that I’ve ever—EVER—in my life truly done anything or started anything just because it was fun.”

And secondarily, they were strategic with their guest-booking. Their very first guest was, naturally, Dax’s wife Kristen. People around the world are intrigued by this relationship, so it seemed a natural choice. And it didn’t disappoint:

“Theirs is a very honest portrayal of who they are—they’re not trying to present anything that isn’t real. People like that—they gravitate toward authenticity, and Dax and Kristen exude it. That first episode drew a large, loyal audience. And then our second and third episodes were Ashton Kutcher and Joy Bryant—again, connected guests. It was a little bit strategic in the way of bringing on people who were already fans of Dax.”

And there are many—on Twitter alone, Dax and Kristen amass several million followers. Plus, Dax appeared on Ellen to promote the launch of the podcast —a privilege Monica called “special and different.” From there, word-of-mouth brought the show a new level of popularity.

Despite Dax and Monica initially joking about naming the show The Millionth Podcast as a nod to the saturated space, they have, without a doubt, set it apart from the competition:

“When we first started, though, I was really hung up on a lot of stuff,” Monica admitted. “We had Judd Apatow on, and I was still in the mindset of someone who wants to be in a Judd movie! So, I’m sitting next to him and in my head, I’m going, ‘I need to talk! I need to be impressive.’ And of course, no one’s impressive when they want to be impressive. So that was a big hindrance. But I just don’t have that anymore. And I think that is largely thanks to three things: the confidence the show has brought me, our success, and our gratitude. I really love being part of the podcast culture.”

To succeed in the podcasting space, Monica advises podcasters to remain “malleable.” Having moved to Spotify, for example, she explained how she and Dax are constantly revisiting and re-evaluating the breakdown of the show in addition to what’s happening at every moment.

For Monica, perhaps one of the greatest unforeseen positive effects of podcasting has been making her parents proud. As Indian immigrants, Monica shared, they put their lives on the line, sacrificing so much to come to America so their children could have safe paths moving forward in their lives:

“The fact that I’m now able to give them some element of security is the absolute best gift of all. They both came to one of our in-person shows to surprise me. And as they were getting on the plane, my dad said, ‘We’re really proud of what you’re doing.’ You think you grow out of wanting to hear that, right? But you don’t. It was really special.”

Together, Monica and Dax capture special, unique moments and human truths. Their conversations are intimate and honest as they explore their guests’ stories and share them with their listeners worldwide… perhaps no longer just for fun, but for the betterment of all.

At the end of the day, each and every one of us can relate to the messiness of being human… and the truths these discussions lead us to.

The Conundrum of Age