The Moms Don’t Have Time to Read Books podcast originally started because a friend suggested that host Zibby Owens turn one of her book ideas into a podcast. At the time, Zibby didn’t really know anything about podcasts, but as she started learning more, she realized what she wanted to do with one—to give authors more of a platform to spread the word about their books—and to share content with everybody who’s too busy to necessarily read them. That became Zibby’s mission… a new way to reach really busy people with information she thought would be helpful for them emotionally.

Her original idea for the show was to take snippets of books that she would normally send along to friends and read them on the show. But after discovering that was illegal, she thought interviewing authors would be the best course to take. The only (slight) problem? Zibby didn’t know very many authors.

“I knew two authors. I figured I could start with them. So, I just tried it. I sat in my bedroom, and I downloaded the easiest app I could find. I didn’t even tell anybody I was doing it in case it turned out to be a massive failure. I was just experimenting to see if I liked it. I did my first interview with a friend of mine, who’s also an author. And I was like, this is amazing. I love this! I haven’t stopped since.”

For Zibby, the best part of hosting the podcast is the conversation. It’s the fact that for 30 minutes at a time, she doesn’t check the phone, get distracted, or even deal with her kids. She’s only focused on learning about others and figuring out what makes them tick, who they are, why they wrote the books, what is in their books that is so important, their motivations, their history, what they get out of writing, and any advice they have.

“It’s like having a private tutor or something. Every conversation is almost like therapy, except I just get to listen. I love learning about people, especially people who I already inherently admire because they’ve published books.”

Zibby herself is an author, having published her first essay in Seventeen Magazine when she was just 16 years old—one she’d written at 14. She’s been writing and publishing essays ever since, along with a couple of novels and a non-fiction book. She’s also been published as a ghostwriter.

Professionally, her day jobs have been in marketing and brand management, so her writing is really a side gig. Doing the podcast, though, has improved her writing a lot, and it’s also landed her connections in the publishing world that may lead to bigger deals in the future.

A mom with four kids of her own, when Zibby first started the show, she was questioned about her decision to focus on moms—why eliminate so many people who aren’t moms? 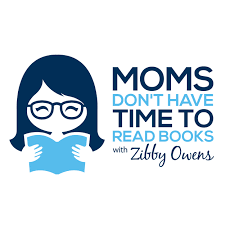 “I’m not trying to eliminate them. This is just my own point of view at this stage in my life. It’s the lens through which I’m reading books and seeing the world. It’s not the only lens. I’m also a daughter, a wife, a student, a Psychology major… I’m all these things, and my own person. But the mom perspective is just where I’m coming from. And I know moms in particular. Like me, they don’t have that much time. We are in the same boat.”

It’s not that Zibby’s content isn’t great for anybody. She covers all sorts of topics. She just feels good servicing an audience of moms during her present stage of life.

A fun fact about Moms Don’t Have Time To Read Books: one of Zibby’s earliest guests was the tennis star Andre Agassi, author of the book OPEN, who she landed for the show through a connection of her husband’s in the tennis world.

“He was so nice. He said, ‘Sure, I’ll do a podcast.’ And I was like, ‘You’re kidding.’ So that was one of my earliest episodes. And I think having him on early gave my podcast a sense of legitimacy. It made people take it more seriously. And it helped me get future guests. From there, it just grew and grew.”

Most of the success of the show has come from word-of-mouth marketing. Living in New York and knowing a ton of people has helped her to land some great guests, too. Of course the fact that the Big Apple is the heart of the traditional publishing industry means that book publicists are now pitching her and emailing her, too, as well as sending books on a regular basis to promote the authors they represent. In fact, this happens so much, Zibby has a pile of books delivered to her every week.

In terms of the listening audience, she’s heard from a number of people that the show has gotten them into reading again or inspired them to pursue their own passions. People are coming to her because they see her as someone who has found a way to do the things she loves, whether that’s writing her own books or interviewing famous authors, while simultaneously being a full-time mom. Because she’s focused on really caring about the authors she’s interviewing and expressing her own emotions about books and writing, listeners are inspired to find something they are equally passionate about.

One spinoff of the podcast is that Zibby is now doing a lot of book events and book fairs where she gets connected with the listeners. She’s also very active through Instagram and welcomes emails from fans who are excited about reading again. Often, they share the books they have on their bedside table or ask Zibby directly for reading suggestions.

She’s also a regular attendee of Podcast Movement and really appreciates how industry colleagues are so willing to help each other out.

“I’ve had many podcasts as sponsors on my podcast, and then, I’ve gone on their podcast. It’s just a really nice industry. Nobody feels like they have to clamor for their own territory.

“I’ve met the most amazing people. I have connected with people, far and wide, all different types of people. I’ve learned so much from them about so many different things. And I just feel this greater sense of connection with everybody.”

Under The Radar: The Daily Mastery Podcast

Under The Radar: Green Beauty Conversations