As children, we grow up hearing stories about heroes. Whether in our own family lineage, in magazines, or on the television screen, every generation has been inspired by heroes.

Some of those heroes dedicate their lives and passion to sports—like Olympic gold medalist Laura Wilkinson.

Born in Houston, Texas, Laura fell in love with gymnastics after seeing Mary Lou Retton achieve incredible feats. “I was about 13 when I saw Mary Lou Retton do that perfect 10 pole vault. I realized I was not going to be at that level in gymnastics,” Laura recalled.

So, Laura began exploring other sports, and after much trial and error, found her way to the water. Her experience in gymnastics helped her advance quickly as a swimmer. However, she was kicked off her high school swim team nine months later for being “too old.”

The next year, Laura made the U.S. National Team, won her first U.S. National title, and earned a bronze medal at the World Cup. Talk about proving the doubters and naysayers wrong!

At the age of 22, Laura became the only American diver to ever win a gold medal at the renowned Goodwill Games. The following year, in 1999, she won her second NCAA Division 1 title, and decided to leave her college scholarship behind to return home and pursue her Olympic dream.

Achieve it, she did. In the Sydney 2000 Olympics, Laura jumped from eighth place over five final-round dives to become the first U.S. woman in 36 years to win platform gold—with a shattered foot. 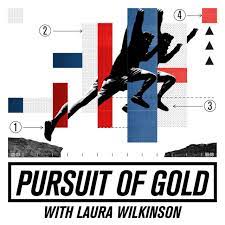 From there, Laura decided it was time to follow another dream—that of becoming a mom. While raising four children, she also remained part of the diving sport from 2012 through 2016 by serving as NBC Olympic commentary correspondence.

It was in 2016 that Laura returned to the water. “For an hour every day, I just started playing in the pool for some mommy time,” she said. And it was as if she had never left her water “home.” With the support of her coach, she placed second at nationals in 2017.

Her comeback continued for a year, until degenerating discs required surgery to avoid looming risks.

Despite the obstacles Laura has encountered—from the high school swim team debacle to her physical injuries—nothing has stopped her. Her strong mindset after surgery had her back in the pool training by spring of 2019.

Due to the pandemic, Laura has had to get creative while everything is on hold. The upside—even her kids have been bitten by the athletic bug!

“I borrowed some mats from our gym,” Laura said. “I’d be up in the game room trying to do my little (zoom) workout with the Olympic diving team, and my kids would be crawling all over me and trying to jump into the workout.” Her oldest daughter (nine) is following closely in her mom’s path, having taken up diving a few years ago, and Laura’s children continue to be hugely supportive of her and her career.

Despite the ongoing restrictions of the pandemic, Laura remains busy and active, explaining that she “like[s] to pave new roads.” She has a book coming out this summer titled Life Lessons Learned from the 10 Meter, and she has launched her very own podcast!

It’s called, Pursuit of Gold, and in it, Laura sits down with people throughout the Olympian spectrum to help the next generation of (and existing) athletes.

UTR: All the Smoke

UTR: The Art of Wrestling