“As an Officer and platoon leader in Iraq, I was responsible for others living, dying, or getting severely injured. I grew up real quick at 23 years old.”

John Lee Dumas has always taken great pride in forging his own path. He is largely recognized as the creator of the daily podcast, a lifestyle pioneer who singlehandedly led more entrepreneurs to Puerto Rico than almost anyone else, the originator of fully transparent ‘monthly income reports’ (more on this in a moment), and unparalleled mentor to tens of thousands of podcasters via Podcasters’ Paradise.

Given the impact he’s had on the industry, it’s difficult to fathom this Podcast Hall of Famer nearly bailed on launching his award-winning show, Entrepreneurs On Fire, because he was nervous no one would listen. 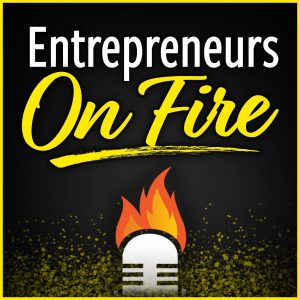 Fortunately, JLD isn’t one to fear much in his life—especially after serving eight years in the U.S. Army.

It is, perhaps, this lack of fear that extended to his becoming an innovator and developing previously underutilized methods of monetizing his podcast. One of his early initiatives? Having his assistant search Amazon and email the author of every soon-to-be-released business book about sponsoring his show.

“I had her reach out and let the authors know that her boss, John Lee Dumas, has a podcast called Entrepreneurs On Fire and the audience is an ideal fit for their teachings,” he shared. “The offer was simple—sponsor an episode for $300, and we’d give them a one-minute ad at the beginning of the show to pitch their book.”

One of his first sponsors? Yours truly, in conjunction with my book Internet Prophets: The World’s Leading Experts Reveal How to Profit Online. The return on our investment was substantial.

Today, JLD would be hard-pressed to offer one minute of airtime for $300, as the average sponsorship cost is nearly $3,000 per episode. And, while ad revenue is substantial, it represents just a small fraction of his company’s annual haul.

With an average Apple podcast rating of 4.8, the show features interviews with more than 2,000 of the world’s most successful entrepreneurs, including Tony Robbins, Seth Godin, Gary Vaynerchuk, Barbara Corcoran, Tim Ferriss, and many more.

Clearly, JLD has mastered the game of podcasting.

Of course, it wasn’t always this way. To understand how he arrived at this point, let’s go back in time.

John grew up in a small town in Maine with a population of just over 2,000. His father was the ‘Atticus Finch’ of the community—a lawyer who hung out his shingle and, over his 35-year career, taught his son what it means to be an entrepreneur… and a father.

“I loved how my dad was always present,” he recalled. “I would get home from school and ask him if we could do something, and he’d say, ‘Let me move a couple of things around; I’ll be right there.’ He would always adjust his schedule so he never missed one of my games. He worked really hard, but on his terms. I grew up seeing that and understanding the value and freedom being an entrepreneur could provide.”

JLD also credits his father with instilling in him an appreciation for transparency around money. While many parents hide their finances from their children, his dad showed him everything—monthly income reports, expenditures, revenue… he was “an open book about money,” John said. “I wasn’t going to be one of the high percentage of kids who graduated high school knowing trigonometry, but not knowing how to balance a checkbook. I learned those skills from my dad. Knowing why he had to let a secretary go after a bad month… things like that… it was very eye-opening.”

[Following in these footsteps of transparency, JLD’s company does what few private companies do… each month, they release a detailed income report—complete with down-to-the-penny numbers showing the exact amount of gross revenue, expenses, and net income, displayed in clear sight at the top of their home page.]

After high school, John knew he wanted to go to college—but not just any college. He had his eye on a prestigious, private Catholic school in Rhode Island that would cost nearly $50,000 per year to attend. Never one to give up on something he desired, he pursued a ROTC scholarship, knowing that the Army would cover every expense.

Not surprisingly, he was awarded the scholarship… plus $75 of “pocket money” per week. He secured every dollar he needed to go to the school of his choice… and then some.

He graduated debt-free and spent the next eight years as an Officer in the U.S. Army. This experience had a “massive” effect on his success as an entrepreneur.

For one, it taught him discipline.

“Discipline is not something I had going into college. It was something I had to implement being an ROTC cadet. Then, when I became an officer and was sent to Iraq for 13 months as a platoon leader, it was really instilled in me. I was in charge of four tanks and 16 men for 13 months during a war. Without discipline, you’re either going to die, or you’re going to be responsible for someone losing his life or getting severely injured. I grew up real quick at 23 years old.”

That discipline carried over into the rest of his life as well. Quoting his commanding officer at the time, he said:

“‘Discipline is defined as ‘being a disciple to a plan of action.’ So, create a plan of action and then be a disciple to execute that plan. And remember, a good plan now is better than a great plan later.’ That’s one huge lesson the Army taught me. You do the best you can in the moment and execute upon that. Because if you wait to come up with a perfect plan, the bullets are flying, the bombs are dropping, and you might not live to execute that plan. So, you must make it happen now with the information you have. That’s the mentality I apply to entrepreneurship, too.”

After the heartbreaking loss of four of his platoon members, Captain Dumas left the Army in 2010. Writing letters to the families of those who made the ultimate sacrifice was “heartbreaking,” he said, and taught him another invaluable lesson:

“I’m able to put things in perspective. No matter how bad things are, I think, ‘You’re not getting shot at. You’re not in danger. You’re not in a war right now, so things could be much, much worse.’ It’s easy to find happiness when you consider life from this perspective. I don’t let small things ruin how I feel overall.”

He went to law school briefly after leaving the military, then into corporate finance and, ultimately, into commercial real estate. But, the pull toward entrepreneurship and the freedom it has the potential to provide was never far from his mind.

It was during this time that he became “a massive fan” of podcasting. When his neighbor heard him complaining about having to listen to sports talk radio about the San Diego Padres, she said, “Why don’t you listen to podcasts?” She quickly showed JLD how to access them with a couple of clicks. He was immediately hooked.

“I thought, ‘Oh my God… I can literally choose what I want to listen to whenever I want!’ It opened up a whole new world for me,” he said. “And I’ve loved the medium ever since. Even then, I knew it was going to explode; how could it not? It’s free, on-demand, targeted content. And you can capture people’s attention in a very focused way. I knew I had to get in on it.”

That’s exactly what John did.

“For two years, I consumed podcasts every single day. I had them playing in the background no matter what I was doing. And then, the lightbulb went on. I saw a huge void—why wasn’t there a daily podcast featuring interviews with successful entrepreneurs? And, just like that, the idea for Entrepreneurs On Fire was born.”

Over the past seven years, his company has generated in excess of $16M in revenue while consistently netting more than seven figures each of those years. Quite a far cry from his original definition of success—“being able to pay the bills.”

After holding court on the top of the mountain for far longer than he ever could have imagined, his view of success is meaningfully different today.

“Being ‘successful’ now boils down to one word,” he said. “Freedom.”

That freedom includes living in Puerto Rico in his dream home, traveling the world with his long-time partner Kate, and having the emotional and financial security that goes hand in hand with the substantial wealth that makes this enviable lifestyle possible.

He absolutely deserves to enjoy the fruits of his labor—he has worked tirelessly for it.

With all that JLD has achieved in his 40 years on this planet, if you’re wondering if there’s anything more for him to accomplish, the answer is unequivocally “yes.”

“I want to have an even bigger impact on this world. If there’s an earthquake here in Puerto Rico, which there are, I’d love to have the means to swoop in and write a $10 million check and just say, ‘Let’s take care of this situation now.’ I’m not quite there yet, but that’s something I’d love to attain.”

Based on his track record of success, it seems inevitable that he’ll light the fire needed to turn this vision into reality.

Podcast Magazine® is Heading to Las Vegas for #NABShow 2022

The Effect of an Absent Father: From Oprah’s Life Class to a Podcast