Have you ever wondered if it’s possible to fool the Tooth Fairy? Okay, maybe you haven’t, but your kids might. They’ll find that answer and more on the new podcast, Best Whatever Ever!

Ira Singerman and his adorable “podcast bosses,” son Spencer and daughter Scarlett, talk about a new “whatever” in every episode of their show. What’s a “whatever”? It’s whatever kids find silly or super important… or “super silly important,” and it serves as inspiration for each fun-filled, silly, original story.

Kids of all ages, and the child in all of us, will be fascinated with whimsical topics like “Where do giant monsters poop?” “What happens when you break a pinky promise?” “Are unicorns real?” and “What’s the coolest superpower?”

What a magical, story-based podcast this is! I love this entertaining format.

As was the case with many other new podcasters, the impetus for Ira’s creating a podcast came during the pandemic.

“Just a couple weeks before everywhere was locked down, we were driving and playing a game of ‘Who Would You Rather Be?’ My daughter posed the question, ‘Who would you rather be—a giant robot or a giant monster?’ A whole family debate ensued. We thought it was fun, and as I was driving, a thought occurred to me: ‘What if there was a giant monster crossing the freeway?’ My imagination took that thought further: ‘What if monsters lived in our world?’ I accessed my ‘kid logic brain,’ and an idea popped into my mind: ‘Where would a giant monster poop?”

“When I got home, I put all that down on paper, because I thought it could make a nice picture book. I wrote it as a manuscript and actually got positive feedback from friends in the industry. A week later, it occurred to me that I could take what I’ve learned over the years and from other podcasts and try it out as an audio story. I enjoyed the process, and I liked how it came out.” 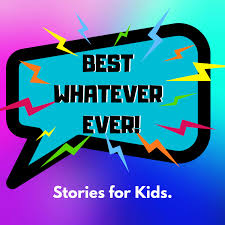 Ira started to write more stories and record them, and although he was happy with the outcome, he was very hesitant to launch them, because he suffered big time from imposter syndrome. But 10-year-old Spencer kept asking, “Dad, when are you going to launch the podcast?”

That was the push he needed. He found the confidence and courage to share his stories publicly because he saw an opportunity to have a “dad moment,” of sorts. “I wanted to show my son that it is possible to go from the conception of an idea to execution to actually exposing your work to the world. I looked at it as a life lesson, a teachable moment, showing him how to see something through to the end. This was the kind of behavior I wanted to model.

“I also came to see it as a vehicle for personal and professional growth as I learned from my mistakes and tried to make the show better while simply enjoying the process and staying consistent and disciplined. I especially love the creative aspect of developing the characters and telling the stories.”

The effort LA-based Ira puts into the show is evident. The sound quality is great, and as a host, Ira is likable and smooth in his delivery. He’s a true professional in every way and incredibly animated. It’s hard to believe he has no aspirations to do voice acting, and even more so that he was once uncomfortable with the sound of his voice.

He added, “I’m writing, editing, mixing, doing everything, which is a departure from my day job where I work with teams and expert editors and artists. I help keep those pieces moving, but I’m not the one executing at every stage. This podcast is all on me.”

However, working in the kids’ entertainment world for 13 years has given him insight into their tried-and-true interests, and he tries to tell stories around them.

For the podcast, he asks himself, “What kind of stories can I tell that reflect a kid’s experience? How do I inhabit a kid’s world?” He then tells tales that reflect the answers to those questions.

Ira is very deliberate in his approach to the content for Best Whatever Ever. “I want to make sure I’m offering something new. For example, there are so many unicorn stories out there in other kids’ media, so I want to make sure there’s something clever about the stories on our show. I’ll usually think of an idea and discuss it with the kids and my wife, who is also very creative. We’ll brainstorm together, and sometimes, my kids will just say that one thing that sparks the genesis of a story. I’ll latch onto that—the story ultimately grows from those seeds of ideas.”

Ira revealed that sometimes, Spencer and Scarlett might say, “Dad, don’t use that!” but he has found those ideas or segments to often be the best parts. He said, “The goal is trying to capture the innocence that becomes apparent when they say something unintentionally funny… some malapropism.”

What’s next for the Best Whatever Ever? Ira explained, “In my day job, I tend to think very strategically about storytelling and new ideas for shows. I don’t just think about a series; I think about the 360-degree approach, and whether the content lends itself to publishing and so on. That’s part of what I do as a professional, so I can’t help but bring that type of mindset into our podcast. I tend to wonder, ‘How can I tell this story in a way that can spawn storytelling on other platforms? In the short term, is there an opportunity for publishing? In the long term, how can this turn into other things?’ Entertaining kids is first and foremost. The second consideration is, ‘How can I nurture it, so it can grow into something meaningful and valuable?’”

Ira added, “Whatever the focus is of any podcast, it has to come from a place of passion and authenticity.” He is intentional about staying prolific and consistent, and you can bet your bottom dollar there’ll be a new episode of the Best Whatever Ever every week. Tune in to be totally entertained!

Under The Radar: Me to We Talk Podcast