“Welcome, dear listeners, welcome to the Vault of Horror! I’m so glad for the company. So few dare to make their way down here… they just don’t have the guts!”

Who could ever forget descending down into the depths to come face-to-face with the grinning skull of the Crypt Keeper as he invites you to watch a tale of horror, mayhem, and gore?

Oh, wait. That was HBO’s Tales from the Crypt.

This, my friends, is Vault of Horror, a brand-new audio drama produced by Pocket Universe Productions and inspired by the 1950s comic book series by the same name published by EC Comics.

And yes, EC Comics created both Tales from the Crypt and Vault of Horror, along with a third called Haunt of Fear. All three featured the same trademark creepy “campiness” where the bad guy always comes to a really gruesome ending.

“EC Comics is legendary in the world of comic book publishing as it was one of the first comic book publishing companies to produce high-quality work in genres that weren’t in the superhero vein, like crime, war, and horror. EC Comics truly challenged conventional norms of the time,” cofounder of Pocket Universe Productions and one of the producers and adapters of The Vault of Horror. “It was no wonder they made a lot of enemies very quickly.”

In fact, it was partly in reaction to EC Comics that the comic book industry created the Comics Code Authority, which essentially shut down EC Comics in 1955. “So-called ‘moral crusaders’ and opportunistic politicians alike essentially jerry-rigged a really rickety link between comic books and juvenile delinquency that resulted in decades of comic censorship. EC’s comics line ended, but thankfully, they still had MAD Magazine, which could operate outside of the rules of the CCA.”

It was Bill Dufris, another producer and executive director of the podcast, who was the driving force behind bringing Vault of Horror to life as a podcast.

Bill, who passed from cancer earlier in 2020, was a legendary force in audio drama and the audiobook industry. Having worked in some aspect on over a thousand projects over the years, including audiobooks, animation, foreign language tapes, audio dramas, etc.

He did everything from voicing Bob the Builder to directing the X Files audio dramas and narrating hundreds of audio books.

“What most people don’t know is that Bill was a big horror fanatic. He grew up in Maine, which is also the home of Stephen King. Horror had a very, very special place in his heart because of his love of Stephen King. So, when he discovered the Tales from the Crypt TV show, he wanted to do something with EC Comics. And we had actually approached them back in 2007, but things fell apart. Then, in 2017, he told me he had been having trouble swallowing. One night, he gives me a call and says, ‘It’s cancer.’ It was stage 3 esophageal cancer. He had surgery to remove it and was cancer-free for three years. During that time, he put together a bucket list of everything he wanted to do, and this podcast was on the list. We went back to EC and thankfully, this time we were able to work out a deal.” 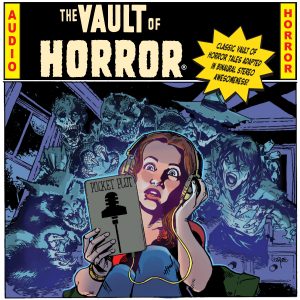 To bring Vault of Horror podcast to life, it was important to keep the balance of creepiness with “campiness.” First, they had to tackle the stories themselves. As they were written in the 50s, they were pretty dated. So, all the stories were carefully updated to fit more with modern times while keeping the spirit of the original books intact.

To capture the “goriness,” they turned to audio.

“Certainly, the most significant part of the audio production, as well as what brings us the most joy, comes in finding all the ways to let the stories play out as little radio plays from the 50’s with fantastic sound effects,” Jonathan Woodward, one of the partners at Pocket Universe Productions, said. “We wanted to make it a really immersive experience, so when you’re inside your headphones, you’re taken into a little world. For example, in the episode ‘Terror in the Swamp,’ you hear the burbling and gurgling of the swamp creature, which is definitely worth the price of admission… which of course, is free. There are so many different ways you can listen to the gruesome hacking up of a person.”

“Or the sound of acid going into a person’s face. Or the werewolf biting into a neck,” added Axt.

“We want to make sure those sounds are in their full glory. It makes the piece fun while taking some of the tragedy out of the gore,” said Woodward.

Bill was a perfectionist, and he insisted on a high standard of production when recording the episodes. For instance:

“What Bill did, and what we will continue to do, is to block out scenes with actors, and have the actors actually move around the studio using one 3D microphone rather than the traditional audio tactic of staying in front of one mic. This makes it not only more immersive, but more fun, as well. You can really hear the actors getting into it, and it becomes more of a true ensemble piece rather than discrete actors working and doing pickups on their own lines. It really forces the actors into conversations with each other through the scenes, and as a result, you get better, far more dynamic scenes that build in your mind.”

What’s next for The Vault of Horror is a second season that is hopefully just as riveting as the first. There is little doubt that it will be, considering the high production values and attention to detail that Bill infused the project with—and that with which the team carries on to honor his legacy.