“Five strangers meet in a tavern on the eve of the Ravnican New Year’s Festival. A mysterious man, a strange metal orb, and a pack of goons set the adventurers off on a collision course with destiny.”

Back in the 80’s, before computers and phones and computer games took over the world, people used to get together in person (otherwise known as “IRL”) and play a fantasy role-playing game called Dungeons and Dragons using actual physical items like dice and cards.

Fast forward to today. Computers have seemingly taken over every aspect of our lives, including and especially gaming. You’d think a quaint, established game like Dungeons and Dragons would be relegated to the trash heap.

Fantasy role-playing games are making a huge comeback in, of all things, the podcast space. Take, for example, Encounter Party!

“Encounter Party! is a podcast in which six professional voice actors battle through a Dungeons and Dragons campaign that’s been fine-tuned to edit out fluff and filler and deliver pure adventure in under-an-hour episodes,” said Ned Donovan, co-producer, actor, and business developer for Encounter Party!

You might also think a podcast about a Dungeons and Dragons campaign would not require a writer. Brian David Judkins, co-producer, Dungeon Master, and lead writer, would disagree.

“I approached Encounter Party! believing we had uncovered a different model for playing,” said Judkins. “Yes, it is a campaign. Yes, it is Dungeons and Dragons. Yes, there is a DM (Dungeon Master), but we structure our show more like a TV show. So we write campaigns and segments each with a beginning, middle, and end, and there are certain checkpoints along the way. It’s an entire story. And the people at the table improvise and contribute to it. So it’s sort of half-scripted, half-improvised.

“But there are planned moments, too. For instance, maybe at some point, and this is totally made up and not part of any of our storylines, the king is going to get assassinated. I know that is going to happen and will be a part of the story. What the players do with that information, though, I have no idea. They might decide to join the Rebellion or the Empire… I don’t know. How they choose to resolve it is up to them. So, my job is to basically write six different versions of the same story and figure out which one they’ve gone into. So, it’s more of a ‘Choose Your Own Adventure’ type of structure.

“The sad part of this process is that you end up writing a lot of content that just doesn’t make it into the story. But that’s where social media comes in.”

Donovan added: “There are many different avenues by which you can approach a show like Encounter Party! You can be player-focused, and build the show around the audience connecting with your actors. You can be character-focused, and really play around with things like the character’s backstory and how it affects the conversations we’re having. Or, you can be story-focused, which is how we present our show—it’s based on determining the best adventure we can provide the audience inside a mostly unscripted format. It’s allowed us to create a unique production system and editing process, as well, which has really resonated with our fans to date. 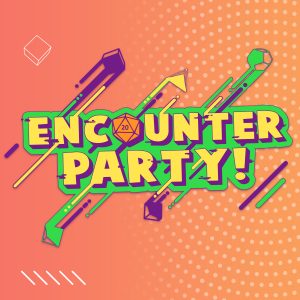 “Most of our marketing has been entirely grassroots, and we’ve been able to get well over a quarter-million downloads. We have a very good following across multiple countries and an extremely active fan base on Discord, Facebook, and Twitter. We have definitely found a place inside the Dungeons and Dragons podcast market that no one was really serving in the same way.”

Judkins continued: “When we first started looking at this genre a couple of years ago, it was just starting to gain momentum. The focus tended to be on the players and the personality base, which can be very entertaining. But ultimately, that’s not what this game is about. It’s a storytelling game. And we felt like so much of the entertainment aspect of this genre was leaving that behind. So, we decided to flip that around.”

Because they had such a specific vision as to what they wanted Encounter Party! to sound like, every part of the production process ended up being different from “the norm” in the audio drama space.

“During the creation of the show, we identified what we now call ‘the double casting experience.’ And it’s just like it sounds—you have to cast the show twice,” Judkins explained. “Because you can’t just cast the people who are going to be sitting at the table. You also have to cast the characters they’re going to be playing within the story that you’re trying to make. And so we also needed to find people who had some improvisational experience, because they would be better equipped for on-the-spot storytelling as opposed to just rehashing old tropes. We wanted them to be able to create something unique.

“But they also had to be expert players. That’s just the reality of it. Because when you’re in the gaming entertainment, you’re going to get a lot of people who are listening in expectation of learning how to be better, even in D&D. If you get to a point in this genre where your audience believes they are better at the game than you are, you’re just going to lose them. So, we had to make sure we had competent people who could keep the game flowing in a comprehensive manner.”

There are differences in recording and editing, as well.

“We do play live,” said Donovan. “We actually record our entire show in six-to-ten-hour days after flying everyone to a single location. We record the entire season. Even in 2020, we built a COVID bubble to do so. We record each season of the show live with everyone around the table and a sound engineer who makes sure the sound and dice rolls are good.

“We play straight and end up with between 70 and 80 hours of raw audio. That then gets edited down to between 20 and 25 hours of finished content.”

Who does the editing? “That would be me,” said Donovan.

Currently, there are three seasons available that encapsulate the entirety of the first campaign, and they are developing the second campaign for future release.